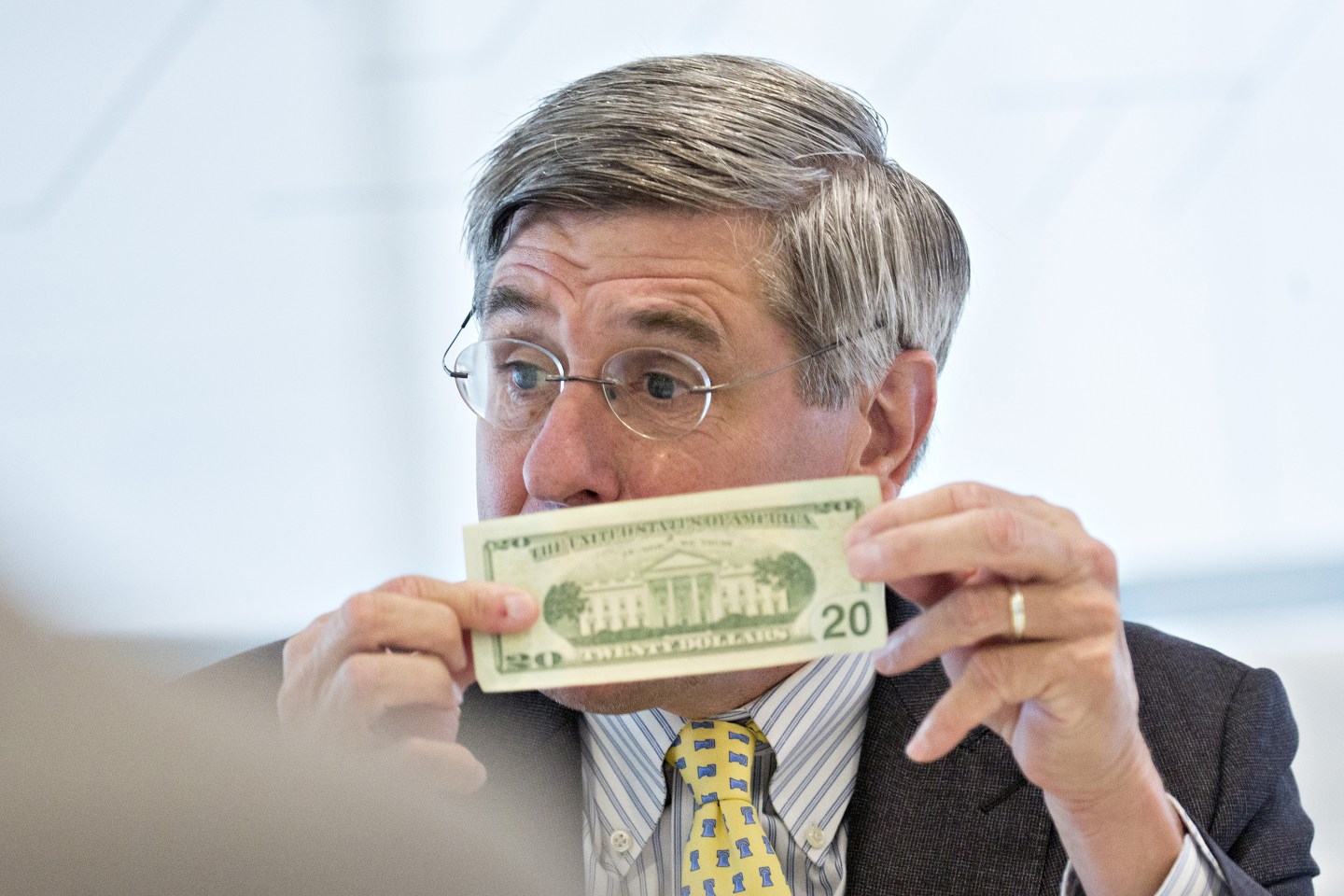 Stephen Moore, visiting fellow at the Heritage Foundation, holds up a $20 dollar bill while speaking during an interview in Washington, D.C., U.S., on Thursday, May 2, 2019. President Donald Trump's selection for the Federal Reserve Board of Governors, Stephen Moore, said he is "all in" for the central bank despite growing objections to his potential nomination among Senate Republicans. Photographer: Andrew Harrer/Bloomberg via Getty Images
Andrew Harrer/Bloomberg via Getty Images

Earlier this year, President Trump nominated Stephen Moore, an outspoken economist and former campaign adviser, to join the Federal Reserve and help manage the nation’s currency. The nomination fell short, however, and now Moore has decided to manage a different sort of currency: A digital “stablecoin” called Frax.

On Tuesday, Moore and his partners will formally announce plans for the coin, which will be pegged to the U.S. dollar so that its value will be more stable—hence its stablecoin moniker—than other cryptocurrencies like Bitcoin.

In an interview with Fortune, Moore said his libertarian views led him to support cryptocurrency, which he believes is an important alternative to state-backed money.

“I’ve followed monetary policy for 30 years and always been troubled by the government monopoly on currency, which is unhealthy for markets,” said Moore. “It’s very healthy for private competitors to challenge central banks over the money supply.”

Moore is the co-founder of Frax along with Sam Kazemian, an entrepreneur who launched a Wikipedia competitor that relies on blockchain technology to record entries. The pair say Frax will launch in the coming months, and will rely on the established blockchains—which create a tamper-proof public record—to record Frax transactions.

Frax, which has no outside investors for now, is not the first so-called stablecoin. For years, cryptocurrency traders have used a coin called Tether as a non-volatile dollar surrogate, while crypto exchanges like Coinbase have created stablecoins of their own. Meanwhile, Facebook’s controversial plan to introduce a currency calls for the creation of a stablecoin called Libra whose value will be pegged to a basket of major currencies.

Frax will be different than those stablecoins because it will rely on a fractional reserve—meaning it won’t be backed by a one-to-one pool of reserve dollars. Instead, the project will rely on algorithms to loan out its reserves and collect interest in order to ensure the value of Frax remains pegged to a dollar. According to the company, the loans will all be recorded on a blockchain, eliminating the need for a central bank.

This concept is so far unproven, and some argue that a stablecoin that lacks full one-to-one backing will eventually collapse if too many people try to sell it. Kazemian, however, argues that the loan mechanism built into Frax will ensure its stability.

The planned launch of Frax comes a year after the failure of a project called Basis backed by venture firm Andreessen Horowitz that raised $100 million to create a fractional reserve stablecoin propped up by an elaborate series of bond sales. The Basis project collapsed, however, under regulatory scrutiny and its founders reimbursed most of the funding.

The Frax co-founders, who met at a conference hosted by hedge fund manager and one-time Trump spokesman Anthony Scaramucci, said they are not daunted by the experience of Basis. They point to Moore’s decades of experience as an economist, as well as that of Ralph Benko, another member of the executive team who worked as general counsel in the Reagan Administration, as providing the appropriate expertise.

A need for a dollar-based digital currency?

The announcement of Frax also raises the question of the need for such a currency in the first place. According to Moore, who says he was approached by several other crypto projects, cryptocurrencies can be a valuable alternative when governments pursue misguided monetary policies.

Moore pointed to a proliferation of debt worldwide and warned that governments, as they have in the past, may try to deflate their currencies in order to pay back creditors. In his view, if consumers have the option to shift to alternate forms of money, governments may be deterred from deflationary policies in the first place.

For now, senior officials U.S. government officials, many of whom have expressed deep skepticism about cryptocurrencies, do not appear to share his view. In July, President Trump tweeted he was “not a fan of Bitcoin,”  and declared cryptocurrencies to be based on “thin air.” Meanwhile, Federal Reserve Chairman Jerome Powell caused the price of Bitcoin to tumble the same week after criticizing cryptocurrencies as facilitating money laundering.

Central banks in other countries, however, have been more to the potential of cryptocurrency. The Bank of Canada and the Bank of Japan, for instance, have been experimenting with crypto versions of their national currencies while Switzerland has created a special legal regime to foster cryptocurrencies.

“If I had been on the Fed, I would like to have seen encouragement for the development of cryptocurrencies like Frax. It can be a check and balance against runaway currencies,” he said.

—How to claim a cash settlement of up to $358 for Yahoo’s data breaches
—Now hiring: people who can translate data into stories and actions
—Is A.I. a trillion-dollar growth engine or a jobs-killer? There’s reason for optimism
Catch up with Data Sheet, Fortune’s daily digest on the business of tech.