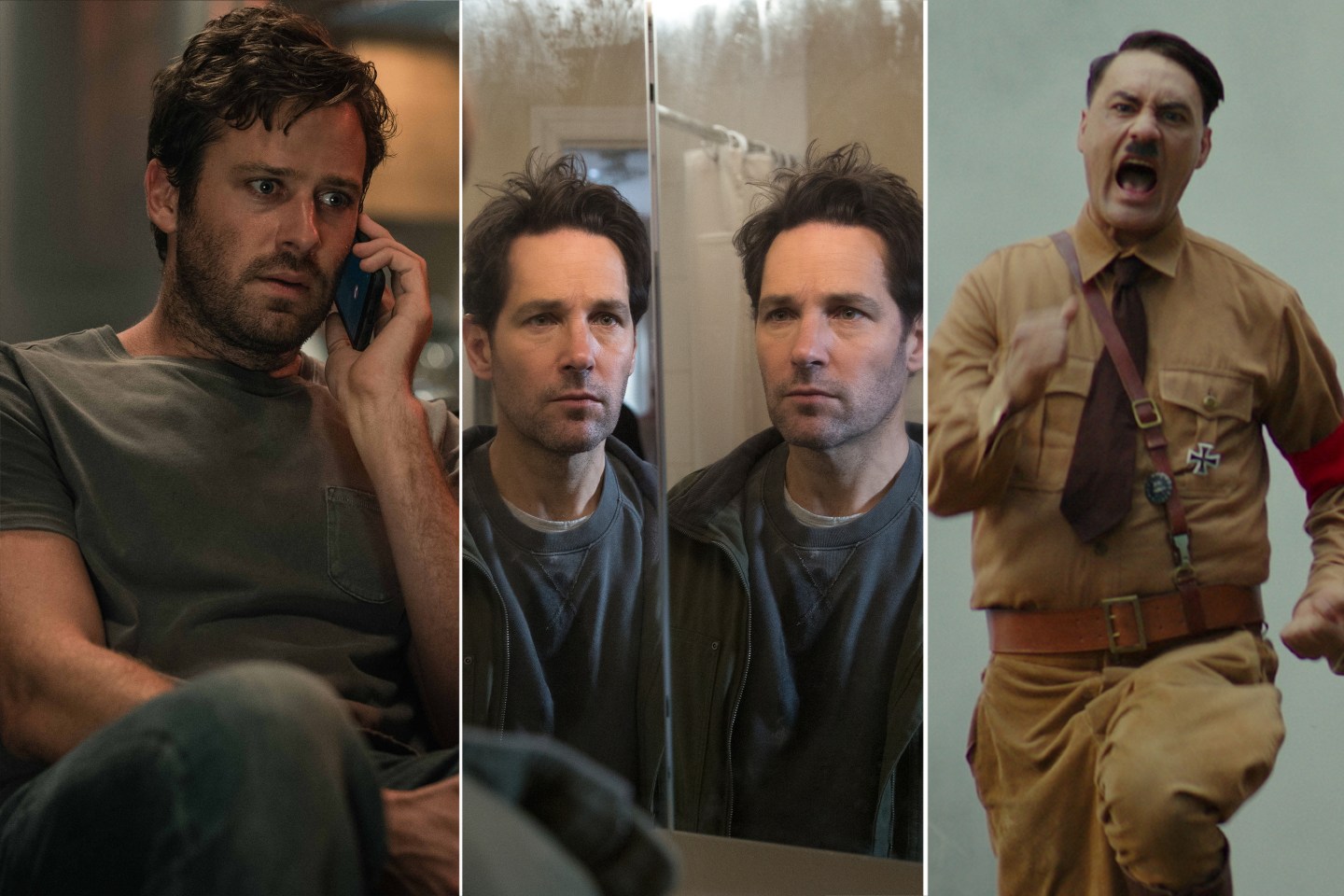 At first, Jojo Rabbit seems determined to make a mockery of history. When Taika Waititi’s “anti-hate satire,” as the Thor: Ragnarok director has called it, drops viewers in 1944 Berlin, Nazi soldiers stare up in admiration at the Fuhrer and The Beatles kick in on the soundtrack with “I Want to Hold Your Hand,” in German.

It’s a brazen, rather luridly entertaining match-up that makes you shake your head in disbelief, even as the edges of your mouth curl into a bemused smile.

That’s Jojo‘s whole disruptive aim, at least in its opening scenes. Waititi’s film centers on 10-year-old Johannes (Roman Griffin Davis), whose upbringing in a small German town has led him, naturally, to regard the Nazi party with complete awe and admiration. Johannes has an imaginary friend, who appears to him in times of trouble or anxiety, to boost his self-esteem and help him out at school. Again naturally, that imaginary friend assumes the form of Johannes’s number one idol: Adolf Hitler (played by Waititi as a high-spirited buffoon).

Jojo Rabbit is audacious in a few ways more interesting than its inclusion of Hitler as a young boy’s imaginary confidante, but that dynamic does set the quirky tone, with Johannes being described by his mustached, genocidal bestie as “the most loyal little Nazi I ever met” before heading off to a training weekend where he meets grumbling Nazi leaders (Rebel Wilson and Sam Rockwell), hangs out with his real-life best friend (Archie Yates), and manages to get in a gruesome accident. Housebound, young Jojo has only his mother (Scarlett Johansson) for company—that is, until he discovers a young woman (Leave No Trace‘s Thomasin McKenzie) upstairs, secretly living in their walls.

Waititi flies close to the sun throughout what follows, as Johannes considers turning in the Jew his mother’s been harboring and Jojo Rabbit considers exactly what kind of a movie it wants to be. But ultimately, Waititi takes the easy way out, and the film chugs along as a surprisingly sweet coming-of-age story. Johannes grows close to (and infatuated with) the unexpected houseguest as she teaches him how to be a good man in times when bad ones feel plentiful. It’s all tidily twee and resolutely pat, feel-good fun for the whole family—and far less of a satire that it believes itself to be. Real satire provokes viewers, poking holes in their preconceptions in such a way as to enrage but ultimately enlighten. Another Beatles song, “All You Need Is Love,” is about the only point Jojo Rabbit has to make, even if it does so with a marvelous, winning geniality.

Hollywood struggled, for a time, to figure out Armie Hammer. With his piercing, baby-blue eyes and a jaw likely chiseled from marble, the actor was an immediate heartthrob, and studios moved swiftly to plant him atop any franchise in need of a leading man.

But Hammer’s best roles have left space for darker, more twisted emotions to roil away beneath that picture-perfect exterior: the Winklevoss twins, generational privilege incarnate, in The Social Network; Ilya Kuryakin, a ticking-time-bomb KGB agent, in The Man from U.N.C.L.E; Steve Lift, a vapidly villainous CEO, in Sorry to Bother You.

Could it be that Hammer, either armed or cursed with a movie star’s good looks, possesses the bizarro soul of a character actor? Wounds, a body-horror freakout from Under the Shadow helmer Babak Anvari, certainly makes that case.

Hammer stars as Will, who bartends at Rosie’s, the kind of grotty watering hole where bottles get smashed and patrons tossed out with some regularity. He’s quietly enamored of one regular—an ex played by Atlanta‘s Zazie Beetz—and scheming to win her away from a bleary boyfriend (Karl Glusman), ideally without infuriating his longtime girlfriend (Dakota Johnson), who never comes in to drink. Hammer’s great in these early scenes, embodying Will as a slacker type who’s been coasting for too long to buckle down into any sense of responsibility. When the bar gets rowdy one night, Will picks up a phone left by college kids, only for it to begin receiving messages about cursed books and monstrous tunnels—as well as a disturbing photo of what looks to be a full set of teeth, strewn bloodily in a pile.

From there, Wounds gets much, much nastier, with Will’s life splintering as he begins to experience visions—of women’s severed heads on plates, cockroaches swarming from every crevice, impossibly tiny hands wriggling out of human skulls. Something’s wrong with him physically, too; there’s a grotesque wound at his armpit, and his girlfriend diagnoses him with a soul-deep emptiness. “There’s nothing there to satisfy,” she says, coldly. What, then, is moving under his skin?

Anvari, taking a story that’s essentially a delivery system for gut-twisting jump-scares, brings Wounds to creeping, crawling life with visual flair and imagination. Even when you know something terrible is hidden in the inky expanses of one dark corner, the director finds unusual ways to bring it bursting out. He’s after something less articulate and more guttural with Wounds, splicing David Cronenberg together with Nicolas Roeg and pilfering Guillermo Del Toro’s bug fetish for good measure. It all leads to one of the most disturbing, icky final sequences of the year, a tour de force of entomological terror that leaves enough unsaid to later linger in the subconscious.

SKIP IT: ‘Living With Yourself’ (Netflix)

It’s unfortunate when the easiest pun lines up best with reality, but in the case of Paul Rudd’s new half-hour comedy series on Netflix, “rudderless” does about cover it.

Living With Yourself takes a high-concept premise (Paul Rudd, cloned, in suburbia) and spins it out to series length without grace, wit, or even much by way of overarching narrative vision. Owing to this, it’s in some ways the platonic ideal of a Netflix-bloat comedy, reminiscent of Flaked and Disjointed in how strong it starts and quickly it stalls.

Rudd—playing a dreary lost-in-his-own-life type, whose visit to an elite spa results through mishaps in him bringing home a mirror image—is an actor whose easy, sleepy charm works wonders in an ensemble. Watch him in Anchorman, holding his own within a crew of pushier, more preening personalities. His funniest role might be as dopey-horny camp counselor Andy in Wet Hot American Summer, a stoned-cold comedy classic with an impossibly stacked cast. Even in Ant-Man, his inaugural Marvel superhero outing, Rudd’s at his most likable bouncing off co-stars (curmudgeonly Michael Douglas, incredulous Michael Peña, wryly screwball Evangeline Lilly).

But in Living With Yourself, not only starring but trying to carry off a two-hander with himself, Rudd’s typically free-flowing charisma eventually runs dry. It might have something to do with the actor’s performance, which struggles to gradate his dueling selves beyond the physical, with hair that shifts from greasy to well-coifed, and outfits that spiff up or down. Both Rudds end up in competition for his ad-executive job and exceedingly lovely wife, played by Aisling Bea, and the characters are too evenly matched in the sense that they prove scarcely deserving of either. But the scripts here are the real problem, aimless and scattershot, eventually sapping Rudd of comic and dramatic convictions both.

Hailing from former Daily Show executive-producer Timothy Greenberg, Living With Yourself rides a wave of similarly-calibrated streaming series that ask, “What if Black Mirror, but jokes?” Similarly mediating middle-class ennui with a sci-fi twist, Russian Doll emerged as one of the year’s finest new series; Forever let a couple work through relationships doldrums in the afterlife, while Maniac went full bore into pharmaceutical-induced psychedelia until its protagonists settled for a real human connection. With its creative setup, moral quandaries, and functional visual style (overseen by Little Miss Sunshine directors Jonathan Dayton and Valerie Faris), Living With Yourself especially recalls The Good Place, even if it ultimately lacks the courage (or perhaps just intelligence) to follow through on answering its trickier questions.

The series veers off the rails by episode four, and with eight in total, it’s dismaying how long it takes Living With Yourself to get back to anything resembling a central point. Its finale sets up a different kind of show, one its creator might believe more interesting, but it’d be surprising if anyone still with Living after a freshman run this unfulfilling shares that opinion.

—Will Zombieland: Double Tap be a Halloween hit?
—And the 2020 Oscar for Best Picture will go to…
—Why Parasite became the film everyone’s talking about
—The best movies that came out of the 2019 New York Film Festival
—Kevin Smith isn’t done being ridiculous just yet
Follow Fortune on Flipboard to stay up-to-date on the latest news and analysis.