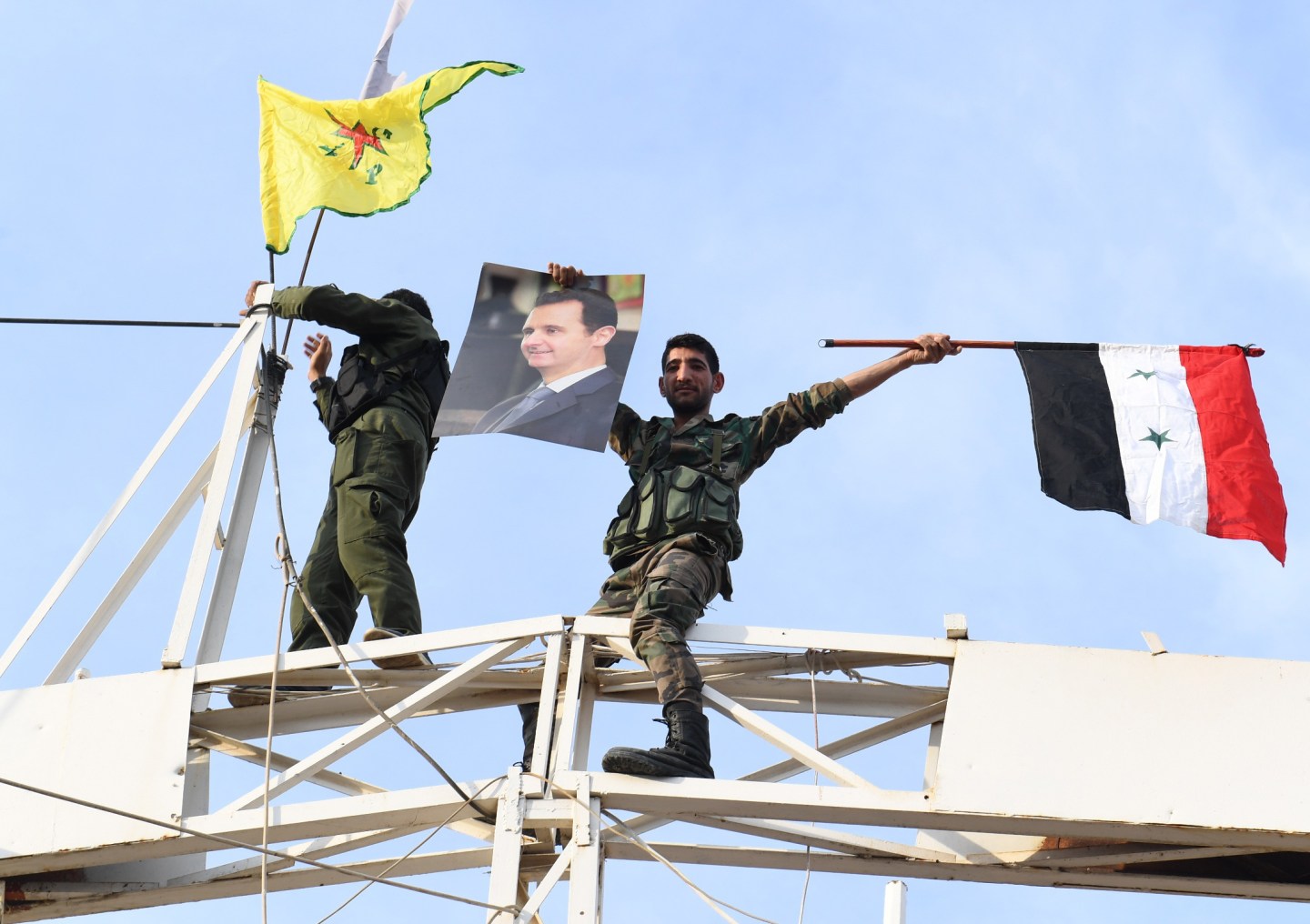 Claiming new progress against Islamic State extremists in Syria, President Donald Trump said Friday that some European nations are now willing to take responsibility for detained IS fighters who are from their countries.

“Anyway, big progress being made!!!!” he exclaimed on Twitter. A day earlier, he had proclaimed a U.S.-brokered ceasefire deal with Turkey marked “a great day for civilization,” although the deal’s effect was largely to mitigate a foreign policy crisis widely seen to be of his own making.

Amid Trump’s enthusiasm were reports that fighting between Turkey and Syrian Kurdish forces had not ended. The Kurds, former U.S. allies in the fight against the murderous Islamic State in Syria, came under assault after Trump ordered U.S. troops to leave the area earlier this month.

However, Trump appears to think peace is in the wings between Turkish troops and the Syrian Kurds. After speaking with Turkish President Recep Tayyip Erdogan, Trump tweeted: “He told me there was minor sniper and mortar fire that was quickly eliminated.” Trump added, there is “good will on both sides.” He said, “The U.S. has secured the Oil & the ISIS Fighters are double secured by Kurds & Turkey.”

Later, in comments to reporters, Trump again spoke of taking oil. “We’ve taken control of the oil in the Middle East,” he said. White House officials had no immediate explanation for the comment, which seemed disconnected to any known developments in Syria or elsewhere in the Middle East.

Trump said nothing further about the European nations he contended had agreed to take some of the IS fighters.

Leading U.S. lawmakers are displeased with Trump’s efforts regarding Turkey and the Syrian Kurds.

Sen. Mitt Romney, the Republicans’ presidential nominee in 2012, said he welcomed the ceasefire, but it “does not change the fact that America has abandoned an ally.”

While the ceasefire seemed likely to temporarily slow legislation in Congress aimed at punishing Turkey and condemning Trump’s U.S. troop withdrawal, lawmakers gave no sign of completely dropping the measures.

Shortly before the announcement of the pause in hostilities, Republican Sen. Lindsey Graham and Democrat Chris Van Hollen introduced legislation that would bar U.S. military aid to Turkey, seek to curb foreign arms sales to Ankara, and impose sanctions on top Turkish officials unless Turkey withdraws its forces.

At the Pentagon, Defense Secretary Mark Esper said U.S. troops are continuing their withdrawal from northern Syria. He also said no U.S. ground troops will participate in enforcing or monitoring the ceasefire that Vice President Mike Pence announced Thursday in Ankara.

“The force protection of our service members remains our top priority and, as always, U.S. forces will defend themselves from any threat as we complete our withdrawal from the area,” Esper told reporters.

Officials have said a number of ISIS fighters, likely just over 100, have escaped custody since Turkey launched its invasion last week.

Meanwhile, the ceasefire agreement reached in Turkey, in contrast with Pence’s description of creating a limited safe zone, would effectively create a zone of control patrolled by the Turkish military, which Ankara wants to stretch for the entire border from the Euphrates River to the Iraqi border. Turkish forces currently control about a quarter of that length, captured in the past nine days.

The rest is held by the Kurdish-led forces or by the Syrian government military, backed by Russia, which the Kurds invited to move in to shield them from the Turks. None of those parties has much reason to let Turkish forces into the areas.

After hours of negotiation in Ankara with the U.S., Turkey agreed to a temporary halt of its deadly attacks on Kurdish fighters in northern Syria, but some fighting continued early Friday in a northeast Syrian border town.

Pence, who reached the deal with Erdogan, hailed the agreement as the way to end the bloodshed caused by Turkey’s invasion.

But he remained silent on whether it amounted to a second abandonment of America’s former Kurdish allies, many of whom are branded as terrorists by Ankara. The deal includes a conditional halt to American economic sanctions and no apparent long-term consequences for Turkey for its actions.

Regarding the ceasefire, Danielle Pletka, vice president for foreign and defense policy studies at the American Enterprise Institute, tweeted, “This is a respite while we surrender to Turkish domination of Northeast Syria.”

Turkey achieves most of military goals

Turkish troops and Turkish-backed Syrian fighters launched their offensive against Kurdish forces in northern Syria a week ago, two days after Trump suddenly announced he was withdrawing the U.S. military from the area.

Trump was widely criticized for turning on the Kurds, who had taken heavy casualties as partners with the U.S. in fighting IS extremists since 2016.

While U.S. officials have insisted Trump did not authorize Turkey’s invasion, the ceasefire codifies nearly all of Turkey’s stated goals in the conflict.

Turkish Foreign Minister Mevlut Cavusoglu said the United States had accepted the idea of a safe zone long pushed by Turkey, and he insisted Turkish armed forces will control the zone. He also made clear that Turkey will not stop at a previously limited zone; he said Turkish control of the Syrian side of the border must extend all the way to the Iraqi border.

The Turkey-Syrian Kurd conflict arises from Ankara’s long-time perception the Kurdish fighters are nothing more than an extension of Turkey’s Kurdistan Workers Party, or PKK. The PKK has waged a guerrilla campaign inside Turkey since the 1980s and which Turkey, as well as the U.S. and European Union, designate as a terrorist organization.

Caught in the middle, the commander of Kurdish-led forces in Syria, Mazloum Abdi, told Kurdish TV, “We will do whatever we can for the success of the ceasefire agreement.” But one Kurdish official, Razan Hiddo, declared that Kurdish people would refuse to live under Turkish occupation.

In the meantime, the Kurds have invited help from the Syrian government military, backed by Russia, to shield them from the Turks.

Nevertheless, Trump seemed to endorse the Turkish aim of ridding the Syrian side of the border of the Kurdish fighters. “They had to have it cleaned out,” he said.

In the negotiations, a senior U.S. official said, Pence and national security adviser Robert O’Brien expressed condolences to Erdogan and his military commanders over their dead and injured in the weeklong campaign.