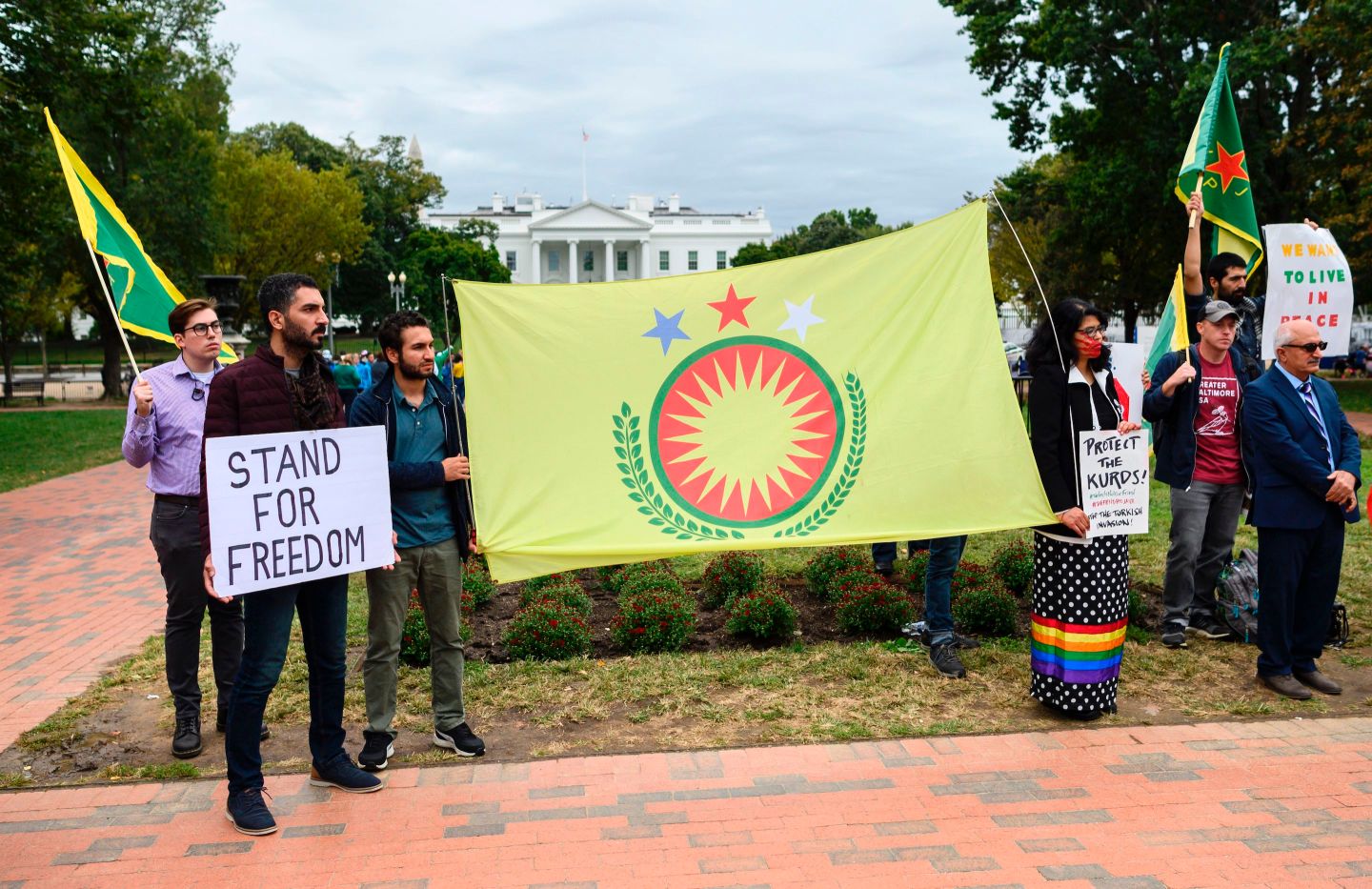 Protesters demonstrate against US President Donald Trump's decision to withdraw US troops from northeastern Syria in front of the White House in Washington, DC on October 8, 2019. - The top Republican in Congress warned that an abrupt pullback of US troops from Turkey's border with Syria would only benefit Russia, Iran and President Bashar al-Assad's government in Damascus. Senate Majority Leader Mitch McConnell became the most senior lawmaker in Donald Trump's party to oppose the president's announced decision to withdraw from certain positions in northern Syria, one that effectively abandons the Kurds, one of Washington's main allies in the war against Islamic State group militants. (Photo by Andrew CABALLERO-REYNOLDS / AFP) (Photo by ANDREW CABALLERO-REYNOLDS/AFP via Getty Images)
Andrew Caballero-Reynolds—AFP/Getty Images

In a span of 24 hours, President Donald Trump moved from threatening to obliterate Turkey’s economy if it invades Syria to inviting its president to visit the White House.

But Trump did not back away Tuesday from a plan to withdraw American troops from Syria as he tried to persuade Turkey not to invade the country and attack the U.S.-allied Kurds—a needle-threading strategy that has angered Republican and Democratic lawmakers and confused U.S. allies.

Trump tweeted that while U.S. forces “may be” leaving Syria, the U.S. has not abandoned the Kurds, who stand to be destroyed if Turkey follows through with its planned invasion. The Kurds lead a group of Syria fighters who have been steadfast and effective American allies in combating the Islamic State in Syria. Turkey, however, sees the Kurds as terrorists and a border threat.

Joseph Votel, a retired Army general who headed Central Command’s military operations in Syria until last spring, wrote on The Atlantic website Tuesday that mutual trust was a key ingredient in the U.S. partnership with the Kurds.

“The sudden policy change this week breaks that trust at the most crucial juncture and leaves our partners with very limited options,” Votel wrote.

Jonathan Schanzer, a Syria scholar at the Foundation for the Defense of Democracies, said even a limited Turkish incursion into northern Syria could quickly escalate.

“The president is doubling down on this—seems to be reversing course,” Schanzer said. “He’s trying to convey to the American people that he’s made the right decision. Of course, (Turkish President Recep Tayyip) Erdogan is going to see this as a green light.”

The confusion began Sunday when the White House issued a late-night statement saying U.S. forces in northeastern Syria would step aside for what it called an imminent Turkish invasion. The statement made no mention of U.S. efforts to forestall the invasion, leading many to conclude Trump was, in effect, turning a blind eye to a slaughter of Kurds.

On Monday, amid criticism from some of his staunchest Republican supporters, including Senate Majority Leader Mitch McConnell, Trump suggested he was washing his hands of the Syria conflict, saying in a tweet that “it is time now for others in the region…to protect their own territory.”

But he also threatened to “totally destroy and obliterate the Economy of Turkey” if its military action in Syria went too far.

Administration officials argue Trump’s strategy is in response to Erdogan’s insistence, during a Sunday phone call with Trump, that he was moving ahead with a military incursion into Syria. Erdogan seemed to have rejected a joint U.S.-Turkish plan, already being carried out, to create a buffer zone on the Syrian side of the border to address Turkey’s security concerns. The execution of that plan included dismantling some Kurdish defensive positions on the Syrian side of the border.

Without initially saying his administration was still trying to talk Erdogan out of invading, Trump ordered the 50-to-100 U.S. troops inside that zone to pull back for safety’s sake. He then emphasized his desire to withdraw from Syria entirely, although no such broader pullout has begun.

According to U.S. officials, Turkish troops on Tuesday were massed along the border in apparent preparation for an incursion across the border. But they said, so far, there have been no signs of an actual assault beginning.

The officials, who were not authorized to discuss details of military intelligence, said there are between 5,000 and 10,000 Turkish troops along the border apparently ready to go. The officials said they expect the Turks to begin with airstrikes, followed by barrages from heavy artillery along the border and the movement of ground troops into Syria.

Kurdish forces have some air defenses, such as shoulder-launched surface-to-air missiles, but would be outgunned by the Turks.

Trump has boasted about U.S. success in defeating the so-called Islamic State, but his critics now accuse him of abandoning a U.S. ally, setting the Kurds up to be killed. They also worry that if the Kurds end up fighting Turkish forces, they won’t be able to guard detention centers in Syria that house thousands of captured IS fighters.

Trump supporters say the president’s threat of sanctions could make Erdogan second-guess his planned incursion or perhaps limit it so as not to be slapped with financial penalties that would hurt the Turkish economy. Trump on Monday said he was fulfilling a campaign promise to withdraw from “endless war” in the Middle East, and he warned Turkey that he would ruin its economy if any American personnel are harmed.

Striking a notably friendlier tone, Trump on Tuesday said Erdogan will visit the White House on Nov. 13. He defended Ankara as a big U.S. trading partner, saying it supplies steel for F-35 fighter jets. In fact, the Trump administration removed Turkey from the F-35 program last summer because the Turks refused to cancel the purchase of a Russian air defense system that is incompatible with NATO forces. As part of that process, the U.S. will stop using any Turkish supplies and parts by March 2020.

Trump said Turkey understands that “any unforced or unnecessary fighting by Turkey will be devastating to their economy and to their very fragile currency.”

Turkey’s vice president said his country won’t bow to threats in an apparent response to Trump’s warning to Ankara about the scope of its planned military incursion into Syria.

Fuat Oktay said in a speech Tuesday that Turkey is intent on combatting Kurdish fighters across its border in Syria and on creating a zone that would allow Turkey to resettle Syrian refugees there.

“Where Turkey’s security is concerned, we determine our own path, but we set our own limits,” Oktay said.

—Divided Supreme Court weighs LGBTQ workplace discrimination
—Trump blocks U.S. diplomat from testifying in impeachment inquiry
—A California city tested universal basic income. Here’s how recipients spent the $500
—5 lessons history has taught us about impeachment
—Why an end to the U.S.-China trade war could be close
Get up to speed on your morning commute with Fortune’s CEO Daily newsletter.