The Great Bacon Shortage of 2020? China’s Pork Crisis Could Hit US Supermarket Shelves 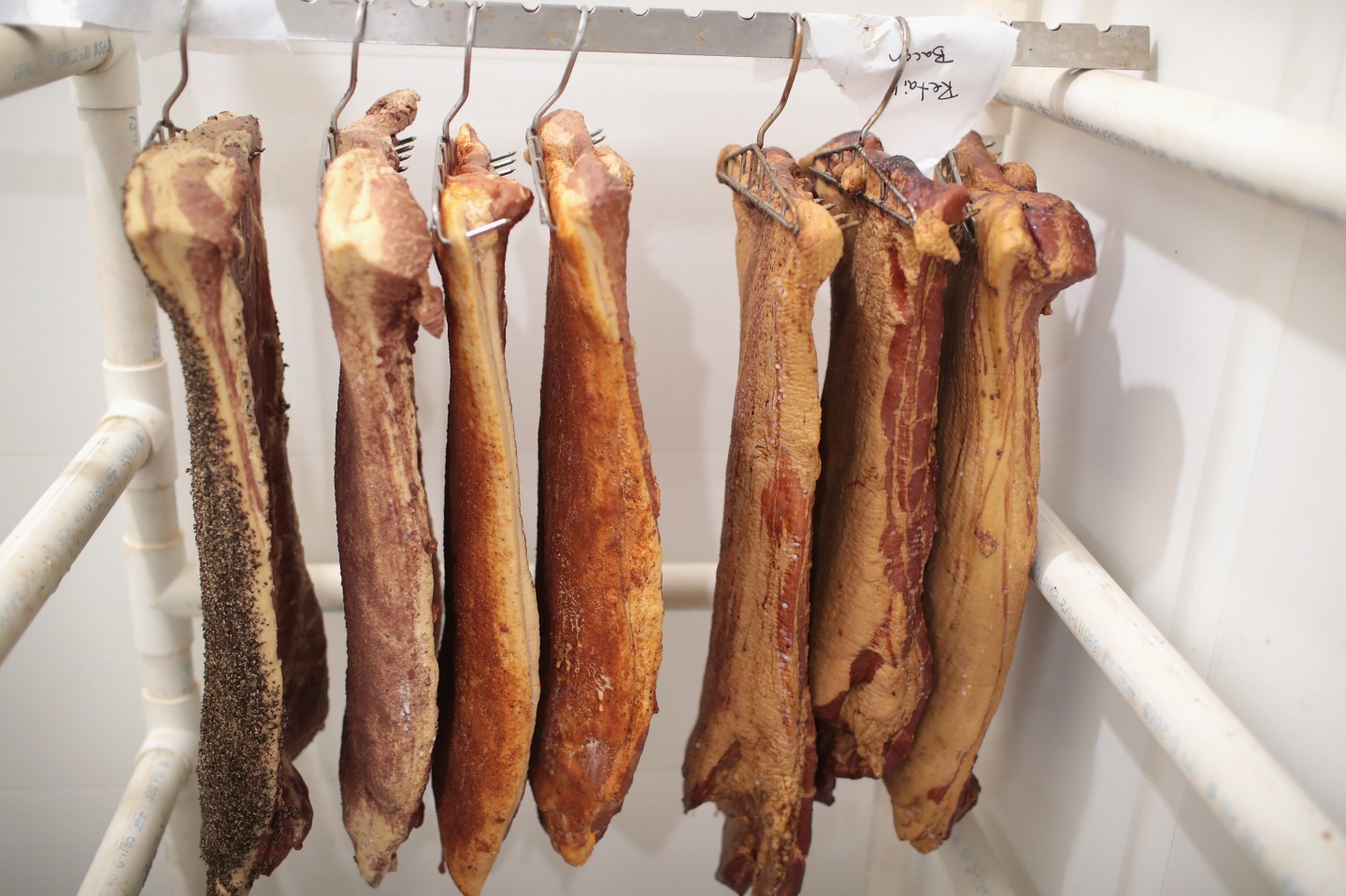 ELMA, IA - JULY 25: Workers smoke bacon while helping to process hogs at Elma Locker & Grocery on July 25, 2018 in Elma, Iowa. The locker custom butchers hogs and cattle and other livestock for area customers. According to the Iowa Pork Producers Association, Iowa is the number one pork producing state in the U.S. and the top state for pork exports. The state sends about 50 million hogs to market each year and its pork exports totaled more than $1.1 billion in 2017. Pork producers in Iowa are bracing for the impact a trade war with China and Mexico may have on their bottom line going forward. (Photo by Scott Olson/Getty Images)
Scott Olson—Getty Images

It’s scary news for bacon fans: The U.S. could see tight supplies, or even some shortages of pork bellies along with ham next year as the spread of a pig-killing disease in China ripples through the global market.

That’s according to Smithfield Foods Inc., the world’s biggest pork producer. While China’s hog crisis hasn’t had much impact on the U.S. market yet, that could change in 2020 as the Asian nation is forced to increase imports even more in the face a prolonged protein deficit, said Arnold Silver, director of raw materials procurement at Smithfield, which is owned by Hong Kong-listed WH Group Ltd.

The Chinese “are insatiable in their appetite for pork,” Silver said at the Urner Barry Global Protein Summit in Chicago, which took place Monday and Tuesday.

Smithfield will prioritize supplying its long-held U.S. customer base before directing meat for export to China, Silver said. But strong demand from Asia means more U.S. pork exports could flow to the Asian country, and some cuts of meat could face particular tightness. China often buys whole or half carcasses. However, hams will also be especially in demand, Silver said.

That outlook comes even as China maintains its retaliatory tariffs against U.S. pork shipments. If the duties are lifted, American exports will increase even more, Silver said.

The U.S. Meat Export Federation also expects increased Chinese buying in 2020. American pork exports to China will likely see 12% growth in 2019 and 13% growth in 2020, reaching 3.1 million metric tons, Erin Borror, an economist with the group, said at the Urner Barry conference. That forecast assumes the trade war will persist.

If Chinese buying takes off, there are limitations to how quickly producers can ramp up supplies, Smithfield’s Silver said. Output was able to grow 4% this year, but the rate will likely drop to 2% in 2020, he said.

African swine fever has killed millions of hogs in China and elsewhere in Asia, sparking the need for more imports. China’s pork production will probably be down 32 million tons or more in 2020, Brett Stuart, founding partner of consultant Global AgriTrends, said Monday at the Chicago conference. The spread of the pig disease has created a “a once-in-a-lifetime opportunity,” for U.S. farmers, the National Pork Producers Council has said as it lobbied for a trade deal with China that would remove tariff barriers.

—10,000 jobs on the line as HSBC mulls its future in Europe
—Hong Kong’s mask ban pits anonymity against the surveillance state
—The world’s biggest turbines and no subsidies: how offshore wind is entering a new era
—The global phenomenon of “American Sriracha”
—Plant-based meats have huge potential in China, but Beijing wants a homegrown champion
Catch up with Data Sheet, Fortune’s daily digest on the business of tech.