Starbucks in Hong Kong: Caught in the Crossfire 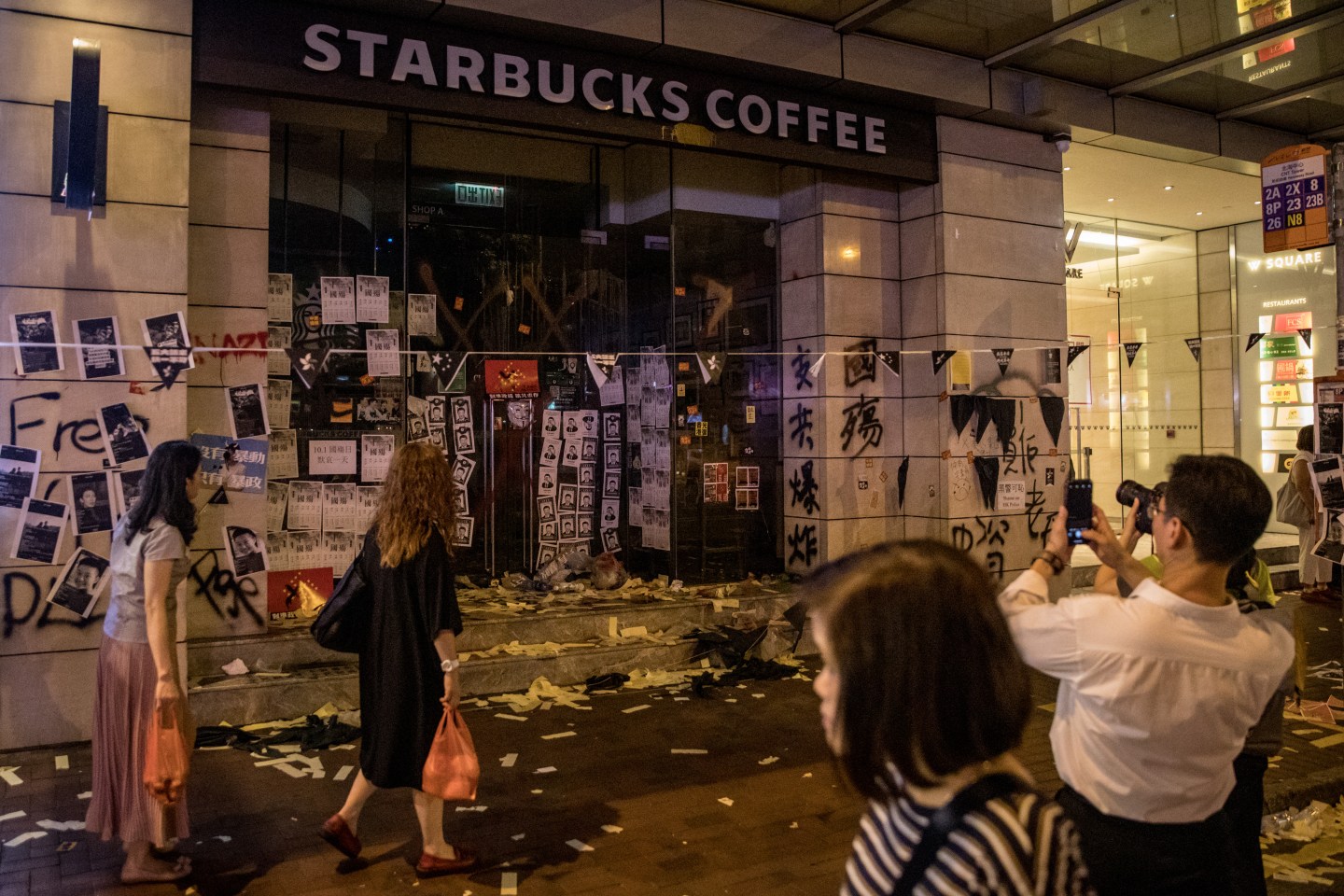 HONG KONG, CHINA - OCTOBER 01: People take photographs of a Starbucks shop damaged by pro-democracy protesters during clashes with police on October 01, 2019 in Hong Kong, China. Pro-democracy protesters marked the 70th anniversary of the founding of the People's Republic of China in Hong Kong through demonstrations as the city remains on the edge with the anti-government movement entering its fourth month. Protesters in Hong Kong continue its call for Chief Executive Carrie Lam to meet their remaining demands since the controversial extradition bill has been withdrawn, which includes an independent inquiry into police brutality, the retraction of the word “riot” to describe the rallies, and genuine universal suffrage, as the territory faces a leadership crisis. (Photo by Chris McGrath/Getty Images)
Chris McGrath—Getty Images

As thousands in Hong Kong took to the streets on Tuesday in counter-protests to Beijing’s Oct. 1 celebrations of 70 years of communist rule, a small group of protesters dressed all in black gathered in the middle of the afternoon outside of a Starbucks on Hennessey Road, clutching umbrellas and cans of spray paint.

Five of them then stood around in a circle and opened up their umbrellas to provide cover for one protester who tagged the store’s windows with derogatory slogans about China and phrases such as 美心黑心 (a phrase that rhymes in Chinese and means ‘Maxim’s has a black heart’). Seconds later, the group disappeared, seamlessly slipping into the masses marching down the street.

This store, along with other Starbucks locations throughout the city, would fall prey to similar assaults during the day, leaving multiple storefronts defaced and tattered.

Like many Hong Kong businesses caught up in the clashes between protesters and police and their negative effects on the local economy, Starbucks’ storefronts are collateral damage in the battle over control of the island territory. But they are also an example of the delicate balance international chains must walk as they weigh Hong Kong’s push for democracy against the opportunities in China’s growing market.

‘Maxim’s has a black heart’

In conversations with Fortune, several protesters who spray-painted one Starbucks location expressed anger not towards Starbucks per se, but at Maxim’s Group, which owns Starbucks licenses in Hong Kong and Macau.

“We have to stop buying anything from Starbucks and Maxim’s in order to decrease their business,” said one of the protesters, who withheld her name in fear of police retribution. “We [spray-paint the store] because we want this company to cut away from Maxim’s. We want to go after all of Maxim’s companies,” said another.

In recent weeks, Maxim’s Group has come under fire for its perceived pro-Beijing ties, and specifically because the daughter of Maxim’s founder, Annie Wu, spoke out against the protest movement to the United Nations Human Rights Council.

“For the last 6 months, Hong Kong has become has become a place for riots,” she said in an interview with CGTN about the meeting while reiterating her support for the Hong Kong police force in helping “maintain law and order” in the city.

Through vandalism, boycotts, and other means, protesters have also targeted dozens of other Maxim’s shops as well as countless stores with explicit ties to the mainland, such as China Mobile and Bank of China.

Protesters have further ramped up pressure in recent days as Hong Kong activist Joshua Wong demanded that Starbucks “consider whether Maxim’s truly represents the social values of Starbucks and terminate the [relationship with] Maxim’s immediately.” He included a link to a petition that has collected nearly 55,000 signatures at the time of publication.

Both Starbucks and Maxim’s Group declined to comment to Fortune on the recent protests, though Maxim’s recently released a statement distancing itself from the controversy. “Ms. Wu is not employed in any position or capacity at the company,” the statement read.

David Ahlstrom, Professor at The Chinese University of Hong Kong’s Business School, believes that there is only so much Starbucks is able to do at this point.

“It’s a complex situation, and I don’t think the companies have a big role to play,” Ahlstrom said. “It’s kind of a wait and see [situation] with Starbucks.”

For Starbucks, the politicization of their Hong Kong stores comes at an inopportune moment, as they plan further expansion into China in the face of new, homegrown competition.

The approximately 170 Starbucks outlets in Hong Kong pale in comparison to mainland China, where Starbucks has already opened 4,000 stores in over 160 cities, with plans to reach 6,000 outlets by 2022. And unlike in Hong Kong, Starbucks fully owns its outlets in China.

This means that as the protests in Hong Kong forge on, Starbucks’ main concern may be to appease authorities in the Chinese government. Shaun Rein, the managing director of China Market Research, recently told the Financial Times that Starbucks “can’t do anything to alienate Beijing.”

This may be especially true given that Starbucks’ hold on China’s coffee market may be as tenuous as ever. Since opening its first outlet in 2018, Chinese start-up Luckin Coffee has already opened 3,000 stores across China; it plans to have 4,500 in operation by the end of this year, and 10,000 by 2021.

Luckin hopes that their strategy of lower price points and technological convenience will help them surpass Starbucks’ growth. At the same time, the overall coffee market in China grew from $2.7 billion in 2014 to $5.8 billion in 2018, meaning that there may be room for both competitors going forward.

Still, by focusing on steady improvements and long term growth Starbucks may be able to navigate both increased competition in China as well as its current crisis in Hong Kong. “Starbucks is a careful and active innovator in its area and I expect that to continue,” Ahlstrom said.

For now, Starbucks will likely stay as far as possible from its current political problems in Hong Kong. Cutting ties from Maxim’s, as protesters demand, could anger Beijing, as it would be seen as kowtowing to their demands. On the other hand, publicly reaffirming support for Maxim’s may spur further backlash from protesters, which Maxim’s itself has no interest in being caught up in.

In the meantime, Starbucks’ Hong Kong storefronts will likely continue to suffer.

“[Starbucks] supports China, so we are not going to support them,” one protester said on Tuesday. “Yeah, we’ll [spray-paint] every Starbucks,” said another.