‘Hong Kong Is a Disaster’: As Protesters and Police Clash, Retail Sales Take a Record Plunge 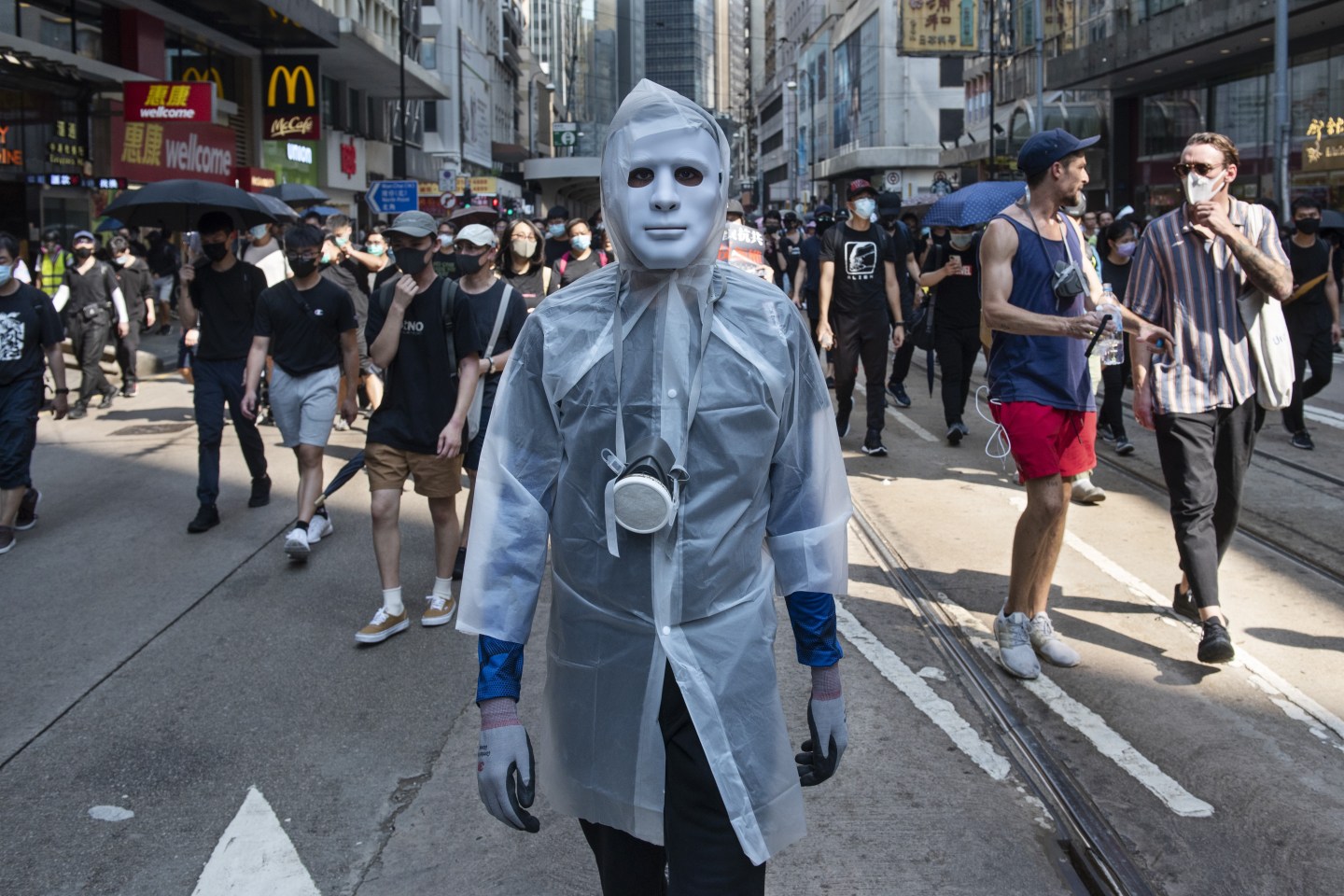 HONG KONG, CHINA - OCTOBER 02: A protester wears a white raining coat and mask during a rally as thousands of anti-china protesters marched and clashed with police in Hong Kong as the party celebrated its 70th year of rule on October 02, 2019. (Photo by Miguel Candela Poblacion/Anadolu Agency via Getty Images)
Miguel Candela Poblacion—Anadolu Agency via Getty Images

Months of protests in Hong Kong are taking an increasing toll on the city’s economy, with retail sales declining by a record amount in August.

The protests and the police response — both of which are becoming more violent — have slammed the tourism industry, with visits from mainland China down 42% in August. That collapse has affected Hong Kong’s status as a shopping hub, with data released Wednesday showing a year-on-year decline in the value of retail sales of 23%. A government spokesman said the result was the worst ever.

Luxury goods such as jewelry and watches are common purchases by mainland tourists, and the value of those sales slid by almost half in August. As the protests drag on and tourists and shoppers stay at home, retailers are having staff take unpaid leave, with some reportedly planning layoffs. Meanwhile, some landlords are slashing rents.

The unrest in Hong Kong is dragging down the luxury industry globally, and brands are re-examining their presence in the city, said analysts.

Bain & Co now sees the global luxury sector growing this year at the low end of the 4% to 6% range, according to analyst Claudia d’Arpizio, while RBC Capital Markets analyst Rogerio Fujimori estimates that most brands will suffer a sales drop in Hong Kong of between 30% and 60% during the third quarter.

The city’s days as a luxury hub are numbered, said Jefferies Ltd. analyst Flavio Cereda, and brands are likely to rethink their presence there. Prada SpA is leading the exodus and plans to close its largest Hong Kong location in Causeway Bay after its lease expires next year.

“Hong Kong is a disaster, like for everybody” said Miuccia Prada, the company’s designer and co-CEO, in an interview after a runway show in Paris on Tuesday.

The Italian company is shifting some marketing investments from Hong Kong to mainland China in the hopes of making up some of the lost sales there, said Lorenzo Bertelli, Prada’s son who is the company’s head of digital communication.

The city’s economy likely entered a technical recession in the third quarter, Financial Secretary Paul Chan said in September. Chan said earlier this week that the government would introduce more stimulus if needed, in addition to higher spending on relief measures. Hong Kong’s government will release the August retail data later on Wednesday.

Rents in some areas are dropping. Prada SpA’s landlord on Russell Street in Causeway Bay is offering to slash rent by 44%.

It’s not only tourists who are cutting back. In August, shopping at supermarkets and fuel were the only major sub-indexes in the Hong Kong data that didn’t show a decline. Consumers spent less in areas including at department stores, for clothing, shoes and other accessories, as well as electronics and even Chinese drugs and herbs.