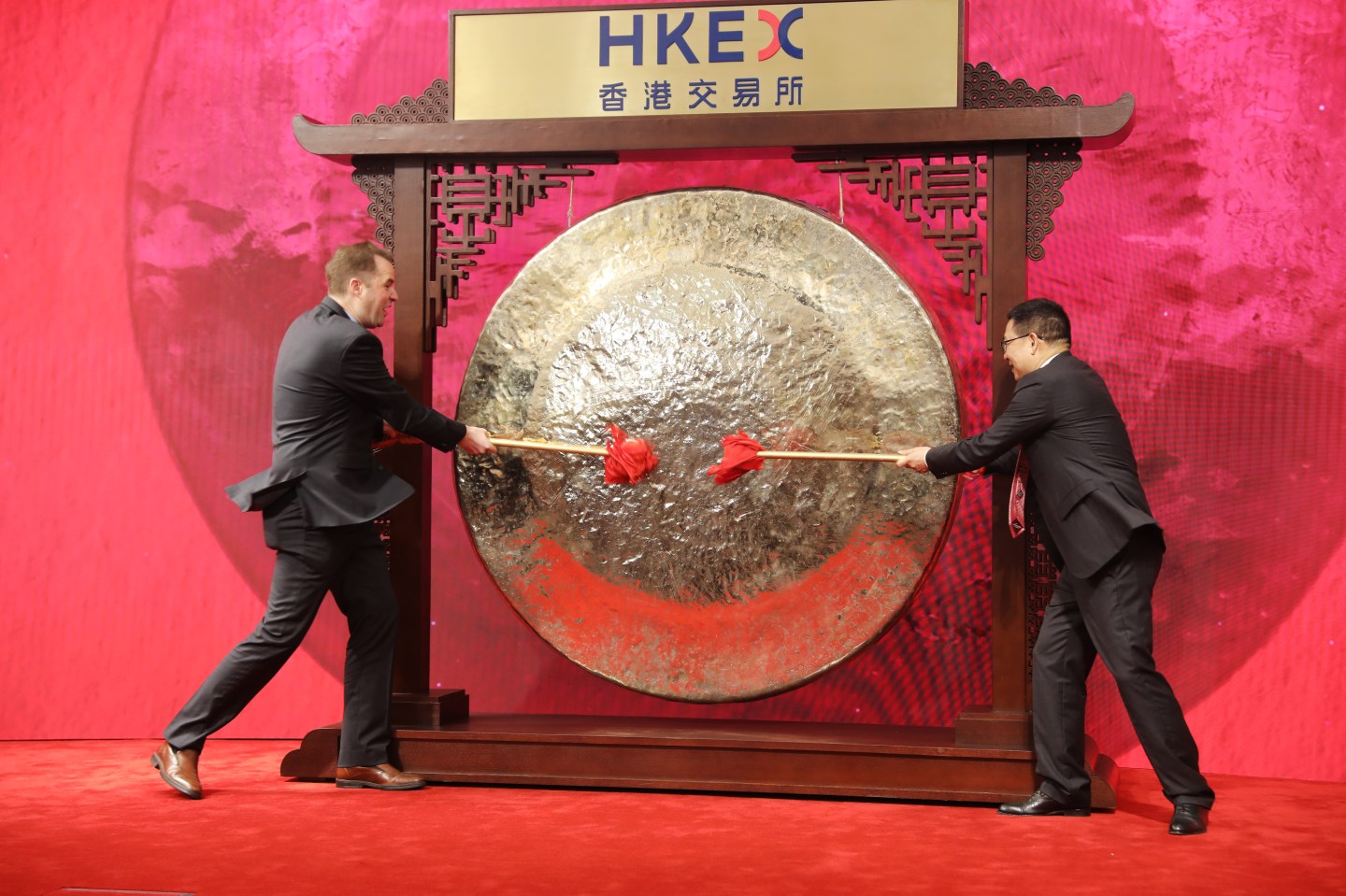 Jan Craps, chief executive officer of Budweiser Brewing Company APAC Ltd., left, and Frank Wang, executive director, general counsel and joint company secretary, strike a gong during the company's listing ceremony at the Hong Kong Stock Exchange in Hong Kong, China, on Monday, Sept. 30, 2019. The Asia-Pacific beer unit of Anheuser-Busch InBev NV gained as much as 4.8% in its Hong Kong trading debut, a positive for the lackluster global market in initial public offerings and vindication for the beermaker in its second attempt at an Asian listing. Photographer: Kyle Lam/Bloomberg via Getty Images
Kyle Lam—Bloomberg via Getty Images

The Asia-Pacific beer unit of Anheuser-Busch InBev NV gained as much as 7% in its Hong Kong trading debut, boosting the lackluster global market in initial public offerings and vindicating the beermaker in its second attempt at an Asian listing.

Budweiser Brewing Company APAC Ltd. raised $5 billion selling shares at the bottom of a price range last week, in the world’s second-biggest IPO this year behind Uber Technologies Inc. That gave the Asian unit an enterprise value of $45 billion, helping the parent company reduce its massive debt load and laying the groundwork for possible future acquisitions.

The shares rose to as high as HK$28.90 in Hong Kong trading Monday, from the offering price of HK$27. The benchmark Hang Seng Index increased 0.6%. Shares of the parent company slipped 0.4% in early Brussels trading, but they’ve risen 50% so far this year.

“We’ve seen very solid demand for our stock when we did the management roadshow,” said Jan Craps, chief executive officer of Budweiser Brewing APAC, in a briefing in Hong Kong on Monday. “We are confident there’s a strong foundation here.”

The result provides an encouraging conclusion to what’s been a rocky IPO path for the Asia arm of the world’s biggest beer company. Budweiser Brewing originally expected to storm into Hong Kong as a $64 billion company, but the deal was shelved in July amid lackluster demand. It was a high-profile setback that spotlighted the growing disconnect between companies’ lofty private valuations and investors’ expectations, with would-be buyers skeptical of even well-known brands.

AB InBev revived the offering after selling its Australian operations to Japan’s Asahi Group Holdings Ltd. for about $11 billion. That roughly halved the size of the Asia-Pacific offering, giving investors a more focused stake in faster-growing parts of the regional business, with brands like Cass in South Korea and Harbin in China.

“It is certainly a more reasonable level than the first time around,” Andrew Sullivan, director at Pearl Bridge Partners Ltd., said of Budweiser’s valuation on Bloomberg Television. “Looking forward, it gives them an opportunity to build more deals in Asia.”

The gains in Budweiser’s trading debut may give some hope to a global IPO scene unsettled this year by volatile markets and geopolitical uncertainties. Multiple companies have halted their scheduled listings in Hong Kong, which is facing twin pressures from anti-government protests that show no sign of abating and a trade war between the U.S. and China.

Budweiser’s launch helps propel Hong Kong past Shanghai as the world’s No. 3 market for IPOs this year. It may also shore up investor sentiment for upcoming IPOs that may include the lucrative secondary listing of Alibaba Group Holding Ltd.

“This IPO is quite different to many others that have faced headwinds recently,” said analyst Euan McLeish at Sanford C. Bernstein. “BUD APAC is widely recognized as a high-quality company.” He added that “strong earnings visibility” will drive continued investor interest.

The share offering helped AB InBev further trim down its $100 billion-plus debt pile after its purchase of SABMiller in 2016, letting it accelerate its goal of creating a regional champion in Asia, especially through acquisitions.

CEO Craps said Monday the company can create a lot of value with regional players in Vietnam, Thailand and Cambodia.

The sale of the Australian unit to Asahi lopped off about one-fifth of the Asia-Pacific unit, cutting its annual sales to about $6.7 billion, according to the latest preliminary prospectus. But the deal increased Budweiser Brewing’s 2018 growth rate by more than a percentage point, to 7.4%, as it removed operations in a more mature market.

The track record for IPOs hasn’t been impressive lately.

Fitness startup Peloton Interactive Inc. on Thursday dropped 11% on its first day of trading. That same day, the Hollywood agency Endeavor Group Holdings Inc. shelved its IPO, citing unfavorable market conditions. WeWork, the office-sharing company, was forced to put off its offering to next year in the face of tepid demand.