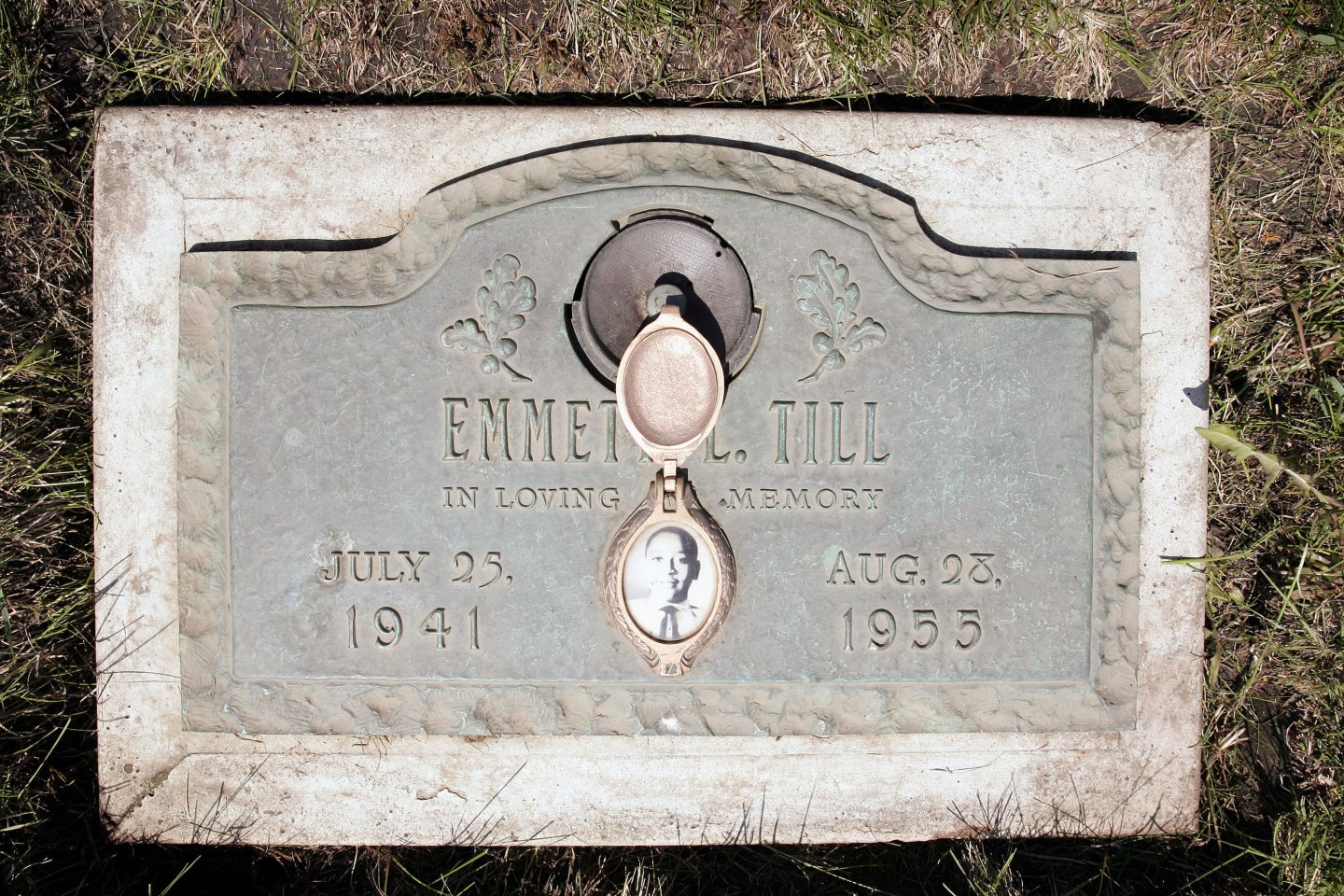 ALSIP, IL - MAY 4: A plaque marks the gravesite of Emmett Till at Burr Oak Cemetery May 4, 2005 in Aslip, Illinois. The FBI is considering exhuming the body of Till, whose unsolved 1955 murder in Money, Mississippi, after whistling at a white woman helped spark the U.S. civil rights movement. (Photo by Scott Olson/Getty Images)
Scott Olson/Getty Images

The government is still investigating the brutal slaying of a black teenager, which helped spur the civil rights movement more than 60 years ago.

The Justice Department has issued a report to Congress about civil rights cold case investigations, which lists the 1955 slaying of 14-year-old Emmett Till as being among the unit’s active cases. Till, who was from Chicago, was abducted and beaten to death hours after he whistled at a white woman while visiting Mississippi. His body was found in a river days later.

The investigation, closed in 2007, was reopened last year, when new information about the case came to light in the book The Blood of Emmett Till.

As Till family waits, six other cases closed

A cousin who was with Till the night he was abducted said he was encouraged the case is still under review but anxious for a resolution.

“We want them to go ahead and do something,” said the Rev. Wheeler Parker, 80. “What is the holdup?”

The department has closed its investigations into six other apparently racially motivated killings dating from 1940 to 1973 because authorities have been unable to make any headway in them, according to the report, which was posted to a Justice Department website with no announcement. In each case, suspects or witnesses died or the law prohibited charges against people who had already been tried and acquitted.

The government’s report is required under a law named for Till, whose slaying incensed the nation and has been credited with helping build support for civil rights.

Till was abducted from a relatives’ home after whistling at a white woman, Carolyn Bryant Donham, at a country store in Money, Mississippi.

Bryant’s then-husband Roy Bryant and his half brother, J.W. Milam, both white, were charged with murder but acquitted by an all-white jury. The men later confessed to the crime in a magazine interview but weren’t retried. Both have since died.

In the 2017 book The Blood of Emmett Till, author Timothy B. Tyson quoted Donham as saying she wasn’t truthful when she claimed Till grabbed her, whistled, and made sexual advances.

After publication of the book, Tyson said FBI agents called him and he turned over interview recordings and other research materials. Parker, who was with Till at the store and later when he was kidnapped, said he also has spoken with investigators since the case was reopened.

Another cousin of Till, Deborah Watts, said the family hasn’t had any contact with Donham.

“I would have a conversation with her,” Watts said. “The truth needs to be told. I think Carolyn holds the key to that.”

No update or deadline given in Till inquiry

The report doesn’t provide any update on the Till investigation or indicate when it might conclude. The fact that the case is still open means new charges could be brought, but Parker said he doesn’t expect much.

“At least they are touching it, and values have changed,” he said. “At least America has reached the point where they will investigate and you can’t go out and just kill people.”

The report said cold case investigators were ending reviews of the deaths of Elbert Williams in Brownsville, Tennessee, in 1940; Dan Carter Sanders in Johnston Township, North Carolina, in 1946; Peter Francis in Perry, Maine, in 1965; Lee Culbreath in Portland, Arkansas, in 1965; John Thomas Jr. in West Point, Mississippi, in 1970; and Milton Lee Scott in 1973 in Baton Rouge, Louisiana, in 1973. All the victims were black except Culbreath, who was a member of the Passamaquoddy Indian tribe.

The report said federal agents fatally shot Scott during an attempted arrest and there was no new evidence to support bringing charges.