Testing the Luxury Shoe Market With a Salon on Wheels 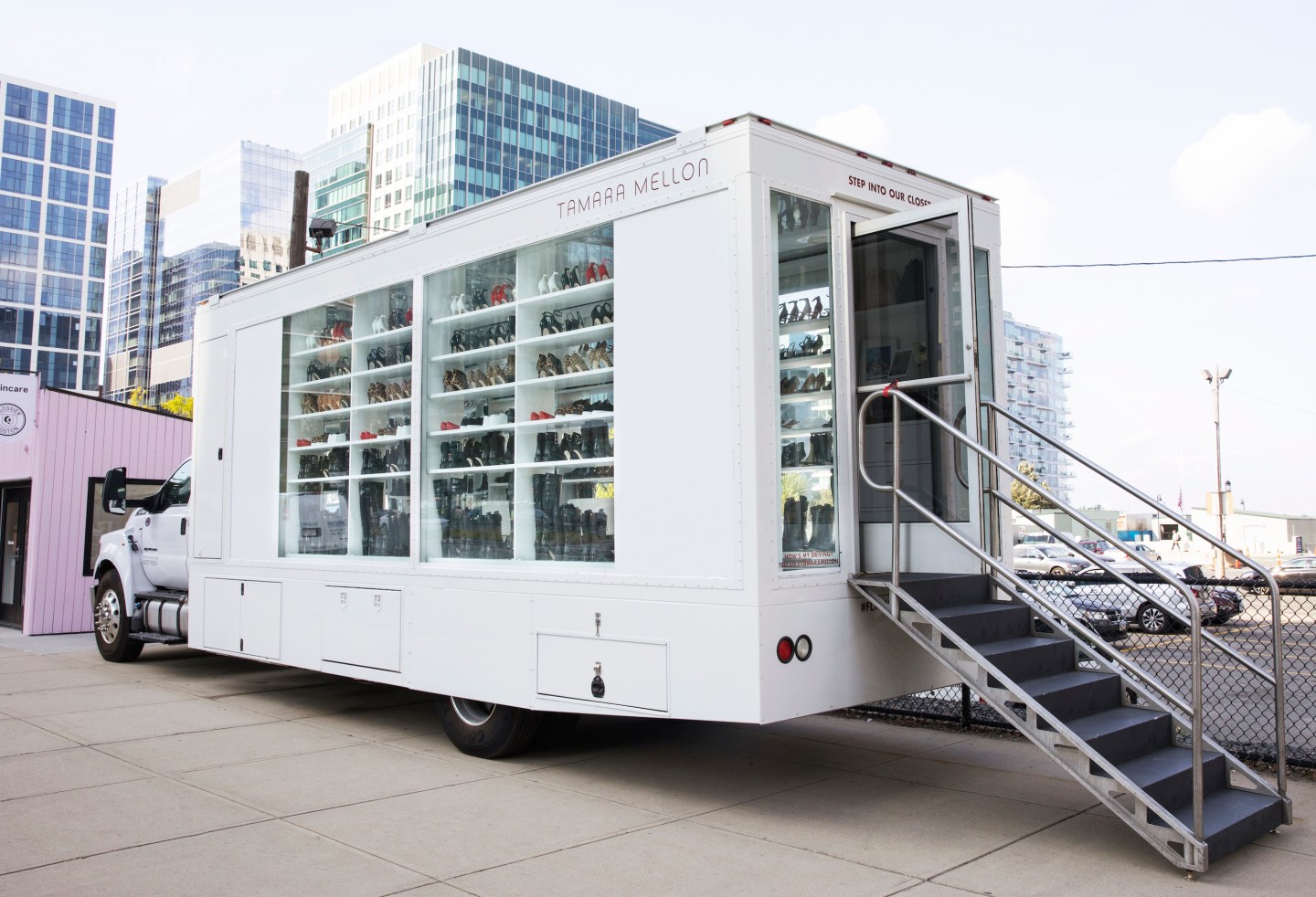 Tamara Mellon, co-founder of Jimmy Choo who is fast growing her namesake venture, is taking a mobile store—a large, glass-sided truck shoe salon—to roughly a dozen cities across the U.S. so customers can touch and try-on her Tamara Mellon shoes.

The rolling tour started Sept 12 with a four-day stop in Boston’s Seaport neighborhood, and will be in New York City from Sept 26 to Sept. 29. The nationwide swing wraps up in the San Francisco Bay Area in mid-December.

Victoria Thomson, Tamara Mellon’s chief marketing officer, said the Boston pop-up’s sales had been “above expectations” and “three-fold what we do in [our] store,” referring to the brand’s only store, in Pacific Palisades, a Los Angeles suburb.

The company recently raised $50 million in series C funding, and will use some of that capital to open five stores by end of 2021. They are targeting New York and San Francisco first, a company spokeswoman said, though no deals have been signed yet.

For its truck salon, visited in Boston by Fortune, the digital native brand chose core styles—such as the Easy Rider ($750), the Reverse Frontline sandal ($395), and the Charge leopard bootie ( $795)—and stocked a try-on pair in each size. Customers’ orders are shipped free.

While the Tamara Mellon truck in Boston benefitted from neighboring pop-up traffic, it also attracted their own loyalists, many of whom had not seen the shoes in person.

Likewise, the movable shoe store is increasing customer awareness of the brand and familiarity with its fit and sizing, a hurdle for shoe brands selling online. “We do expect to see a halo effect on website visits and sales from the truck,” Thomson said.

Pop-up stores like Mellon’s are thriving in Boston’s Seaport, a booming area of new retail, office, parks, and luxury condos that sits along a redeveloped section of waterfront. The neighborhood, formerly warehouses and parking lots, is now populated with parks, cafes, and the Institute of Contemporary Art. While digital native brands Away, Warby Parker, Outdoor Voices, and others have opened permanently in the Seaport—the jewelry brand Mejuri is coming soon—pop ups have played a significant component of a lively streetscape.

The Tamara Mellon truck is parked next to digital native make-up brand Glossier, which fills The Current, a cluster of shipping containers rented for an ongoing cast of temporary pop-up stores. This is the first time one brand has taken the whole setup and transformed it.

Tamara Mellon’s truck salon only has shoes to try on. Customers have their orders shipped.
Courtesy Tamara Mellon

The Current is now painted entirely Millennial pink, a hue favored by the Instagram generation, and staffed with dozens of associates in boiler suits the same strawberry ice-cream shade. A Glossier associate said on its first day the brand shattered past sales records for the entire location. Similar to how Starbucks fills orders, Glossier customers linger to hear their names called out—via megaphone—then collect their purchases from a pick-up window. Nearby, Cisco Breweries, a popular Nantucket hangout, popped up a live-music beer garden selling Cisco-branded hats and t-shirts.

Pop ups, which started in 2009 amid the Great Recession as a way to fill mall vacancies, have become a powerful part of retail. They allow brands to showcase their creativity and try new locations with no strings attached. A pop up diner promoting Eminem’s album Revival sold Mom’s Spaghetti, a reference to his hit Lose Yourself. A pop up by Arianna Huffington peddled sleep merchandise.

“The urgency surrounding a pop-up store is also about the experience of being there and documenting the atmosphere on social media rather than just purchasing,” Marci said. “A pop-up site can win over consumers with an experience and an environment that is then converted into sales after the temporary site has vanished.”

In research conducted on a large-scale pop up hosted by Alibaba, professor Dennis Zhang of Washington University in St. Louis found that customers spent 40% more money on associated web sites after visiting the pop up.

The halo from a successful pop up can persist for a long time.

“We’re seeing products purchased from pop-up sites being resold for a significantly higher price than originally sold, ” Marci said. “For instance, even years after the first Supreme x Louis Vuitton pop up, the buzz surrounding the much-covetable pieces remains. For instance, the Supreme x Louis Vuitton Danube Satchel petite model originally sold for $2,410 when first dropped in 2017, is now available on Vestiaire Collective for $11,430—a price increase of 374%.”