Fitbit Versa 2 Review: With Alexa and an Always-on Display, Fitness Tracking Gets Smarter 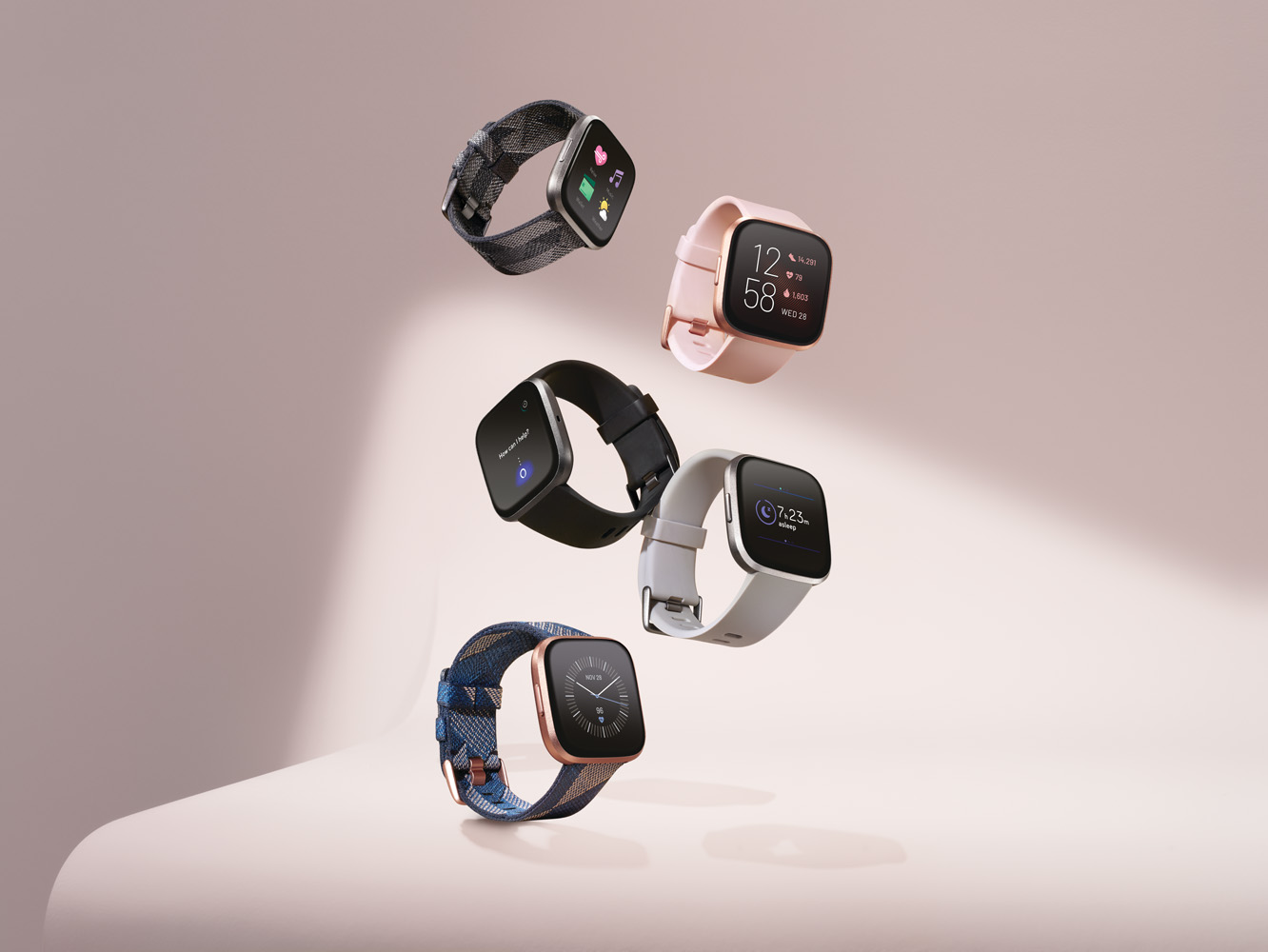 Fitbit, the first popular wearable, was once the undisputed king of fitness trackers. But in the smartwatch era, it has lost its crown. Now with the $200 Versa 2 smartwatch, the company is out with its fourth attempt at a wearable computer, and it has a winning design on its hands.

But it’s not the watch for everyone—especially since Apple decided this week to start selling its two-year-old (but still capable) Series 3 smartwatch also for $200.

Here are some of the highlights—and glitches—I encountered wearing a Versa 2 supplied by Fitbit for a week:

An always-on screen that’s a little off

The Versa 2’s main improvement over earlier Fitbit smartwatches is its upgraded touch screen. The squarish AMOLED display is not only brighter and crisper than the LCD screen on last year’s original Versa, but it also gives the watch an always-on display. To match that feat with an Apple Watch, you’ll have to spend an extra $200 for the Series 5, announced on Tuesday.

Critics of smartwatches sometimes complain that the devices fail at the most basic task of being a watch, telling time, because their displays power down. With the original Versa, like most of its rivals, you had to raise your wrist to turn on the screen. This doesn’t work 100% of the time, leaving you sometimes staring at a blank watch face.

Fitbit’s always-on feature on the Versa 2 eliminates that complaint. The always on screen offers a pared down digital or analog time display with icons showing a few other key bits of info, like battery life and the date. When it’s inactive, the display is black and white to save battery life (relatively speaking), but it’s easy to read at any angle.

You can also set the always-on display to appear during workouts, showing a black and white version of your stats, like speed and distance while biking.

Unfortunately, the always-on screen disables the touch ability of the screen. You can’t swipe to pull down other controls or trigger apps on the always-on screen like you can with the normal display. To reactivate the regular, full-color, interactive display, you have to make a series of rapid taps on the screen or press the side button.

And while Fitbit focused on making the always-on feature energy efficient, there is a cost in battery life. Fitbit says that with typical usage (not using the always-on mode) Versa 2 normally offers an impressive five days battery life before needing to be recharged. In my testing, I found that I could easily get more than three days, even when recording long, daily cycling sessions and frequently using the watch to try all the new features. But turning on the always-on mode all the time drops the smartwatch’s battery life to just two or more days, according to Fitbit. I found myself needing to recharge it by the end of my second day.

Alexa, what can you do on a Fitbit?

One area where Fitbit’s smartwatches have previously trailed far behind rivals like Apple, Samsung, and LG is with voice-controlled digital assistant features. The Versa 2 is Fitbit’s first with a built-in microphone, so it can finally catch up. The watch includes Amazon’s Alexa voice-enabled assistant technology, and it’s terrific. Hold down the Versa’s single button and Alexa pops up, ready to do all the sorts of things it does on smart speakers and other devices. Ask it for the weather, sports scores, or a currency conversion, and the Versa 2 displays Alexa’s answers on its screen. But Alexa doesn’t talk back, though—unlike rivals, the Versa 2 still doesn’t have a speaker.

You can also use the Alexa feature to control smart home devices that are compatible with Amazon’s ecosystem, set alarms and timers, and perform many more functions. It’s a huge, huge improvement over previous Fitbit devices, particularly since Alexa’s functionality fills in gaps left by the company’s smaller offering of third party apps relative to Apple and Google.

In addition, Versa 2 owners can reply to texts and other kinds of messages right on the watch by dictating a response that’s translated to text (very accurately in my experience) with the underlying Alexa app. That trick only works for users with Android phones—not iPhones—because of restrictions imposed by Apple on third-party developers.

I do have one minor gripe with Fitbit’s Alexa implementation, which flows from the decision to pare down the device to just a single button from three buttons on the original Versa smartwatch. With the Versa 2, you can assign a long press on its button either to trigger Alexa or to bring up Fitbit’s wireless payment service. But the feature that doesn’t get the long-button press treatment can only be triggered by a swipe-and-tap gesture that’s much less convenient. (And it doesn’t work with the always-on mode.)

As the pioneer in fitness tracking, Fitbit has had the most time to hone its health and fitness features—and with the Versa 2, it shows. For example, the smartwatch offers a smart sleep-tracking feature that automatically calculates how long you’ve slept and offers several measures of the quality of that rest. While you exercise, the Versa 2’s “PurePulse” heart rate sensor calculates how much time you’re spending in different heart rate zones in realtime, a boon to those who stay in shape using a cardio training program.

It also has the female cycle tracking app that Fitbit has included since the original Versa, a feature Apple will add to its phones and watches this fall. And it’s also great at automatically detecting workouts. When I jumped in my getting end-of-summer chilly pool, the Versa 2 asked if I wanted to record a swim. But like the original Versa smartwatch, this new Fitbit lacks GPS sensors, so it’s not so great for running or cycling without carrying your phone.

Who should buy the Versa 2?

Fitbit’s original Versa was a hit with its slim design that appealed to men and women, and a $200 price that undercut much of the competition. But times have changed. Not only is Apple now selling its Series 3 watch for $200, but Garmin has also introduced a low-end watch, the Forerunner 45, at the same price. And both rivals have built-in GPS, which the Versa 2 lacks.

So if it’s not the automatic pick for budget smartwatch buyers any more, who should consider the Versa 2? For people already entrenched in Fitbit’s data ecosystem, the Versa 2 is the best device for counting steps, rating their sleep, and competing with friends who also use the company’s other trackers and watches. Its sleep tracking app and five-day battery life are unmatched by most other devices, including the Apple Watch (though Apple’s new Series 5 has what looks like a much better always-on display). And it’s a lot more capable—and fun—than any of Fitbit’s more basic trackers, even the $150 Charge 3. Pre-orders are open now on Fitbit’s web site, with deliveries scheduled to begin on Sept. 15.

But for everyone else, buying a Versa 2 is a much harder call. If fashion is a prime concern, the better looking and more expensive round screen offerings from the likes of Fossil and Tag Heuer that run Google’s watch software are appealing. If apps and features beyond fitness are more important, Apple’s wider offering of wrist-based apps wins out. (Fitbit still has just two airline watch apps and a single major news provider with its own app, for example.) And Garmin has recently been pouring it on, with four new watches introduced just last week, joining a half dozen released in the spring.

Put simply, for smartwatch buyers there’s never been more choices, and the Versa 2, while a solid option, has more competition than ever.

(Update: This story was updated on Sept. 13 to clarify that a series of taps can also switch the always-on display to the regular display.)