Rise of the Super Sequel! As ‘It: Chapter Two’ Hits Theaters, Why Are Blockbusters Getting So Long? 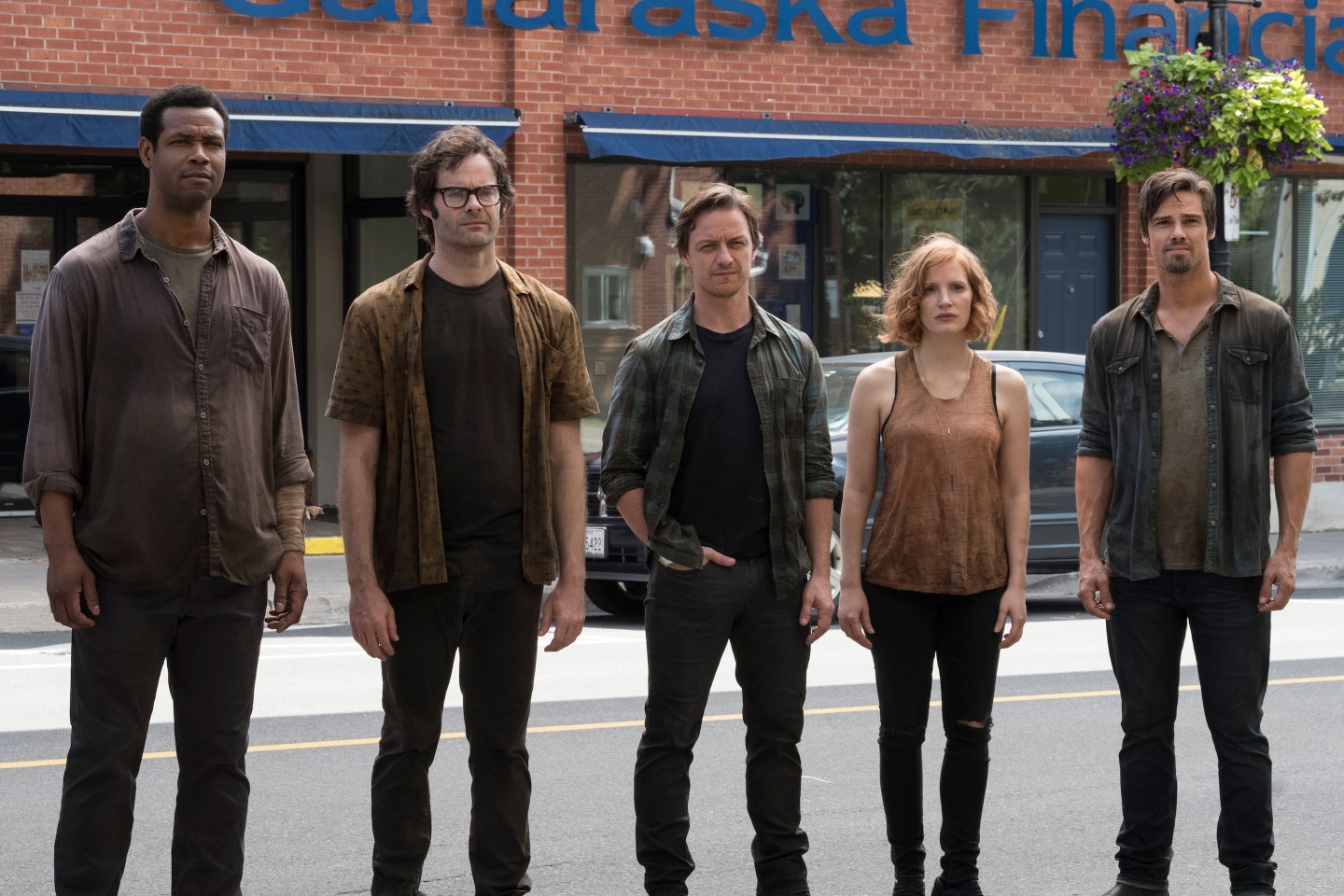 It: Chapter Two floats into theaters this weekend, concluding the skin-crawling saga of seven childhood friends doing battle with a demonic entity in their Maine hometown. But for some viewers, the scariest thing won’t have much to do with Pennywise the Clown.

In a year of super-sized sequels, Andy Muschietti’s follow-up to 2017’s It runs 169 minutes. (Amusingly, the film’s director’s cut, Muschietti told this reporter during a recent interview, was even longer at 205 minutes, before the studio got involved.) That’s a marathon, especially for a film as commercially tipped as this Warner Bros. spooker.

Following the highest-grossing horror movie of all time (unadjusted for inflation), Chapter Two is on track for a $100 million opening. If it hits that mark—or surpasses it, as some analysts predict—it could pull in more than its predecessor’s total $700 million haul and become one of the fall’s biggest blockbusters—as well as the horror genre’s biggest-ever money-maker.

But to do so, it will have to keep audiences enthralled for longer than the vast majority of both horror films and studio blockbusters. “The length really shows how much gravitas It has,” said Paul Degarabedian, Comscore box-office analyst. “Horror is usually lean and mean.” Instead, the film’s built like a prestige drama.

The first It was a comparatively limber 135 minutes; this finale runs a full half hour longer, and is also longer than famously lengthy horror classics like The Shining (circa 146 minutes) and The Exorcist (133 minutes), as well as recent “prestige” horror titles like the Suspiria remake (153 minutes). It’s also just 23 minutes shorter than the original 192-minute total runtime of ABC’s ’90s It miniseries—despite only telling half the story.

But Chapter Two arrives amid a particularly notable year for blockbuster filmmaking, in which longer runtimes are increasingly not only du jour but equated with a level of “event” moviemaking.

Sprawling length has long been conflated with substance when it comes to awards-bait films—name one historical-epic “prestige pic” that clocks in at a tight 90 minutes—and that same equation appears to be guiding the architects of today’s more commercially minded popcorn pleasures.

2019: A Year of Supersized Sequels

Avengers: Endgame, Disney’s no-holds-barred capstone to the Marvel Cinematic Universe, is the most prominent example of this. With its 182-minute runtime, the wildly anticipated conclusion to an 11-year endeavor tested audiences, and they responded with complete adoration. Endgame now stands as the highest-grossing movie of all time, with a nearly $2.8 billion global take.

Possibly the ultimate example of a franchise boasting a built-in audience, Endgame didn’t hurt for being 33 minutes longer than Infinity War, and the longest MCU entry by far.

“The two-hour film has had a great run over 100 years,” Endgame director Anthony Russo told Deadline. “But it’s become very difficult to work in… I’m not sure that the generation that’s coming up will see the two-hour film as the dominant form of storytelling.”

Bearing out Russo’s theory, the year’s most anticipated sequels appear to be getting longer almost across the board—to the point where it’s almost unheard of for a major sequel or reboot to clock in under two hours. “We’re in the middle of an arms’ race in terms of the running times of movies,” says Degarabedian. “Now, it’s at the point where, if your movie is under two hours, it’s shocking.”

Out of the highest-grossing movies of this year, only three managed that feat, but all were animated. The Lion King, at 118 minutes, shouldn’t be considered lean given that it’s a full half hour longer than the 88-minute original. Toy Story 4, 100 minutes long, is the lengthiest of its franchise; ditto for How to Train Your Dragon: The Hidden World, even at a svelte 104 minutes.

Look at Hobbs & Shaw—then continue looking at it, for 135 testosterone-soaking, engine-revving minutes. The sidequel to Universal’s Fast & Furious series is among its most supersized entries, despite featuring only two members of the ensemble cast. The four films preceding it average 133 minutes, with the lengthiest drifting to 137 minutes. All are a far cry from the average 106-minute runtimes F&F‘s first four entries raced in with. That series’ transitional point came in 2011, as Fast Five opted for international intrigue (and Dwayne Johnson) over inner-city crime and street racing.

John Wick: Chapter 3 – Parabellum runs 131 minutes. Its franchise started as the simple tale of one man on a mission to kill some dudes who killed his dog. It has since broadened into a mythic saga of assassins at war, replete with balletic action choreography. The third entry, Parabellum is an Infinity War-style “part one,” as evidenced by the subtitle, but runs a full half-hour longer than the first movie (and nine minutes longer than the second).

Angel Has Fallen, a third installment of Gerard Butler playing out All-American murder fantasies, is over two hours long, unlike its predecessors. And Men in Black International, though missing Will Smith and Tommy Lee Jones, found another nine minutes to tack on top of the franchise’s previous record, 106 minutes.

This year’s Godzilla: King of the Monsters—despite a markedly lighter tone than 2014’s stately Godzilla—packs on, at 132 minutes, an added nine minutes. (Admittedly, both are tighter than the impossibly 139-minute-long Godzilla movie from ’98, which carried the all-telling tagline “Size does matter.”)

Shaft, 112 minutes long, outlasts both Richard Roundtree’s original (100 minutes) and Samuel L. Jackson’s quasi-reboot/sequel (99 minutes). When the original’s take is adjusted for inflation, this year’s reboot also made the least of all three.

Even horror, historically the meanest and leanest of genres (unless your name is Pennywise), hasn’t been immune, though its gains are relative to its genre. The Child’s Play reboot is still a tight 90 minutes; ditto for 47 Meters Down: Uncaged at 89 minutes, and Happy Death Day 2 U, clocking in at 100 minutes.

In terms of sequels, only a few from this year shrunk compared to their predecessors. Annabelle Comes Home, a 106-minute funhouse attraction, knocked four minutes off the 110-minute Annabelle: Creation (though both exceed the 99-minute runtime attached to Annabelle). And Dark Phoenix, the worst-reviewed X-Men movie in Fox’s “first class” era, clocked in at 114 minutes, 22 minutes below the average length of the previous three films (First Class, Days of Future Past, and Apocalypse) combined.

What Allows for Longer Sequels?

Studios, especially when it comes to sequels, have never been under less pressure to keep movies short. With almost double the amount of movie-theater screens in the United States as around 30 years ago, there’s no dearth of screens to play on, and the changeover from film reels to DCPs makes it easier and cheaper to get copies of movies to where they’re being shown. Decades ago, when film reigned supreme and single-screen theaters were more prominent, a massive runtime could limit the amount of times a movie could be shown a day, hurting a studio’s ultimate bottom line.

Of course, in today’s movie landscape, studios like Disney and Warner Bros. also have deep-enough pockets to add more showtimes at a given location and even bring movies back to theaters, as Disney did with Endgame, to bump up the box office. As a result, longer runtimes hurting a film’s final gross is no longer as much of a consideration.

Though sequels are getting longer, franchise filmmaking isn’t the only arena in which Hollywood is seeing runtimes rapidly expand. Coinciding with the rise of the super sequel, mega-sized auteur-driven cinema is also making a comeback, with Hollywood betting big on talents considered either groundbreaking or seminal to keep audiences invested.

Once Upon a Time in Hollywood, Quentin Tarantino’s lurid love letter to 1969 Los Angeles, was one of the few original movies to make a significant splash in the competitive summer box-office season, running a gargantuan 161 minutes. The director is even reportedly considered recutting it into a TV miniseries. It’s not without precedent; Tarantino did the same for The Hateful Eight, retooling the 2015 revisionist Western into a four-episode miniseries for Netflix.

Midsommar, Ari Aster’s new pagan-folk nightmare, went into the summer season as perhaps the most anticipated indie release of the year, owing to the breakthrough success of his 2018 blood-curdler Hereditary. The film stretched out to 147 minutes and a 171-minute director’s cut was released later in the year.

The most audacious “director’s movie,” however, is still to come; Martin Scorsese’s The Irishman, a sweeping crime epic the legendary filmmaker directed for Netflix, clocks in, as of this article’s publication, at 210 minutes, taking long runtimes to the next level and renewing calls by some for the intermission to come back to Hollywood.

Still, the influx of scaled-up sequels in particular begs the question of which movies really warrant protracted runtimes. Added Degarabedian: “For a Marvel movie to be three hours long, for Hobbs & Shaw to be rather long for its genre, it’s a reflection of studios wanting to pack as much as they can into every movie.”

This can run the risk of bloating a story. “If it’s not good,” says Degarabedian. “It’s more of something that’s not good—and that’s not good. If a movie gets too self-indulgent, a line has to be drawn somewhere.”

But such an approach likely owes something to the disrupting influence streaming platforms have had, both on Hollywood business models and entertainment formats themselves. Netflix, Hulu, and Amazon Prime are among the streaming giants pioneering new models of short- and longform TV storytelling, complete with highly malleable season lengths and shifting individual episode runtimes. Subscribers are learning to embrace these hitherto-unseen models of entertainment from the comfort of their homes, consuming hours of content in one to two sittings.

And Hollywood, seeking to program similarly momentous forms of entertainment, is expanding, in terms of both literal runtime and the scale of stories its franchises aim to tell. Seeking to get audiences out to theaters, playing up the visual effects and aesthetic scale of a blockbuster has been one tried-and-true approach; increasingly, the promise of a mightily substantive, meat-and-potatoes sequel is being made as well.

“It flies in the face of the idea bean-counters run studios when you get these super-long movies,” notes Degarabedian, who says padded-out runtimes should be seen as an overture toward telling bigger, hopefully better stories.

—Woody Allen casts himself as a champion of #MeToo again
—How did Grace and Frankie become Netflix’s longest-running show?
—Can a couple of creepy clown movies scare up big numbers at the box office?
—Here’s when your favorite shows return to TV this fall
—The summer 2019 box office was pretty topsy-turvy
Follow Fortune on Flipboard to stay up-to-date on the latest news and analysis.