We Can Fix the Racial Wealth Gap by Reforming Hiring Practices 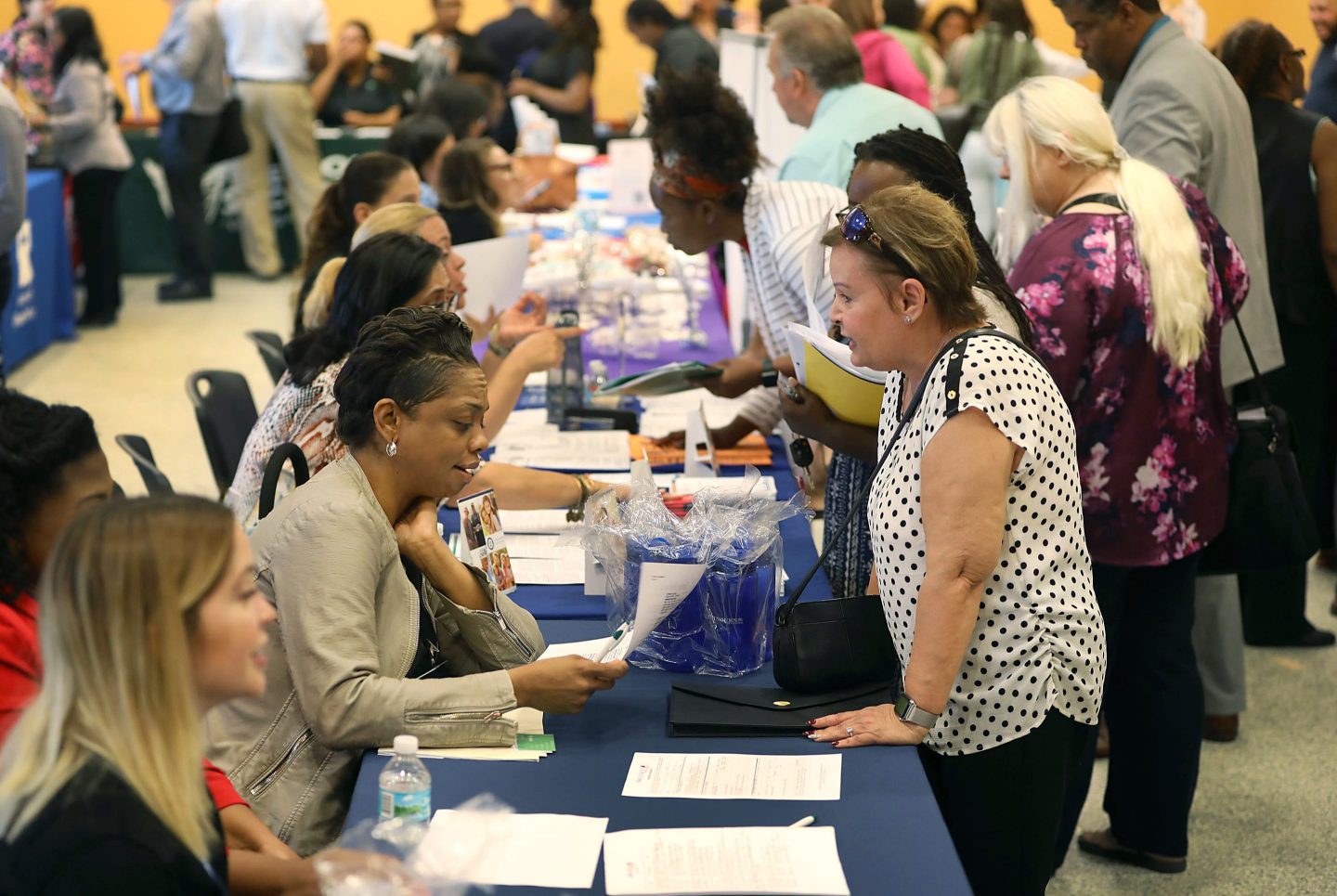 MIAMI, FLORIDA - APRIL 05: People attend a job fair put on by Miami-Dade County and other sponsors on April 05, 2019 in Miami, Florida. The job fair was being held as the Labor Department released its monthly hiring and unemployment figures for March which showed that 196,000 jobs were added last month, a rebound from the February report. (Photo by Joe Raedle/Getty Images)
Joe Raedle—Getty Images

September is National Workforce Development Month, a month designated by Congress to highlight the importance of giving workers better access to education and training. It’s also an opportunity to directly address the employment, income, and wealth disparities that preclude far too many people of color from economic security.

The gaps are serious: In 2017, middle-income white households had eight times as much wealth ($86,100) as middle-income black households ($11,000), and 10 times as much wealth as middle-income Latinx households ($8,600). At the low-wage end of the labor market, wages that haven’t kept pace with inflation disproportionately impact workers of color. As recently as 2015, a full 75% of white workers earned at least $15 per hour, compared to 60% of black workers, 59% of Native American workers, and 51% of Latinx workers.

Public policy decisions have played a key role in forming these inequities, and therefore, must be an integral part of the solution. And one place to start is on the hiring practices that result in racially inequitable outcomes for people of color. These include automatically excluding applicants based on their criminal history, performing credit score checks, and imposing unnecessary degree requirements.

Because most employers choose not to hire formerly incarcerated workers, mandating criminal background checks has a disproportionately negative impact on hiring prospects for black and Latinx workers, given decades of ill-advised policies—like mandatory minimums—that have resulted in higher incarceration rates among these groups.

A persistent racial wealth gap also leaves low-income black and Latinx families with even fewer resources to cover financial challenges, which has a ripple effect on the credit scores of those groups. Using credit checks in the hiring process often prevents financially insecure workers of color from opportunity based on the lingering effects of racist systems.

And while a specific degree may be important for success with a particular employer, explicitly requiring any degree instead of focusing on the skills required for that position further exacerbates racial disparities in employment—given the lower educational attainment levels among people of color due to financial constraints, or the result of K-12 educational tracking, which separates students into different groups, classrooms, or learning pathways by perceived ability level.

There are ways to make hiring practices fairer. Sector partnerships—regional collaboratives between local employers, workforce and education systems, human services providers, and other community stakeholders—can implement practices that advance, and not hinder, racial equity. For example, a 2018 survey by the Ray Marshall Center and the University of Texas found that some members of the 13 sector partnerships surveyed counseled employers against automatically excluding potential employees using criminal background checks and credit checks. And sector partnerships can also attract members who reflect the racial and ethnic communities that they serve, who can further advise local members on how to make their hiring practices more inclusive.

But increasing opportunities for people of color also relies on building relationships even before building skills. That’s why pre-apprenticeship and pre-employment programs are so important. They’re a modern answer to building trade unions—a major source of apprenticeships—which still had “Caucasian only” clauses in their constitutions through the mid-20th century. Even after nondiscrimination legislation was passed in 1963, participation rates for youth of color in apprenticeships continued to suffer because of lack of program awareness and access.

These days, pre-employment and pre-apprenticeship programs create formal on-ramps for workers to employers looking to hire—a more equitable form of access than requiring workers to rely on personal networks, which are often segregated. They expose workers to different work environments to prepare them for apprenticeships while also addressing barriers to employment, such as childcare and transportation.

Developing fairer workforce policies is more important now than ever. By 2030, people of color will make up more than half of our nation’s workforce, according to a study by the Center for American Progress. And by 2035, the Pew Research Center estimates that immigrants will represent more than one in five working-age adults.

The increase in America’s racial diversity is an opportunity to embrace racial equity as an economic and moral imperative. A study commissioned by the W.K. Kellogg Foundation shows that more than 25% of the growth in U.S. economic productivity between 1960 and 2008 was “associated with reducing occupational barriers” for black people and women. And another study shows that the economy would have been $2.5 trillion larger in 2015 had the racial wealth gap been closed.

Workforce development isn’t the only answer. But it’s a crucial component to addressing the vast employment, income, and wealth inequalities that persist.

—Girls Who Code CEO: Men need to be brave in the service of women
—Delivering on the promise of purpose beyond profits
—Regulate fintechs for what they do, not what they don’t
—Retaining good employees is tougher than ever, but offering paid family leave can help
—Supporting LGBT employees is a patriotic act
Listen to our audio briefing, Fortune 500 Daily