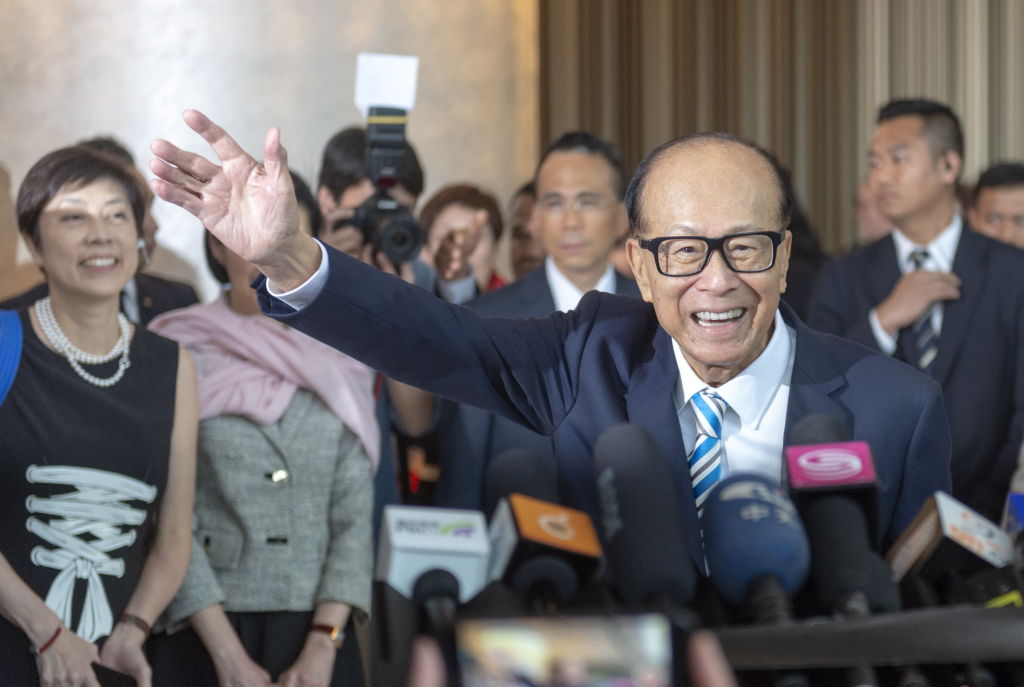 Li Ka-Shing, one of Asia’s richest men, has long been revered for his timing. So what does it say about the future that his flagship real estate fund is pouring windfall gains from Hong Kong real estate into a struggling U.K. pub landlord?

CK Asset Holding, the flagship property company of Li Ka-Shing and his heirs, said this week it had agreed to buy Greene King, a venerable brewer based in Suffolk in southeast England, for 4.6 billion pounds ($5.5 billion).

That came after a month in which political unrest in Hong Kong wiped nearly $3 billion off the market value of Li family’s assets. (No wonder the 91-year-old patriarch took out full-page ads in local newspapers last week calling on both sides for calm.) By coincidence, it was the same month that the British pound had its lowest daily close against the dollar in 34 years, as foreign exchange markets priced in the growing likelihood of a disruptive no-deal Brexit.

However, those trying to sell the tale as a simple story of recycling flight capital are at risk of over-simplifying. Li, worth some $30 billion as of June, started to reduce his risk in Hong Kong over 30 years ago by re-domiciling his principal holding company in Bermuda well before the U.K. handed its colony back to China in 1999. In 2015, when he restructured his business empire, he set up new holding companies in the Cayman Islands, likewise well beyond the reach of the Chinese Communist Party.

The Lis have appeared to move their money westwards more quickly since 2014. That was the year when Hong Kong’s population flocked to the streets to protest reforms to the city’s electoral law, which gave Beijing the right to screen candidates for the Legislative Council. Within a year, the family sold off chunks of its retail and electricity holdings to Singaporean and Qatari sovereign wealth funds, bought U.K. rolling stock company Eversholt Rail, and bid $14 billion for mobile network operator O2, controlled by Spain’s Telefonica, hoping to merge it with its own telecom assets that operate under the ‘3’ brand. EU antitrust regulators blocked that deal, however.

At the same time, the Lis were looking to exit some of their most valuable assets in Hong Kong and China. CK Asset sold the Century Link building in Shanghai for just under $3 billion in 2016, and then The Center in Hong Kong for $5.15 billion in 2017, the biggest ever single-property real estate sale at the time.

Last year, CK redeployed $1.3 billion of that on 5 Broadgate, a piece of prime commercial real estate in the city of London that houses Swiss bank UBS. With the Greene King deal, much of the rest of the windfall has now also found a home.

Unsurprisingly, the Lis play down any suggestion of deserting their homeland. (CK did not return Fortune‘s request for comment.) Presenting CK Asset’s first-half results earlier this month, Victor Li, who now runs the business his father founded, reminded analysts that CK was still the biggest Hong Kong-based investor in the Chinese mainland.

However, he acknowledged that “the Hong Kong property market will continue to be volatile and cyclical.” He stressed that the company wants a steadier, recurrent revenue profile, from which it can pay out dividends more reliably.

But does a British brewer and landlord, on the eve of what could be the biggest external shock to hit the economy in decades, really fit that bill? The country seen its pub count decrease by 11,000 in the last decade, according to the Office for National Statistics. Profits across the industry are under pressure from rising minimum wages and changing consumer habits. Brits are drinking less, and when they do drink, it’s increasingly at home.

“Stable cash flow is not what I’m seeing,” says Nick Burchett, a portfolio manager with Cavendish Asset Management in London, a Greene King shareholder. “If we get a hard Brexit and it starts hitting people’s pockets, the first thing to go is the meal out at the pub for the whole family.”

Whatever one’s views on Brexit, the fact is that CK is paying a pre-Brexit price for a post-Brexit asset. The last time the Greene King stock traded at the offer price of 850 pence was in the week before the U.K. voted to leave the EU in June 2016. Since then, shares have fallen some 40%, as British equities have fallen out of favor with international investors, and the U.K. has gone from being the fastest-growing economy in the G7 to the slowest.

But, as Burchett points out, the deal can still easily add up from CK’s perspective, especially as a real estate play rather than a brewing and hospitality one. He argues that many of the company’s pubs have “little pockets of land” around them that could easily be redeveloped profitably. As long ago as 2016, CK had bought over 136 of the company’s pubs on a sale-and-leaseback basis.

“They obviously like what they see and think there’s a lot of value embedded in the balance sheet,” Burchett told Fortune.

Another way of explaining the premium paid would be that U.K.-focused assets (not least sterling) are simply oversold, even when accounting for Brexit risks. Greene King was trading at a discount to the book value of its real estate when CK made its offer. The same was true of EI Group, another pub operator, when private equity investor Stonegate snapped it up for 3 billion pounds (including debt) a month ago. Tellingly, Marston’s, another brewing-cum-hospitality group, has risen 16% since CK’s move on its rival.

Either way, with the scheduled Brexit deadline barely two months away, Li Ka-Shing won’t have to wait long to see whether he’s still got it when it comes to timing his big bets.

—Vietnamese egg coffee is taking North America by storm–but what is it?
—In Tesla-crazy Norway, the electric vehicle revolution is already here
—Greta Thunberg is shunning transatlantic flights. Should you?
—Some Apple laptops will be banned from flying, FAA says
—Listen to our audio briefing, Fortune 500 Daily
Catch up with Data Sheet, Fortune’s daily digest on the business of tech.