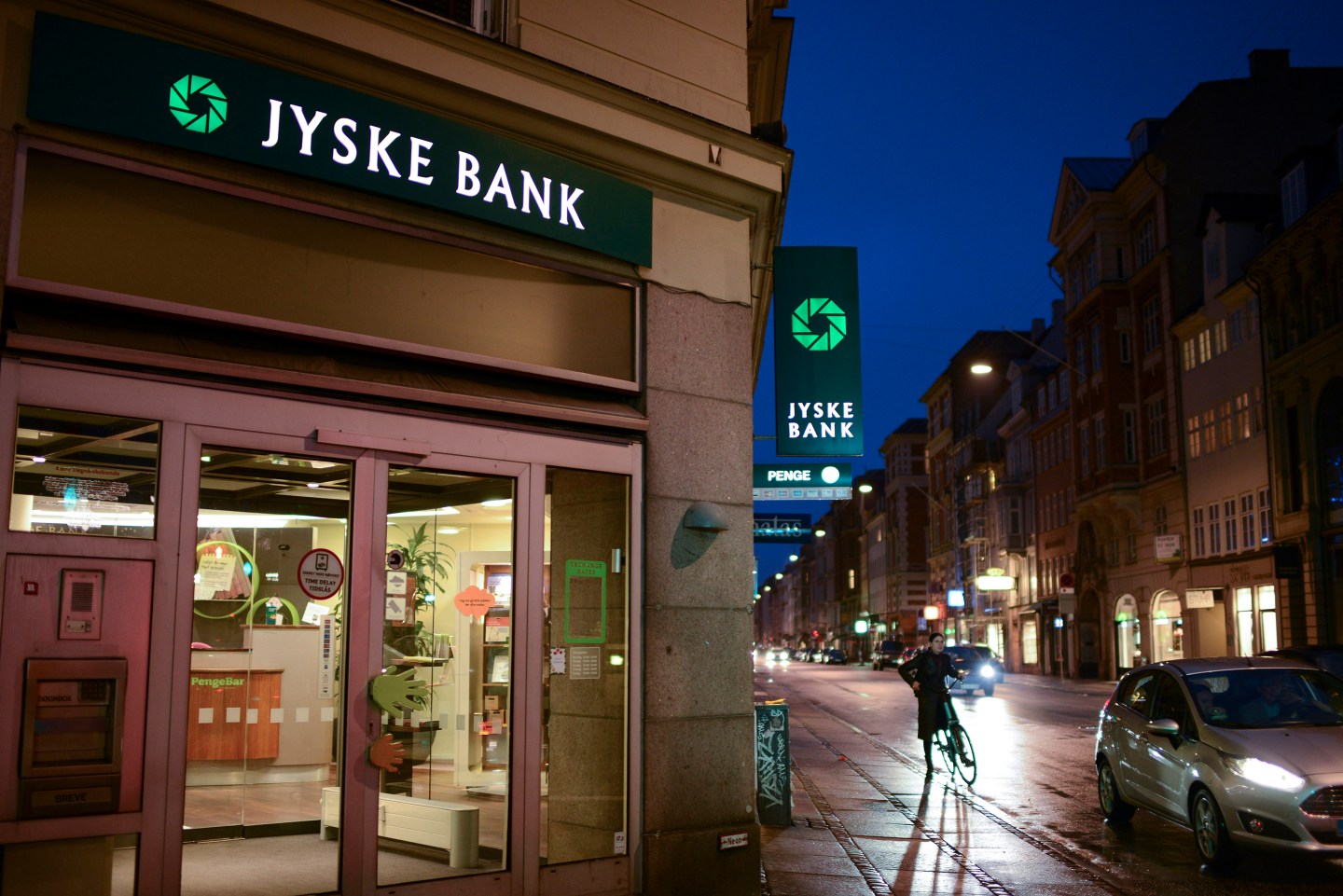 Signs sit illuminated at night outside a Jyske Bank A/S bank branch in Copenhagen, Denmark, on Tuesday, May 21, 2013. Denmark's banks are preparing a campaign that will target the country's lawmakers in an effort to prevent the nation exceeding European regulatory standards. Photographer: Freya Ingrid Morales/Bloomberg via Getty Images
Freya Ingrid Morales—Bloomberg via Getty Images

It sounds like the wind up for a joke: a bank offers negative interest rates mortgages and hopes to make up the losses with volume.

But it’s a reality, at least for Jyske Bank, the third largest market share bank in Denmark. The institution is offering ten-year -0.5% fixed-interest mortgages. You buy the house and get paid as a result.

But don’t get a Danish language learning program and dust off that passport just yet. As crazy as it sounds, the details behind it are eye-opening and speak volumes about where the global economy might be headed.

The notion of a negative mortgage interest rates sounds like a non-starter. “I have not seen or heard of negative rates on a loan and would not anticipate a U.S. financial institution to engage in negative rates,” said Jerry Anderson, vice president of residential lending at Alliant Credit Union. “This is very extreme and most likely restricted to Denmark.”

Indeed it is—for the time being.

Denmark is an EU member but did not adopt the use of the euro, keeping instead its own currency, the krone (plural is kroner), much as the U.K. kept the pound.

“In Denmark, we have fixed exchange rates to the Euro,” said Mikkel Høegh, a mortgage economist at Jyske. The county must “follow [European Central Bank] policy.” In other words, when the ECB changes its interest rates, Denmark must shift its own interest rates to keep the currency exchange rate fixed.

The ECB currently has depository interest rates at -0.4%. Denmark’s benchmark rate is currently -0.65% as a result, creating strategic problems for investors like pension funds that need to park money. Put money into any form of savings and it literally loses value. Keep everything in stocks and other instruments and if markets turn south you might lack the cash to make necessary payments.

While a negative mortgage rate should make it impossible to see a profit, that’s not necessarily the case. That’s because of Denmark’s approach to mortgage-backed bonds and the risk diversification needs of institutional investors there.

The country has a 200-year history of mortgage bonds, according to Høegh. They are significantly different from the collateralized debt obligations, or CDOs, a prominent factor in the Great Recession. CDOs grouped together thousands of subprime mortgages that then fueled bonds, which packaged together together received high ratings from the major credit rating agencies.

The groups of mortgages, however, too often included blocks that has been offered under shady practices. The result was that highly rated bonds could sit on unstable piles of loans that eventually crashed, as ultimately happened.

In Denmark, the bonds are match funded. For every mortgage, there is a single investor—most often an institution like a pension fund—that gets the full financial information on the specific borrower before agreeing to the deal.

Under the current circumstances, the Danish home buyer borrows money from the investor through the bank but doesn’t get the full amount. Someone who gets a $100,000 mortgage only receives $95,000 in cash but is still responsible for paying back $100,000. The investor keeps the $5,000 difference and receives the $100,000 over the ten years.

Why would institutions invest in something that is guaranteed to offer negative returns? Because they are concerned about potentially losing even more money in other ways.

A Danish institution could invest in U.S. Treasury bonds instead of a mortgage. The daily rates have dropped between Aug. 1 and 9. The six month went from $2.04 to $1.95. The ten-year went from $1.90 to $1.74. In the meantime, fluctuations in the exchange rate between Denmark and the U.S. have been high. The rate dropped 4% between mid-July and mid-August. As the dollar gains strength, it takes more kroner to buy a bond.

According to Høegh, institutions in Denmark are worried that the dollar’s strength won’t last. In a slide, the bond’s value falls in local currency and could end up posting a greater loss than the 0.5% that backing a mortgage costs.

It’s an attempt to spread potential risk in risky economy times. And though for now this is only going on in Denmark, it’s a sign of the times—and not a terribly good one.