High-End Hot Pot Heats Up in the U.S. 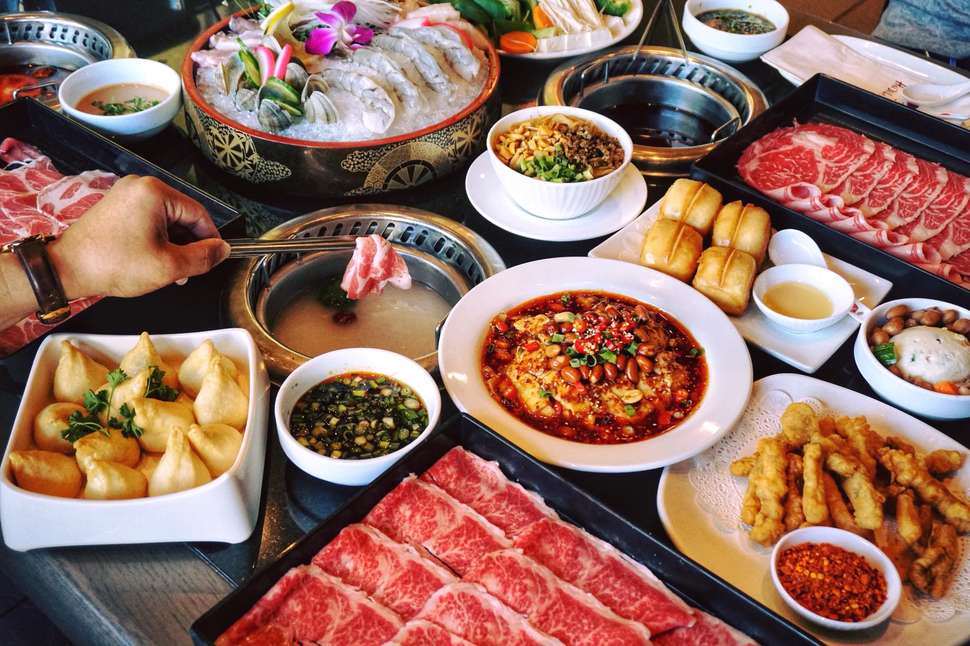 “Hot pot Barbie” comes draped in a dress of Angus steak, rising above a seafood platter like Aphrodite from the waves. The off-menu special at Liuyishou in Vancouver, B.C., is just a taste of the high-end, high-impact hot pot fervor finding a sweet spot with diners in cities across North America.

While the broth-based, cook-at-your-table dish has long been available in restaurants in the United States, a recent class of arrivals specializes solely in making hot pot and making it great. They bring luxury touches like A5 beef, live Japanese spot prawns, and an assortment of top shelf baijiu (a Chinese, grain-based liquor also known as shaojiu) and other spirits.

Sliced meats that can be cooked quickly before being dipped into a custom house sauce.
Haidilao

These Chinese chains started the move to the U.S. slowly, beginning with Hai Di Lao’s arrival in Arcadia, Calif., in 2013. The restaurant has been wowing people in China since 1994, with the mobbed outlets in Beijing known for offering free massages and manicures during the hours-long waits. In the States, it’s mostly known for its noodles made tableside by dancing servers. But Hai Di Lao recently opened its first U.S. store outside California in Flushing, N.Y., where the waiting area has free cell phone screen covers, jewelry cleaning, and hand treatments. The company will soon open two more stores—both in the Seattle area—but in the wait for it to expand outside California, competitors for the luxury hot pot throne have come forth.

Liuyishou, which launched in Chongqing, China, has more than 1,200 locations worldwide and last year opened its first U.S. locations, starting in San Mateo, Calif., and Flushing. This year, Liuyishou expanded to Boston and the Seattle suburb of Bellevue. Though you won’t find hot pot Barbie at all locations, you will find A5 Wagyu beef, handmade shrimp pastes and seafood balls, and giant metal rings filled with raw, impeccably sliced meats that diners can swish through the broth, cooking it quickly, before dipping it into a sauce (often one they custom make at a “sauce bar,” set up buffet-style). The luxury touches come in the form of presentation—seafood ingredients on a boat, meat arranged in eye-pleasing designs—and choice as in the multipage menu.

Hot pot is often set up in a buffet style.
Haidilao

But nowhere else has nailed the art of making hot pot as “extra” as possible quite like Dolar Shop. No, it’s not a misspelling of “dollar”; it’s derived from a Chinese term embodying the people’s willingness to work hard to gather prosperity and fortune, never turning down any opportunities. Originating in Macau in 2004, the chain has more than 50 stores in London, Paris, Tokyo, Dubai, and the like. The Flushing location has been open since 2015 and offers its own “Barbie beef.” Along with a Seattle-area location that opened last year, the company also plans to expand to Boston.

Individual pots of soup tear the meal away from the casualness of sharing, and presentation takes the front seat here: Seafood platters arrive with pomp, afloat in plumes of dry ice. Noodles arrive tucked into custom wooden beds; handmade meatballs look like works of art on pastel plates. Live spot prawns come arranged in a circle, facing upward, as if kneeling to say thank-you for the opportunity, a small bouquet of flowers nestled in the center. To keep the table from getting crowded, tiered racks turn plates of Wagyu beef cubes from clutter into a meat tower. To spare the kind of elegant clothing that one might wear to such a feast from the splatters of dipping, disposable bibs are provided. At the end of the meal, each diner gets a free soft-serve ice cream cone.

While this type of luxury spread is a decade or older in China, until recently it had made only small inroads into heavily Chinese-American enclaves in the U.S. But the current opening spree shows the widespread appeal: Hai Di Lao’s Seattle store will be in the heart of downtown Seattle, with a nearly 8,500-square-foot spot that will seat 300 people. At the time of the company’s IPO last year in Hong Kong, Hai Di Lao was opening a restaurant at a rate of one every three days and was valued at $12 billion.

This means that we are just at the very beginning of the wave of Chinese hot pot chains coming into the U.S. Da Long Yi opened its first U.S. shop in Manhattan’s Chinatown earlier this year—specializing in tallow-frying ingredients before they are dipped. And the South China Morning Post reports that Xiao Long Kan, the third-largest chain in China, plans to open in Flushing next year, followed by planned locations in Los Angeles and Houston. And these are just the major chains: There’s also Zhen Wei Fang, with outlets in Manhattan and Miami, offering Jeju black pork belly, AAA New Zealand lamb, live lobster, and eight different kinds of tofu.

—The new Four Seasons brings a pair of star-chef restaurants to Philadelphia
—Vietnamese egg coffee is taking North America by storm–but what is it?
—Why Charleston’s food scene is stronger than ever right now
—Honolulu’s hottest restaurants take Hawaiian paradise beyond the beach
—Listen to our new audio briefing, Fortune 500 Daily