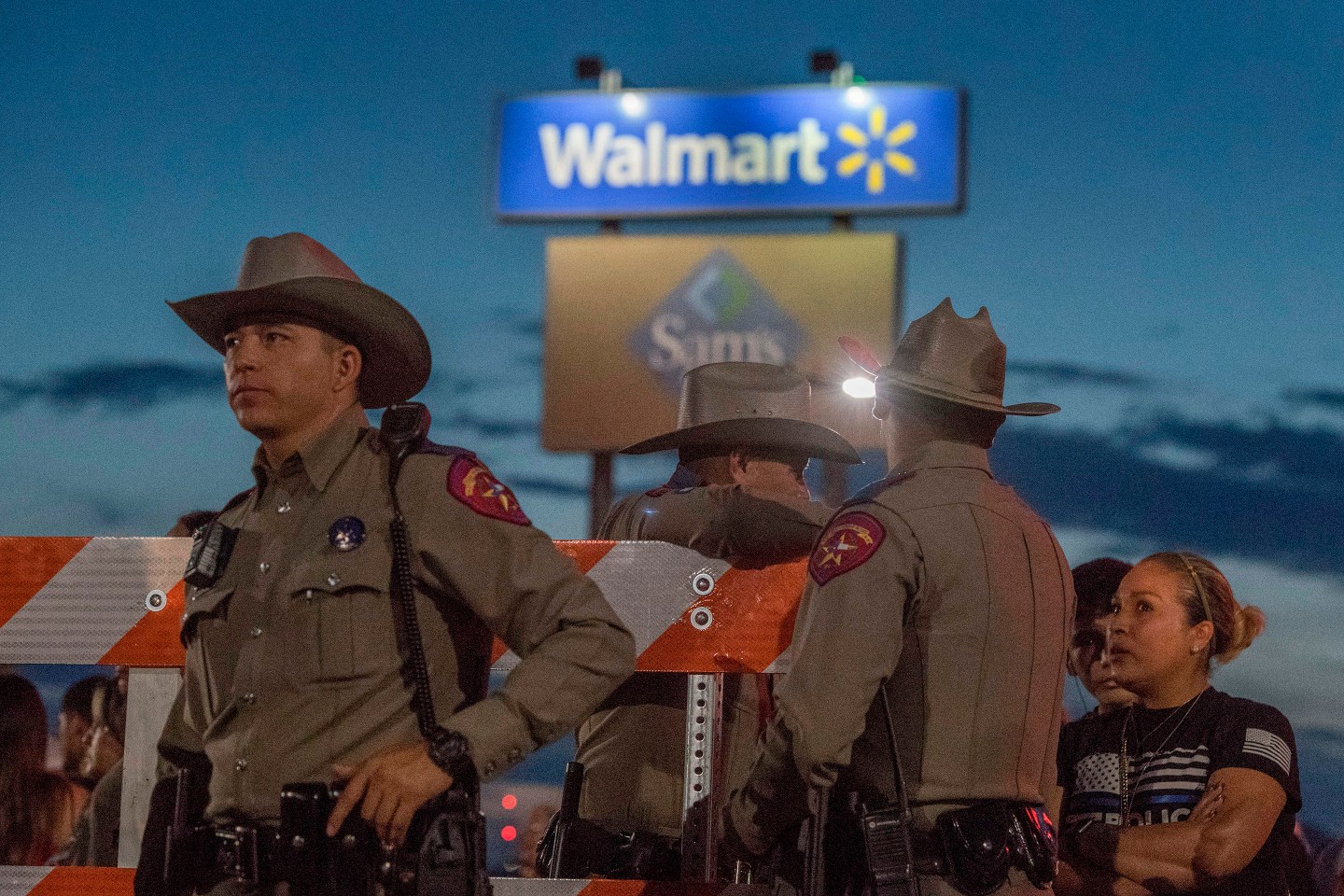 Texas State Troopers keep watch at the makeshift memorial for victims of the shooting that left a total of 22 people dead at the Cielo Vista Mall WalMart in El Paso, Texas, on August 6, 2019. - US President Donald Trump on Monday urged Republicans and Democrats to agree on tighter gun control and suggested legislation could be linked to immigration reform after two shootings left 30 people dead and sparked accusations that his rhetoric was part of the problem. "Republicans and Democrats must come together and get strong background checks, perhaps marrying this legislation with desperately needed immigration reform," Trump tweeted as he prepared to address the nation on two weekend shootings in Texas and Ohio. "We must have something good, if not GREAT, come out of these two tragic events!" Trump wrote. (Photo by Mark RALSTON / AFP) (Photo credit should read MARK RALSTON/AFP/Getty Images)
Mark Ralston—AFP/Getty Images

But mass shootings have become so commonplace that some companies are now including them in the business risk sections of their annual reports. The SEC mandates that all companies detail the factors that might make an investment in the company risky.

In its past two annual reports, Caesars Entertainment noted that “visitation to Las Vegas also declined following the mass shooting tragedy on October 1, 2017.”

And Wynn Resorts included the following paragraph: “Furthermore, the attack in Las Vegas on October 1, 2017 underscores the possibility that large public facilities could become the target of mass shootings or other attacks in the future. The occurrence or the possibility of attacks could cause all or portions of affected properties to be shut down for prolonged periods, resulting in a loss of income; generally reduce travel to affected areas for tourism and business or adversely affect the willingness of customers to stay in or avail themselves of the services of the affected properties; expose us to a risk of monetary claims arising from death, injury or damage to property caused by any such attack; and result in higher costs for security and insurance premiums, all of which could adversely affect our results.” Interestingly MGM Resorts International, the owner of Mandalay where the Las Vegas shooting took place, did not include it in their risk factors, but did include it in their legal proceedings section.

According to the Wall Street Journal, Del Taco Restaurants, Dave & Buster’s Entertainment, and Stratus Properties have all added active-shooter situations to the “risk factors” sections of their annual reports this year.

Del Taco, a California-based restaurant chain said “terrorist attacks or an active shooter could have a material adverse effect on consumer spending,” in its March filing. Dave & Buster’s, a Dallas-based entertainment and dining chain cited acts of violence, “including active shooter situations” could cause customers to avoid their stores, which would adversely affect their business.

The number of fatalities continues to rise from mass shootings, including two incidents over the weekend killing 31 victims. One mass shooting that took 22 lives occurred at a Walmart store in El Paso, Texas. Walmart does not list gun violence, active shooters, or mass shootings in its risk factors section.  It does mention such geo-political circumstances as war and terrorist attacks as many publicly traded companies do.

Like other catastrophes, both natural and man-made, so much of mass gun violence is random. “These things are difficult because you don’t know where it’s going to happen,” says Charles Elson, director of the John L. Weinberg Center for Corporate Governance at the University of Delaware. “It’s societal. It’s something that almost everyone is aware of as a risk factor. It’s beyond the control of the company.”

Every company has risks. And the Securities and Exchange Commission requires publicly traded companies to disclose to investors the significant factors that make an investment in the company’s offerings speculative or risky, according to Laura Richman, a corporate and securities attorney at Chicago law firm Mayer Brown, whose specialties include corporate governance and SEC disclosures. Risk factors aren’t supposed to be generic, according to the SEC rule, but specific to a particular company.

When it comes to mass shootings, there are some companies that may be more susceptible than others because of the industry they’re in, Richman notes. Publicly traded companies that operate stores, restaurants, movie theaters, concert venues, hotels and casinos—places where large numbers of people gather—may decide gun violence poses a noteworthy risk to their investors if an incident occurs and customers no longer feel comfortable going to their venues.

For companies that make or sell guns, there could be concern about publicity from mass shootings damaging corporate reputation or resulting in a legislative response that restricts sales. As the largest general retailer and a gun seller, Walmart falls under both of these scenarios. CEO Doug McMillon is surely grappling with this position. He wrote an Instagram post yesterday saying: “We’ll be thoughtful and deliberate in our responses, and will act in a way that reflects our best values and ideals, focused on the needs of our customers, associates, and communities.”

Despite the irrational and random nature of mass shooting perpetrators, the tragedy over the weekend in El Paso, could motivate Walmart, along with other large merchandisers, to start adding language around mass shootings to their risk factors section in next year’s disclosures. “I think that’s quite possible to the extent that if some companies start doing it, other companies may also choose to do it,” says Richman.