As Markets Dive, Tech Stocks Like Apple and IBM Are Seeing the Biggest Selloffs. Here’s Why 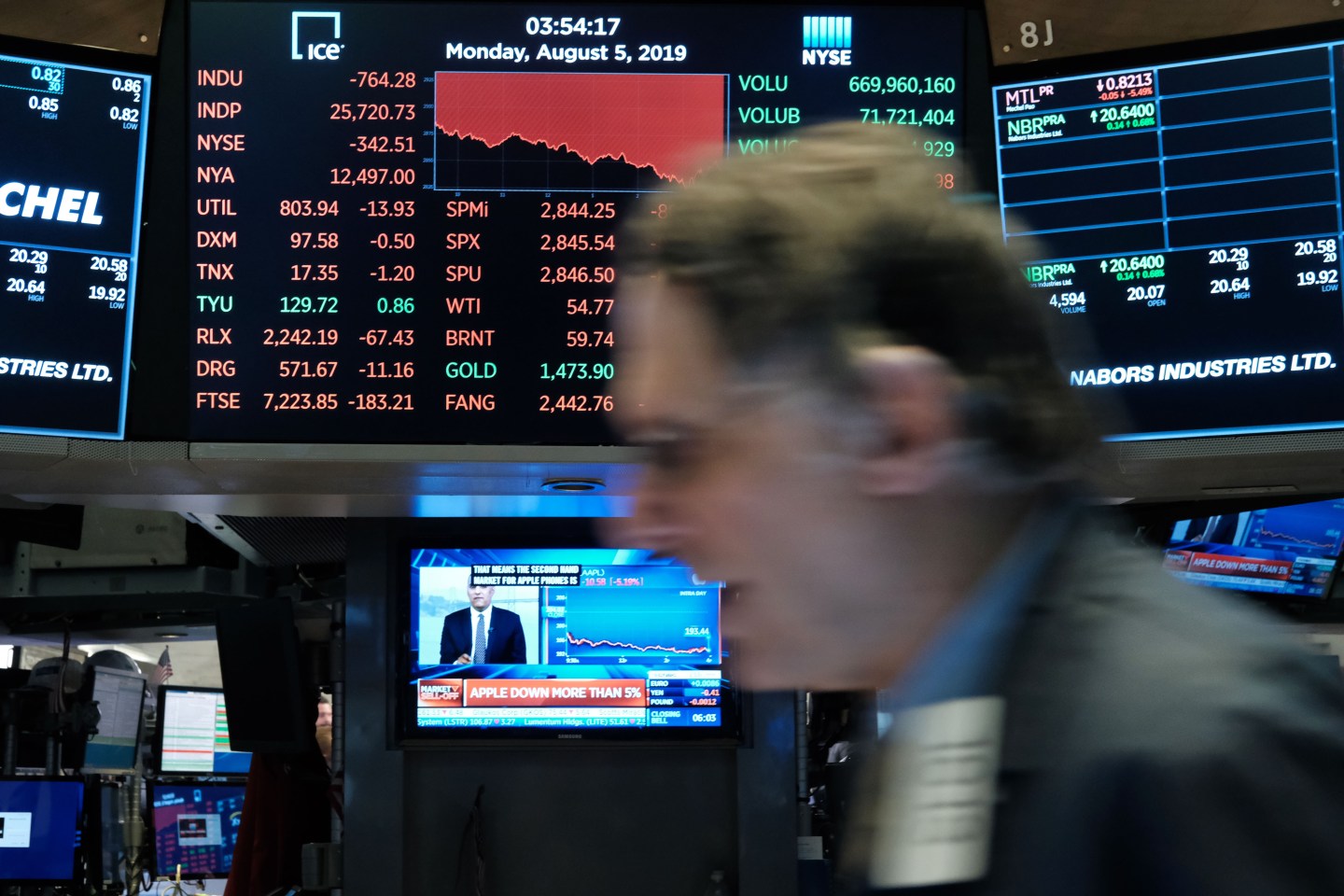 NEW YORK, NEW YORK - AUGUST 05: Traders work on the floor of the New York Stock Exchange (NYSE) on August 05, 2019 in New York City. The Dow fell over 700 points on Monday over fears of a growing trade war between China and America. (Photo by Spencer Platt/Getty Images)
Spencer Platt—Getty Images

If last week was a tough one for U.S. tech stocks, this one starting off in an even uglier fashion.

While some stocks recovered somewhat in the final trading hour, the carnage was apparent. The Dow Jones Industrial Average fell 2.9%, or more than 700 points, while the S&P 500 Index sank 3%. The declines in all three indexes were the biggest to date in 2019.

Big tech stocks, particularly those with exposure to China’s market, were hit especially hard. Apple fell more than 5%, while chip manufacturers Texas Instruments and Nvidia fell 4% and 6.5%, respectively. Even software giants with some exposure to China fell harder than the Nasdaq, with IBM down 4.4% and Adobe off 4.5%.

Late last week, President Trump announced on Twitter a “small additional Tariff of 10% on the remaining 300 Billion Dollars of goods and products coming from China” that would start Sept. 1. The new tariff adds to $250 billion in goods already under a 25% tariff. While the initial impact of the tweet was muted, stock markets in Europe and Asia sold off after China responded to the new tariffs by allowing China’s currency to weaken.

The people’s Bank of China allowed the yuan to weaken below 7 units per U.S. dollar, putting the blame for the move on what it termed Trump’s “unilateralism and trade protectionism measures and the imposition of increased tariffs on China.” A weaker yuan can blunt some of the effect of U.S. tariffs by making Chinese goods cheaper in dollar terms but can lead to broader effects that can be hard to predict.

In equity markets, where uncertainty can prompt investors to retreat to the sidelines or move some of their holdings into cash, few things can inject uncertainty quite so quickly as a trade war. Many investors and economists consider trade wars messy affairs at best, if not wholly unwinnable.

In a research note Monday, Julian Evans-Pritchard, an economist at Capital Economics, said that China appeared to “have all but abandoned hopes for a trade deal with the US.” Given that view, the country “appears to have decided that… the boost to China’s export sector from currency depreciation is worth attracting the ire of the Trump,” he said.

The extra tariffs may also weigh on consumer budgets since economic studies show that tariffs imposed by the U.S. last year are nearly always passed on to the domestic price of the affected goods. One recent study by Liberty Street Economics found U.S. tariffs imposed in 2018 added $419 in additional costs per U.S. household. That figure could rise depending on what additional tariffs are imposed this year.

Consumer spending, which makes up 68% of U.S. gross domestic product, isn’t likely to fall off a cliff, but the higher costs for imported goods may take a modest toll. “Our bet is that consumer price inflation will rise slightly,” Wells senior economist Tim Quinlan wrote in a note Monday. “Although that will not derail consumer spending, the latest round of tariffs could weigh on confidence.”

A bite out of the Apple

Tech companies like Apple that manufacture goods inside China are likely to feel the weight of new tariffs. In June, Apple wrote to U.S. Trade Representative Robert Lighthizer arguing that additional tariffs could affect nearly every Apple device, including the iPhone, which accounts for nearly half of Apple’s total revenue. Apple’s stock closed Monday at its lowest level in seven weeks.

In recent months, U.S. stocks have occasionally reeled in response to the prospect of a growing U.S.-China trade war, only to recover and march on to new highs. This time, however, there are other factors at play that could made that scenario less likely.

“The fundamentals are impacted by the trade war and by tariffs, but that’s not the only reason for the sell-off here,” Peter Cecchini, global chief market strategist at Cantor Fitzgerald, said Monday. “I think it’s a deeper wound in the global economy that the market is suffering right now.”

Unlike the brutal tech selloff of late 2018, tech and other sectors in the U.S. are more highly valued, giving them less room to bounce back. The Nasdaq Composite’s price-earnings ratio ended last week at 24.9, higher than the S&P 500’s 22.9 PE ratio and the ratio of 19 for stocks in the Dow.

And the Federal Reserve signaled last week that it may not be as accommodative on future interest-rate cuts than some investors had been hoping. “We’ve pretty much got what we’re going to get out of the Fed,” Cecchini said. “Earnings have flattened out at best, and global growth continues to look pretty weak.”