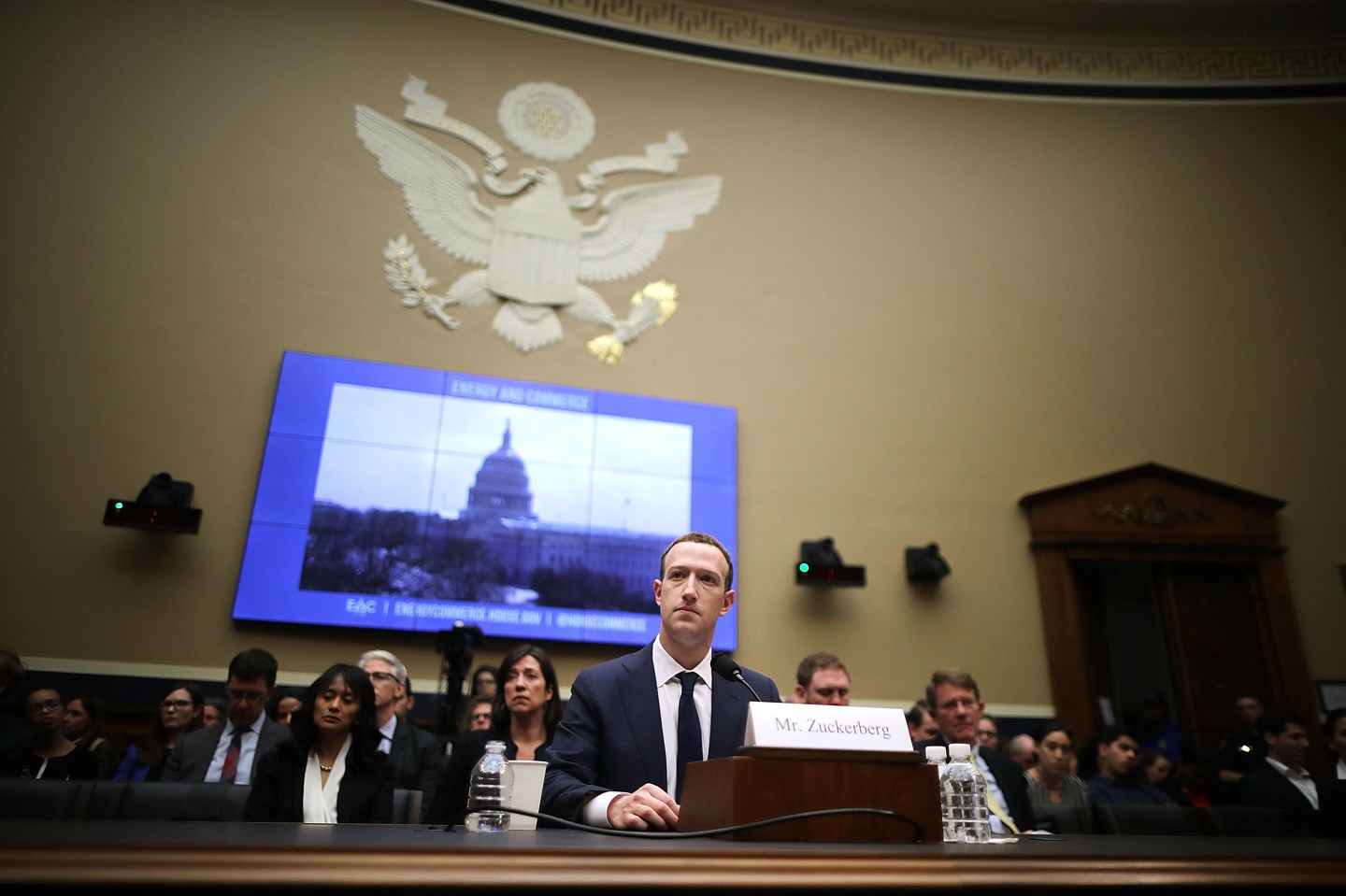 WASHINGTON, DC - APRIL 11: Facebook co-founder, Chairman and CEO Mark Zuckerberg testifies before the House Energy and Commerce Committee in the Rayburn House Office Building on Capitol Hill April 11, 2018 in Washington, DC. This is the second day of testimony before Congress by Zuckerberg, 33, after it was reported that 87 million Facebook users had their personal information harvested by Cambridge Analytica, a British political consulting firm linked to the Trump campaign. (Photo by Chip Somodevilla/Getty Images)
Chip Somodevilla—Getty Images

The coming battle over tech policy will be at multiple levels, including antitrust, privacy, and regulation. Fortune will convene a town hall meeting at next week’s Brainstorm Tech event in Aspen, Colo., to assess what is likely to happen. (It will be hosted by Marketplace Radio’s Kai Ryssdal.) One specific policy question is whether online platforms like Facebook, Twitter, Google, and YouTube are publishers.

By law, the answer in the U.S. has been “no” since 1996, when Congress enacted Section 230 of the Communications Decency Act. It protects companies that provide a digital bulletin board for the posts of their users from being sued for their content. Politicians are suggesting Section 230 be revisited. It seems obvious to me that the platforms are publishers. Historian Margaret O’Mara, writing in The New York Times, argues that “as online platforms become more powerful than all other media, it is time for policymakers to step back in” and regulate them. (Her headline is spot on: “Letting the Internet Regulate Itself Was a Good Idea—In the 1990s.”) Andy Kessler, as gifted an essayist as a stock picker, thinks breaking up Facebook or making it a utility will solve nothing. (Instead he argues vaguely, in The Wall Street Journal, for the elixir of openness, though he isn’t clear if said remedy should be compulsory or voluntary.)

As this debate heats up, I am reminded it isn’t new. Six years ago, I invited journalist George Packer to Aspen because I admired a New Yorker article he wrote, which read as unused material from his National Book Award winning The Unwinding that challenged Silicon Valley’s piousness. I thought it’d be a good idea for the tech industry to hear Packer’s perspective. In our interview—the room got heated, as this article reminded me—Packer accused the tech industry of killing, not creating, jobs. “Stop saying [tech] is going to be good for you and that this is about improving human life across the board,” Packer told a partly hostile audience. “You can have it one way or the other, but you can’t say on the one hand, ‘We’re changing the world’ and on the other hand ‘Why is it our problem if the world is falling into decline?’”

This weekend I finished Packer’s outstanding new book, Our Man: Richard Holbrooke and the End of the American Century. It’s a look backward at foreign policy and says nothing about technology. Packer himself was downright prescient about the pressure tech finds itself under now.

Peeking behind the curtain. Speaking of the coming battles over tech policy, some have clearly arrived. The United Kingdom's Competition and Markets Authority said on Friday that it is investigating Amazon's minority investment in food delivery startup Deliveroo. Amazon announced its planned $575 million backing in May. The authority also announced on Wednesday a probe into digital advertising and consumer data practices at Google and Facebook. Separately, the U.K. Information Commissioner's Office fined British Air $229 million over the theft of personal information of some 500,000 customers.

Peeking behind the curtain, part two. The FBI and ICE have been using millions of photos in state drivers license databases as the basis for facial recognition searches, The Washington Post reported. Law enforcers need no special permission to execute a search, sometimes simply making an emailed request, the paper noted.

Supply and demand. It's not a sight you see very often, but avid home PC builders were lining up outside stores on Sunday to buy the latest CPU chips from Advanced Micro Devices, the 3rd generation in its Ryzen line. It look like the PC industry could use a boost, as Samsung on Friday warned its operating profit is falling like a stone due to plunging prices for memory chips sold by the company.

Filling the coffers. Before going public later this year, office space supplier WeWork is looking to borrow as much as $4 billion. The cash would bolster the startup's balance sheet before an initial public offering, at least in theory reducing investors' concerns about WeWork's huge losses. But while one company prepares to join the stock market, another may be disappearing soon. Cybersecurity firm Symantec could be acquired by chipmaker Broadcom for $22 billion including debt.

Quadrophonic. As T-Mobile and Sprint try to convince antitrust regulators to approve their merger, the fray may have attracted a new player. The two carriers had been negotiating to spin off some assets to Dish Network for the creation of a new wireless service. Now The New York Post reports that Google may be getting involved in the potential new carrier. But...a Google spokesperson was having none of it: “These claims are simply false. Google is not having any conversations with Dish about creating a wireless network.”

Users of the Google traffic app Waze are fastidious about reporting all manner of roadside obstacles and slowdowns, including traffic accidents. Some studies show that "Wazers" actually reports crashes more quickly than callers to emergency services. Aarian Marshall reports for Wired on researchers now seeing if they can combine vast amounts of Waze reports with other data sets to predict crashes before they happen. It's not an easy problem, as computer apps generally are not good at predicting rare events.

“You have to have a lot of data, and diverse types of data, and then be able to analyze it for it to be actionable instead of just piling up,” says Christopher Cherry, an engineering professor with the University of Kentucky who recently completed a study of how traffic data could be used to improve road safety. The traffic data itself is useful, sure. But to predict the risk of crashes, and to prevent them, you should also probably have a sense for where crashes are happening, and what the roads in question look like, and how those roads perform under different weather conditions. And then you have to link all those datasets up and help them “talk” to each other—no small feat.

Villains throughout history have sometimes taken to destroying great works of art that offend them. Think of the nose of the Sphinx on the Giza Plateau or the Temple of Artemis at Ephesus. More recently, the Islamic State group destroyed ancient relics in Iraq. But digital archaeologists are recreating some of the latest victimized works by using photographs and 3D-printers. A replica of the statue known as the Lion of Mosul is on display at London's Imperial War Museum as part of an exhibit on art lost in wartime.