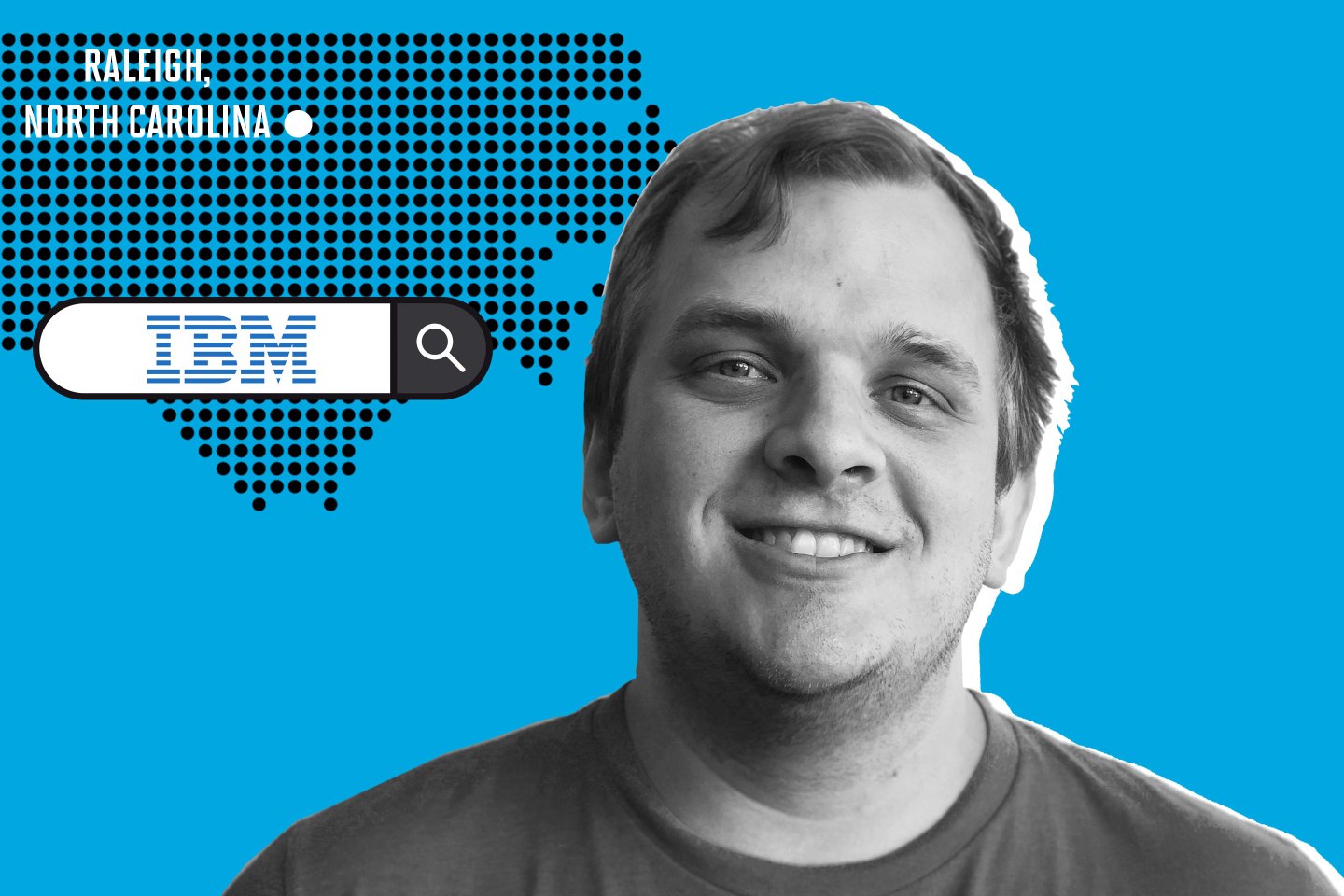 Fortune’s Entry/Level column is dedicated to people looking for and working in entry-level positions—read the full series here. We interview entry-levelers about their jobs, how they got them, what they want to do next, and more.The subject’s answers are edited for clarity.

Chris Walker grew up in the suburbs of Georgia. After high school, he spent eight years in active duty and three years in the reserves with the Army, eventually becoming a sergeant. After two deployments, he left the Army and went to college at the University of Tennessee in Knoxville for a degree in business analytics, graduating in May 2018. Now, at 29, Walker is beginning his career as a civilian in Raleigh, N.C. in IBM’s Enterprise Operations and Services (EO&S) rotational program. He is currently in a rotation in the chief analytics office, working on developing A.I. solutions to analyze IBM’s patent paperwork.

Here’s what Walker has to say about…

It’s the cognitive-based, or A.I., project. I’ve been doing more on data science tech like coding and using Python to help solve and implement AI solutions.

Typically, I get in between 7 a.m. and 7:30 a.m. Normally during that first few hours of the day, before the office gets busy, I’ll try to finish up any tasks I have outstanding. I try to have any meetings with international team members in the mornings, and then later throughout the day, I’ll have a couple of other meetings. Typically, I will leave here about 4 p.m. to 5 p.m. They allow us to work basically on our own schedule. So as long as we’re getting our jobs done, we can choose the hours we work to an extent.

We rotate every year. When I came into the program, it was three years total, but they’ve since changed it to two years. I’ll be coming up on my time [to rotate to another department], but for my current rotation, I got put in charge to run a project here. So I worked out a way to stay on and continue working in my current role for another year. I can see this project to its end, just because of all the work and effort my team and I put into it.

Choosing to serve in the Army before pursuing a career as a civilian:

When I was in high school, I didn’t feel college was the right path for me. My senior year, I enlisted in the Army. I don’t regret joining the military—it taught me a lot, especially about myself. And it helped me grow to be a better person. Those experiences, they’re both good and bad, that come with being in the military helped shape the person that I am. And it’s really encouraged me to give back in different ways.

IBM held an information session with the Business Analytics Society I was in at school. The possibilities sounded like something I was interested in in the technology field, so I sent in my resume and that started the process. A little time after, I received an email for a video interview. And then I had an interview with one of the people in the program who had been in it for a couple of years. After that, I received another email inviting me for the next phase of the interview process, which was to come out here to the Raleigh campus to do the in-person interview. I did that on a Tuesday and Friday the same week I received my offer.

I was talking to a few different companies, but I had a feeling that opportunities at IBM might allow for better growth, education, and development, so I accepted.

A skill from the military that he takes to work:

One of the things that the Army taught me was adaptive leadership. And before I got out, I was a sergeant, so I was in charge of other soldiers below me, as well as having to take directions from above. I had to adjust the way that I interacted with people.

For example, we spent about half a day over Memorial Day weekend helping out veterans with disabilities play sitting volleyball. We did anything the veterans or coordinators needed help with from being line judges to assisting the veterans as they got around.

His time in the Army:

I spent eight years in active duty. My first duty location was in South Korea, and then I went back to Georgia at Ft. Stewart. When I was there, I deployed to Iraq for one year. I really wanted to experience Germany when I was in the Army, so I reenlisted for an additional five years. When I got back from Iraq, I moved to Germany for almost three years. And during my time in Germany, I was deployed to Afghanistan. By then, I had accomplished everything I wanted to in the Army and was looking to transition from the military back to civilian life and complete my education.

So when I got back to Germany, I transferred back to the United States. I was back in Georgia at Ft. Gordon for about a year before I got off active duty in 2015. By that point, I didn’t really know if I wanted to continue on in reserves or just get out completely. So I did a three-year term in the Army reserves, and my unit was in Nashville, Tennessee, which was close to where I was going to school in Knoxville.

Going to college after eight years of active-duty service:

I spent three years getting my degree. During my time in active duty, I took a few night classes. Having that reserve kind of helped ease me from the day-to-day life of living and breathing the Army as an active duty soldier. I was a college student, and then one weekend a month, I would go back and be able to have that same type of bond with some of the members of my unit. Through those night classes, I had my freshman year of classes already taken care of. So I was able to finish the rest in three years. The Army paid for my education through the GI Bill.

I got involved with the veteran’s student group on campus. I eventually served as the president in my senior year. Having the community definitely helps. Being able to talk with people around my age or who have similar backgrounds was great.

How being a veteran helped him in school:

I was able to focus better after being in the Army. Eight years before, when I was 18, I don’t think I would have had the drive or determination to start school then.

Relocating for the job:

Relocating was not as stressful for me because, through my time in the military, I was used to moving every few years. Part of the offer included a sign-on bonus, which helped pay for relocation.

Because my lease was running out, I had time to move out to the Raleigh area about a month before my actual start date. It was nice to be able to get to know the area and not have to rush and immediately start the job.

I live in a part of Raleigh called Cary. My rent is roughly $1,100.  But it can be a little bit higher living in downtown. I have a one-bedroom.

I would like to stay at IBM and continue working in the data science field.

Advice to his younger self:

I think one thing would be don’t worry too much about the small issues that come up. They tend to work themselves out. And it’s basically not worth the stress to get worked up about.

When I was applying for all these places, I knew the worst answer I’d get was no. So I just made myself try to apply to all these different jobs. Because I may not have been fully qualified, it’s still worth the effort to at least send in an application.

—How this NYU grad landed an entry-level job at Google