Trump and Xi Agree to Truce in US-China Trade War 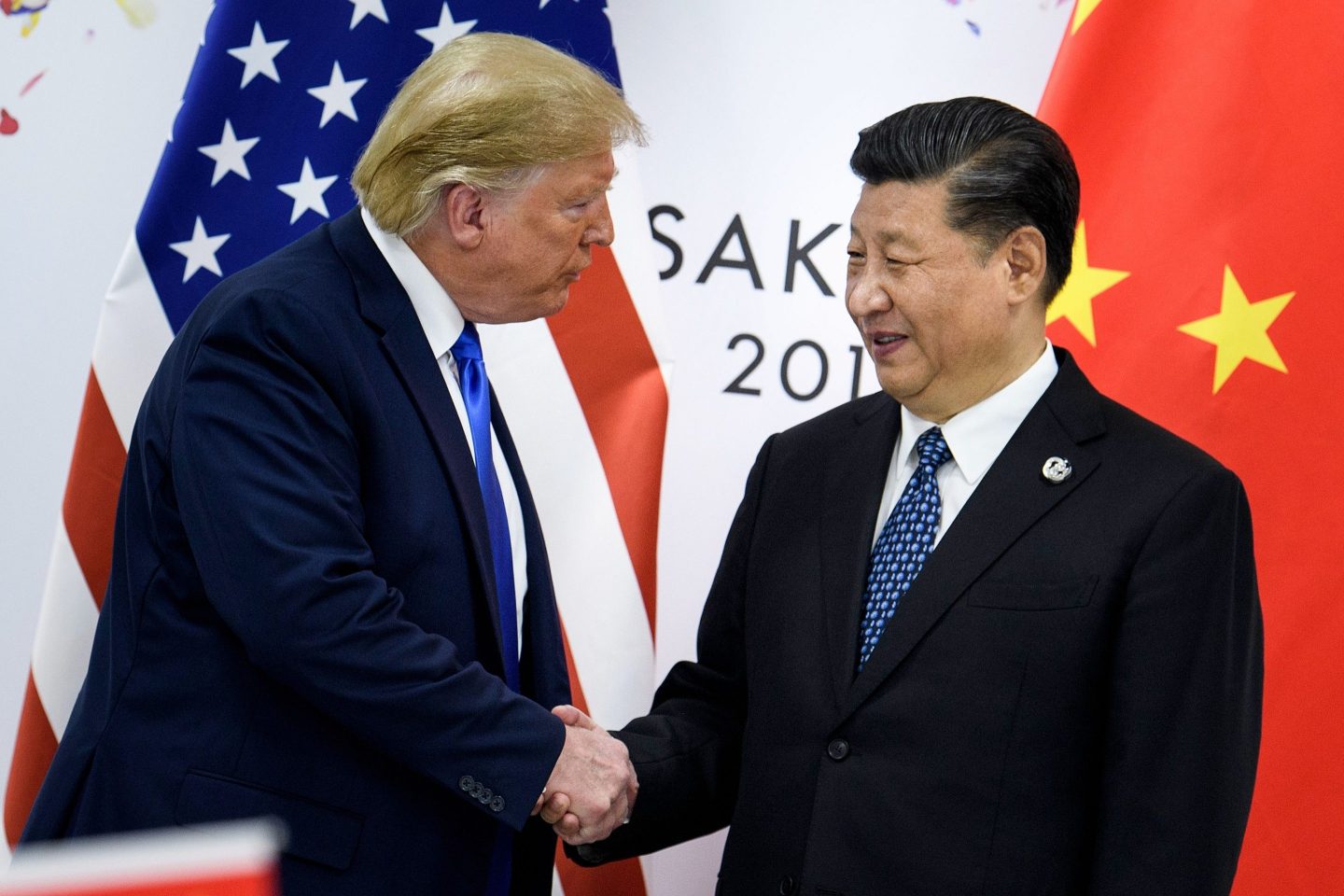 President Donald Trump and China’s Xi Jinping agreed to a cease-fire Saturday in their nations’ yearlong trade war, averting for now an escalation feared by financial markets, businesses and farmers.

Trump said U.S. tariffs will remain in place against Chinese imports while negotiations continue. Additional trade penalties he has threatened against billions worth of other Chinese goods will not take effect for the “time being,” he said, and the economic powers will restart stalled talks that have already gone 11 rounds.

“We’re going to work with China where we left off,” Trump said after a lengthy meeting with Xi while the leaders attended the Group of 20 summit in Osaka.

While Trump said relations with China were “right back on track,” doubts persist about the two nations’ willingness to compromise on a long-term solution. Among the sticking points: The U.S. contends that Beijing steals technology and coerces foreign companies into handing over trade secrets; China denies it engages in such practices.

The apparent truce continues a pattern for Trump and Xi, who have professed their friendship and paused protectionist measures, only to see negotiations later break down.

The United States has imposed 25% import taxes on $250 billion in Chinese products and is threatening to target an additional $300 billion, extending the tariffs to virtually everything China ships to America.

China has countered with tariffs on $110 billion in American goods, focusing on agricultural products in a direct and painful shot at Trump supporters in the U.S. farm belt.

Some progress seemed to be made in a dispute involving the Chinese telecommunications company Huawei, which the Trump administration has branded a national security threat and barred it from buying American technology. Trump said Saturday he would allow U.S. companies to sell their products to Huawei, but he was not yet willing to remove the company from a trade blacklist.

The U.S. has tried to rally other nations to block Huawei from their upcoming 5G systems.

The Trump-Xi meeting between the two leaders was the centerpiece of four days of diplomacy in Asia for Trump, whose re-election chances have been put at risk by the trade dispute that has hurt American farmers and battered global markets. Tensions rose after negotiations collapsed last month.

Trump said the talks with Xi went “probably even better than expected.”

Both men struck a cautiously optimistic tone after they posed for photographs.

“We’ve had an excellent relationship,” Trump told Xi as the meeting opened, “but we want to do something that will even it up with respect to trade.”

Xi recounted the era of “pingpong diplomacy” that helped jump-start U.S.-China relations two generations ago. Since then, he said, “one basic fact remains unchanged: China and the United States both benefit from cooperation and lose in confrontation.”

“Cooperation and dialogue are better than friction and confrontation,” he added.

The meeting with Xi was one of three that Trump held Saturday with world leaders who display authoritarian tendencies.

Trump, who referred to the Saudi royal as his “friend,” has long tried to minimize the prince’s role in the murder and has been reluctant to criticize the killing of the Saudi critic at the kingdom’s consulate in Istanbul last year. Trump views Saudi Arabia as the lynchpin of U.S.’ Middle East strategy to counter Iran.

At a news conference after the summit, Trump said Khashoggi’s killing was “horrible,” but that Saudi Arabia had “been a terrific ally.” Trump suggested he was satisfied with steps that the kingdom was taking to prosecute some of those involved, while he claimed that “nobody so far has pointed directly a finger” at Saudi Arabia’s future king.

U.S. intelligence officials have concluded that bin Salman must have at least known of the plot.

The summit came a week after Trump pulled back from ordering a military strike on Iran for downing an American unmanned spy plane. Iran now stands on the threshold of breaching uranium enrichment thresholds set in a 2015 nuclear deal from which Trump withdrew. Trump said he would not preview his response should Iran top that limit, but said, “We cannot let Iran have a nuclear weapon.”

Trump said the two will “look at different solutions” to Turkey’s planned purchase of the Russian-made S-400 surface-to-air missile system. U.S. officials have threatened to halt the sale of U.S.-made F-35 Joint Strike Fighter to Turkey if the Russian purchase goes through; Erdogan has called it a done deal.

“Turkey has been a friend of ours,” Trump said. He blamed the Obama administration for not agreeing to sell U.S.-made Patriot missile batteries to Turkey, calling the situation a “mess” and “not really Erdogan’s fault.”

A day earlier, Trump met with Russia’s Vladimir Putin and, with a smirk and a finger point, jokingly told him, “Don’t meddle with the election.” It was their first meeting since special counsel Robert Mueller concluded that Russia extensively interfered with the 2016 campaign.

Pressed whether he pushed the issue more seriously in private, Trump said he had raised it with Putin, adding, “You know he denies it, totally. How many times can you get someone to deny something?”

Putin told reporters that “we talked about it,” but he did not elaborate. He said he believes it’s necessary to “turn the page” in relations with the U.S., which have plunged to the lowest level since the Cold War times.

— A fear at the G20 summit: that the U.S.-China trade war turns into a currency conflict

—Trade war be damned, Apple is moving its Mac Pro production to China