Why Coffee Stocks Like Starbucks and Dunkin’ Are Suddenly Piping Hot 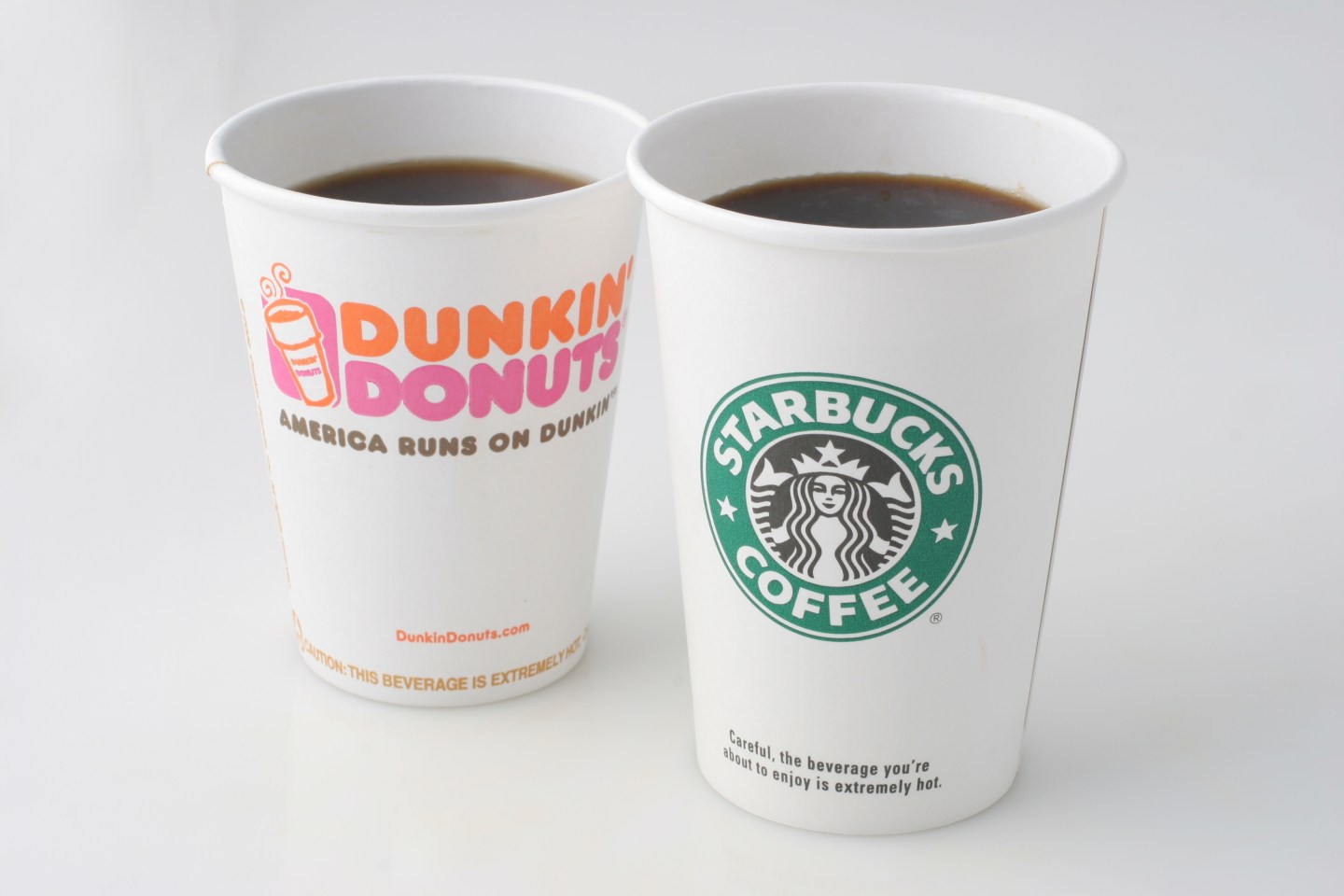 Dunkin’ shares have already risen 25% year to date, while Starbucks’ have risen 29%.

Dunkin’ Brands Group got an upgrade on Monday by Wedbush Securities from a ‘neutral’ rating to ‘outperform.’ The company’s new price target of $92 is 16% above Dunkin’s close on Friday at $79, and significantly higher than Wedbush’s previous target of $76 per share.

Wedbush analyst Nick Setyan (who upgraded the stock) told Fortune that both Dunkin’s same-store sales growth and unit growth had been decelerating for the past three years from consistent single digits to less than 1% and 2% respectively. But Setyan believes the company’s strong 1st quarter reports suggest improvement.

“Throughout that time, it was very difficult to look at this name from a very positive angle.” Now, “we saw the first inflection in terms of sales growth in years,” Setyan told Fortune. “That inflection could continue to [the 2nd quarter].” More importantly, says Setyan, he sees “optimism on the part of franchisees.”

“As opposed to really putting money behind multiple offerings, they’re much more focused around things that actually are driving sales,” Setyan says. “Whether it’s the go-tos or the espresso beverages, the message is more focused. It’s aligned across the entire system, and so it does seem like, at least from the franchisee perspective, they’ve appreciated that part of it.”

Meanwhile in Seattle, Starbucks too has been rebounding from losses last year. The company beat earnings expectations for the 1st quarter by over 7%, also raising its outlook for the rest of 2019. Much like Dunkin’, Starbucks also beat same-store sales growth, reporting 3% versus a 2.9% estimate, according to the company’s earnings report.

In fact, Starbucks got an ‘outperform’ rating on Tuesday as well. Credit Suisse called the company “one of the highest quality growth companies in restaurants” in an analyst note, citing its positive margin expansion and around 8% revenue growth.

And for those like Ivan Feinseth, the chief investment officer and director of research at Tigress Financial Partners, Starbucks’ strong numbers in the 1st quarter could continue even longer.

For an analyst who doesn’t drink coffee (“only sweet tea and hot chocolate”), Feinseth thinks Starbucks has an edge over Dunkin’ when it comes to innovation. “Everybody is always focused on same-store sales growth, but Starbucks is really emphasizing their rewards program,” Feinseth said. “Dunkin’ doesn’t have the level of digital marketing and digital outreach with their rewards program that Starbucks has.”

Additionally, Feinseth believes the shift in focus toward eating at home may be giving Starbucks an upper hand with both their deal with Nestlé and partnership with Lyft for delivery. And the difference in their brands (what Feinseth calls “premium-priced” for Starbucks versus “value-priced” for Dunkin’) could also play into growth prospects if Starbucks continues pushing for a more luxury experience with their roasteries (as currently found in major cities).

One possible trouble spot: Setyan is concerned about Starbucks’ heavy bet on China. He says it’s where 50% of their growth will come from as the company plans to open 6,000 stores by 2022. Given that exposure he thinks the coffee company could be at the mercy of trade war tensions and could lose ground if Chinese consumers shift away from American brands.

“We’ll see how that plays out in the next few quarters and perhaps the next few years or so, but [Starbucks’ bet on China] is the main reason why, relatively speaking, I’m a little bit more cautious on Starbucks than Dunkin’ going forward,” Setyan said.

Overall, analysts seem to think that amid uncertainty with the global economy, consumer staples like Dunkin’ and Starbucks are sensible bets. “Both companies have huge economies of scale, loyal customers, and powerful brands, all key prerequisites to maintain their market shares and profitability,” David Dietze, the founder, president and chief investment strategist at Point View Wealth Management, told Fortune in a note.

After all, if trade jitters are keeping investors up at night, they’re going to need a lot of strong coffee in the morning.