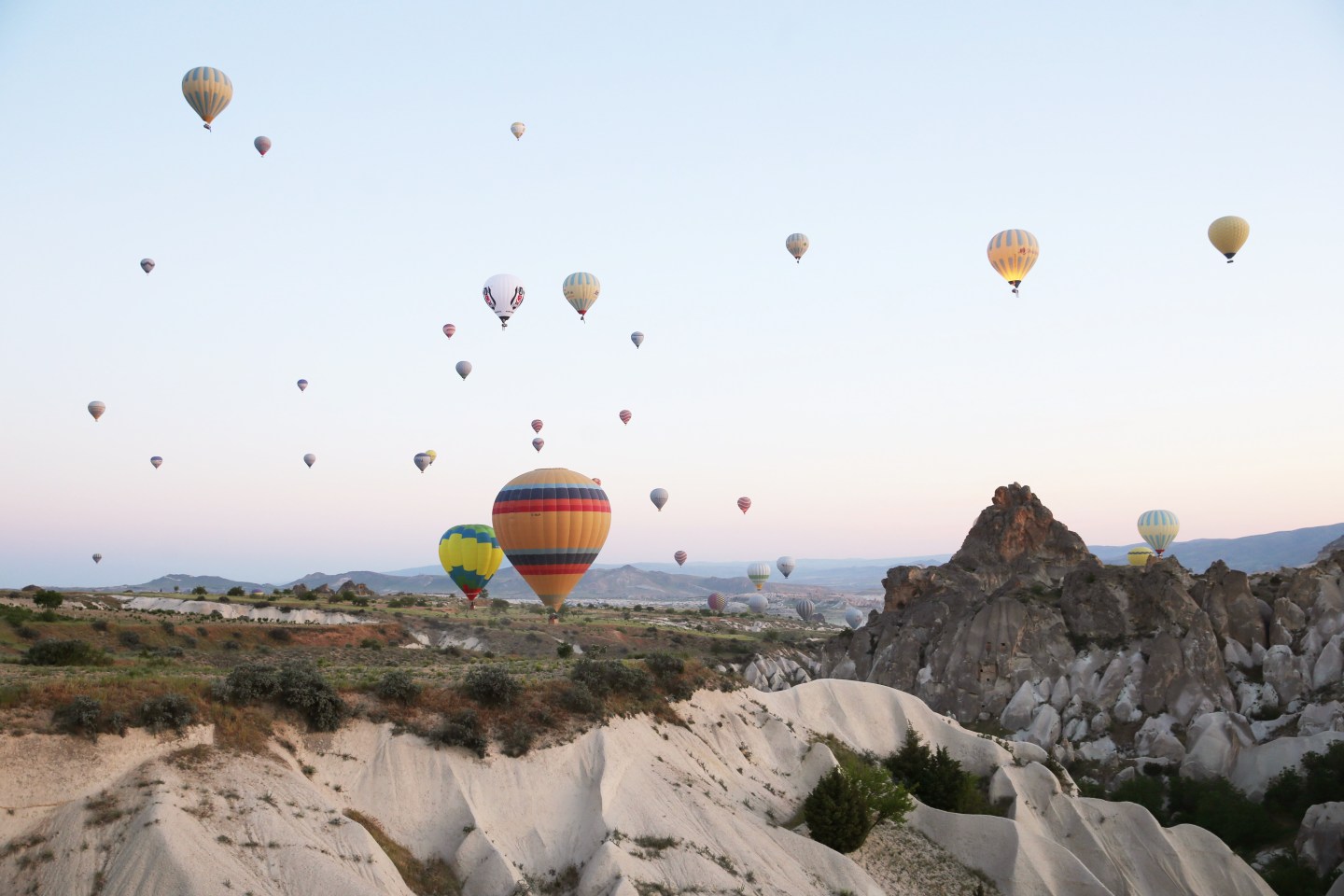 Good morning, Data Sheet readers. Robert Hackett, your weekend columnist, filling in for Adam and Aaron today. Since the cats are away, I’ve consulted my trusty buzzword dartboard to see how many fads I might tick off in one go.

Today I write to you about Helium, a 6-year-old startup cofounded by Shawn Fanning, inventor of Napster (yes, it gets better). The firm, which just raised $15 million on top of $38 million it had already raised, has developed a long-range, low-power wireless protocol for transmitting data. This is not Bluetooth, not WiFi, and no, definitely not cellular. Helium calls its brand of radio frequency communications “LongFi,” because its range is supposedly hundreds of times greater than that of Wi-Fi while remaining more affordable, i.e. a thousand times cheaper, than cellular. To envelop an entire city “only about 50 to 150 hotspots” are required, the company says.

“We call it the people’s network,” says Amir Haleem, Helium’s CEO, who dropped out of college at 18 to play video games professionally, before e-sports were really a thing. (We’re talking Doom and Quake era.) In fact, Haleem met his cofounder Fanning on that scene.

While Helium’s grassroots telecommunications idea may sound kooky, it has already attracted some big name partners. The company is helping Nestle track water levels in its ReadyRefresh coolers inside offices. It is keeping tabs on pets with InvisiLeash. And it is monitoring lost or stolen scooters and bicycles in partnership with Lime. Applications abound anywhere one needs to transmit data on-the-ground back to headquarters.

In order to incentivize people to support the infrastructure, the mesh network that is the heart of Helium’s plan, the company is selling $495 hotspots to consumers. (Er, happy Father’s Day?) These devices, which are said to draw about 6 cents worth of electricity per day, are designed to spit out digital coins every so often. It’s a blockchain “reward system,” Helium says. Presumably, if people take to the idea, these tokens will accrue in value, and consumers will make a profit selling them on cryptocurrency exchanges. Sound familiar?

On the matter of the SEC’s antagonism, Haleem echoes the disappointment of fellow cryptocurrency entrepreneurs. “It’s difficult and frustrating in a way because we wish there was clearer guidance,” he says. When asked about his token’s possible value, Haleem disclaims any knowledge, responsibility, or promise. “The process will play out in secondary or other markets and we’re not involved.”

When I suggest to Haleem that he may eventually face a significant competitive threat in the likes of Apple, which just debuted a Bluetooth-beaconing “find my” feature for locating lost iPhones and other products at its Worldwide Developer Conference, Haleem takes the remark as a sanity-reaffirming compliment, rather than as an existential reality check. “It’s a reminder we’re not actually that crazy,” he says. “This is still a thing people need that hasn’t been solved well, that you can’t do with cellular.”

As zany an idea as Helium’s might seem, there’s something to it. Maybe the company isn’t just full of hot air.

Tipping the scales. Helium isn't the only company dabbling in cryptocurrency; details about Facebook's digital coin endeavor, Project Libra, continue to trickle out. The latest: the media giant has partnered with more than a dozen companies, including Visa, Mastercard, PayPal, Uber, Stripe, Booking.com, and Argentinian MercadoLibre on the payments technology, the Wall Street Journal reports. The participants are said to be contributing $10 million apiece. Fortune is slated to receive an embargoed briefing from Facebook later today, and we presume it may have to do with this.

Pay your way. As Facebook looks to monetize WhatsApp, the company has plunked down a supposedly "very significant" investment in Meesho, an Indian social-commerce startup, TechCrunch reports. The startup runs an online marketplace that connects sellers with customers on social media, especially via WhatsApp. Meesho's users are predominantly female and it claims to have more than 2 million resellers on its site.

Huawei-t a minute. Huawei is delaying the debut of its foldable smartphone, the Mate X, from June to September. The reason is apparently because the company does not wish to fall on its face the way Samsung did with the release of its malfunctioning Galaxy Fold. "We don’t want to launch a product to destroy our reputation," a Huawei spokesperson told CNBC.

This is your brain on blockchain. Another enterprise blockchain pilot is underway. This one has IBM, KPMG, Merck, and Walmart teaming up to track prescription drugs through their supply chains. The alliance aims to satisfy regulations coming out of the U.S. Food and Drug Administration, which is seeking means to electronically audit the industry.

Where the chips fall. U.S. chipmaker Broadcom reported lower than expected revenue for the second quarter and cut its guidance. The company attributed the pullback to the U.S.-China trade conflict and restrictions on Huawei, which is impacting demand.

I got 5 on it. The share price of Fiverr, a freelance marketplace for gig economy workers, nearly doubled—lifting 90%—upon the stock's debut on the New York Stock Exchange. The company reported $36.1 million in net losses on $75.5 million in revenue in 2018.

A few longer reads (and watches) that I came across this week that may be appealing for your weekend reading pleasure:

America Is Stuck With a $400 Billion Stealth Fighter That Can’t Fight (The Daily Beast) | Here’s something the public didn’t know until today: If one of the U.S. military’s new F-35 stealth fighters has to climb at a steep angle in order to dodge an enemy attack, design flaws mean the plane might suddenly tumble out of control and crash.

Inside A Tech-Free School Where Tech Executives Send Their Kids (CNBC) | The Waldorf teaching philosophy is used at more than 1,000 institutions in 91 countries, including 136 schools in the U.S. Technology and screens aren't used at all through 8th grade, and are scarce even in high school.

I Wrote This on a 30-Year-Old Computer. And It Was Awesome. (The Atlantic) | Everything about this computer is loud: The groan of the power supply is loud. The hum of the cooling fan is loud. The whir of the hard disk is loud. The clack of the mechanical keyboard is loud. It’s so loud I can barely think, the kind of noise I usually associate with an airline cabin: whoom, whoom, whoom, whoom. This is the experience a computer user would have had every time she booted up her Macintosh SE, a popular all-in-one computer sold by Apple from 1987 to 1990.

The Curse of the Ship of Gold (Narratively) | How a brilliant scientist went from discovering a mother lode of treasure at the bottom of the sea to fleeing from authorities with suitcases full of cash.

The Aristocrats of Motordom. Why did the internal combustion engine win out over the electric motor? That's one of the questions Dan Albert, an automotive journalist, ponders in his new book tracing the history of the automobile, Are We There Yet?. In the following excerpt, published by LongReads, Albert surveys early iterations of these self-propelled machines—including the incredibly peculiar Jesuit rat car of 1672—and asks why it took so long for the invention to take hold.

Rather than looking in vain for an ur automobile or the mythical figure who invented it, we should instead ask why the technology was taken up when it was. Why did the American automobile suddenly seem like such a good idea in the 1890s? Within the space of a few years, not one or two odd inventors, but dozens, began showing off experimental autos.... Inventors were coming out of the woodwork. They dreamed up contraptions and Americans bought them. By 1899, commentators and industry experts saw that the motorcar was destined to revolutionize American life in profound ways.

Fintech Unicorn Monzo Is Expanding Into the U.S. by Lucinda Shen

Ye Mirror Blacke. Fears of human-enslaving A.I. robots got you down? Here's a little lighthearted fun to ease you into the weekend. This Luddism-parodying College Humor sketch reimagines Black Mirror episodes as taking place in medieval times. See how books, plows, crossbows, and yokes will doom humanity. As one woman in the video puts it, "Well, technology will truly be the ruin of us all."