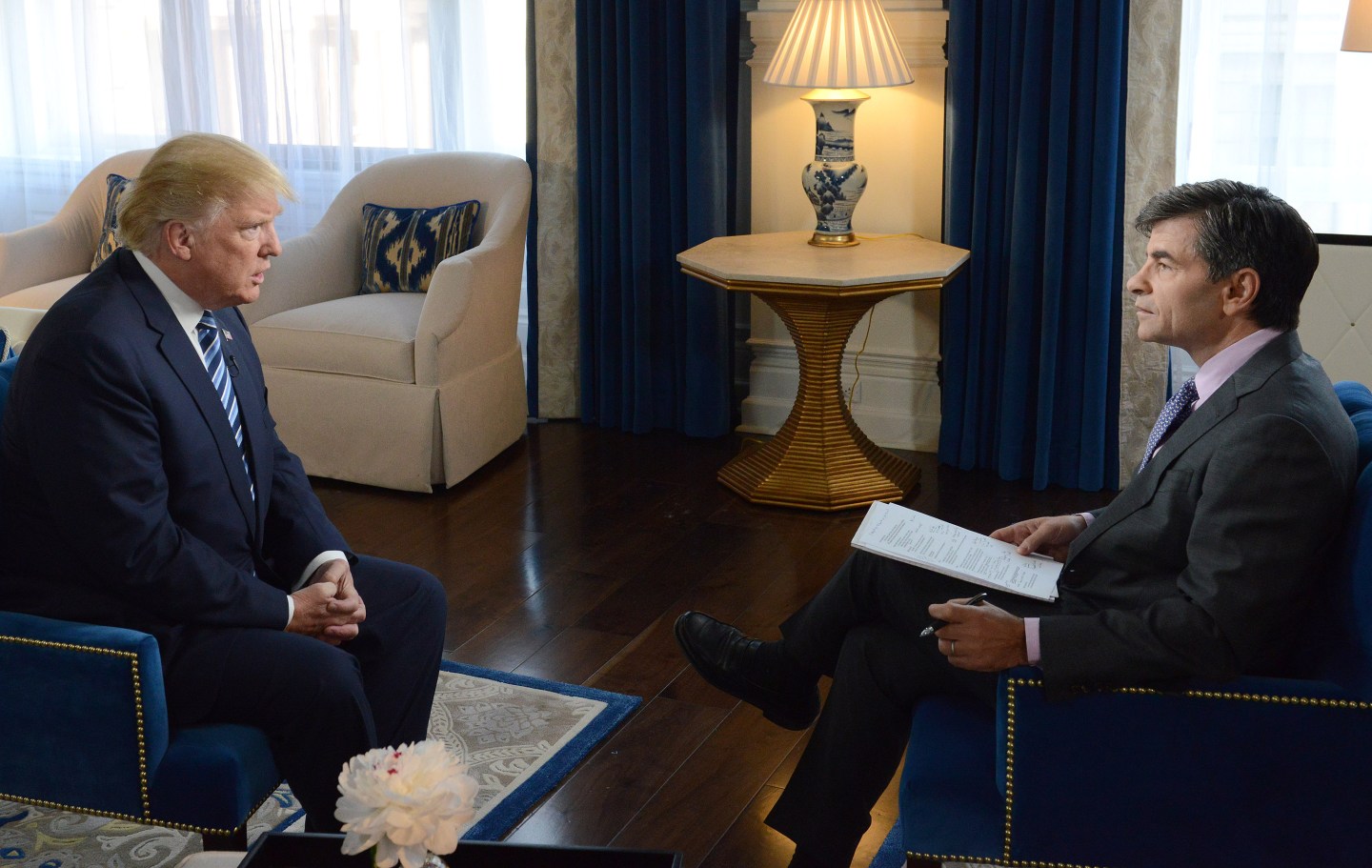 George Stephanopoulos interviews Republican presidential candidate Donald Trump in Washington D.C. on Wednesday, October 26, 2016.
Fred Watkins—Walt Disney Television via Getty Images
President Donald Trump said he’d want to hear damaging information about a political opponent in the 2020 election even if it were provided by a foreigner — a scenario that evokes some of the controversial conduct at the heart of Robert Mueller’s Russia investigation.“I think I’d take it,” the president said in an interview with ABC News’s George Stephanopoulos that aired Wednesday.

Asked whether he would accept information from foreigners or hand it over to the FBI, Trump said he thought that “maybe you do both.”

“I think you might want to listen, there isn’t anything wrong with listening,” he said, adding that if someone from a country like Norway offered information on his opponent, he would “want to hear it.”

On Thursday, Trump said in a pair of tweets that it’d be “ridiculous” to expect him to report all his conversations with foreigners to the FBI.

Trump’s comments come despite the years-long federal investigation into whether his campaign colluded with Russian agents to coordinate the release of damaging emails hacked from the Democratic National Committee and aides to former Democratic presidential candidate Hillary Clinton. Mueller found numerous Russian attempts to interfere in the 2016 election, but ultimately concluded there wasn’t enough evidence to establish that the president, or a member of his campaign, had conspired in those efforts.

In his report, Mueller explored whether a 2016 meeting in Trump Tower with Russians, which was arranged on the promise of dirt on Hillary Clinton, constituted an illegal act. Mueller concluded that there wasn’t enough evidence to charge participants — who included his son, Donald Trump Jr., and son-in-law Jared Kushner — with a crime.

Mueller also made clear that there was good reason to be concerned about opposition research coming from foreigners.

“A foreign entity that engaged in such research and provided resulting information to a campaign could exert a greater effect on an election, and a greater tendency to ingratiate the donor to the candidate, than a gift of money or tangible things of value,” Mueller wrote.

The president said those believing his aides and family members who were approached with offers of damaging information about Clinton should have contacted the FBI were naïve, and said lawmakers regularly collected “opposition research” on their opponents.

“Give me a break,” Trump said. “Life doesn’t work that way.”

After excerpts of the Stephanopoulos interview were released, House Judiciary Chairman Jerrold Nadler, who is leading an investigation of Trump in the aftermath of Mueller’s inquiry, said on Twitter that it’s “shocking to hear the President say outright that he is willing to put himself in debt to a foreign power.”

Senator Elizabeth Warren, a Democratic candidate for president, tweeted: “The #MuellerReport made it clear: A foreign government attacked our 2016 elections to support Trump, Trump welcomed that help, and Trump obstructed the investigation. Now, he said he’d do it all over again. It’s time to impeach Donald Trump.”

One of her rivals for the 2020 nomination, Senator Kamala Harris, wrote on Twitter: “China is listening. Russia is listening. North Korea is listening. Let’s speak the truth: this president is a national security threat.”

Harris, in an NPR interview posted earlier Wednesday, said that the Justice Department in a Harris administration would probably press obstruction of justice charges against Trump.

“There has to be accountability,” Harris told NPR. “Everyone should be held accountable, and the president is not above the law.”

In the ABC News interview, Trump intimated that the FBI didn’t have the resources to investigate possible foreign interference, and disputed the notion that foreign offers of assistance necessarily amounted to interference in U.S. election processes.

He added FBI Director Christopher Wray was “wrong” to say that the bureau would want to know about any foreign election meddling.

“The FBI director is wrong, because frankly it doesn’t happen like that in life,” Trump said. “Now maybe it will start happening, maybe today you’d think differently.”