The Eyes of the World Are Upon Some of Them: RaceAhead 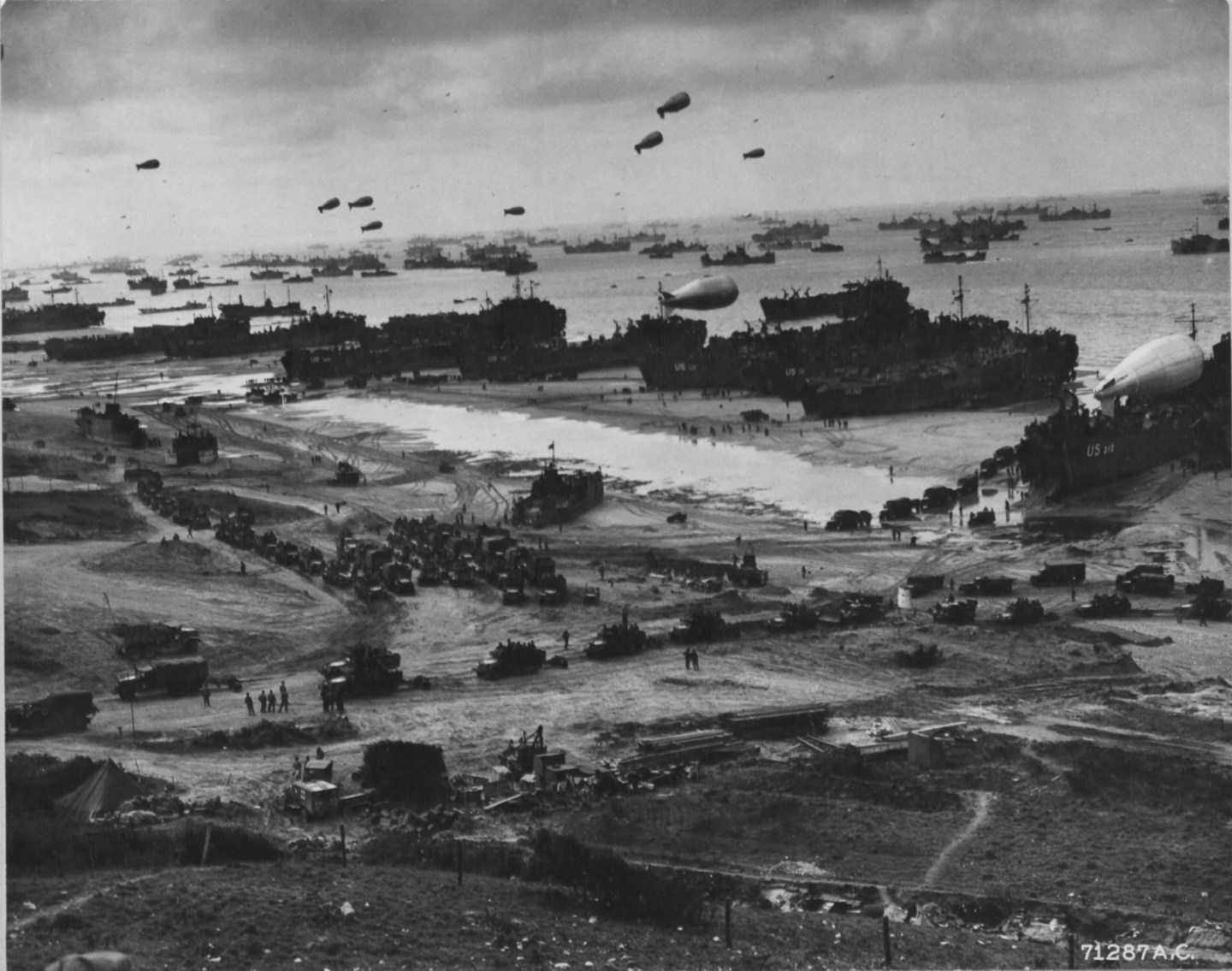 Barrage balloons protect dozens of ships on the Normandy beaches as they offload the men, material, and munitions needed to expand the beachhead. NARA 342-FH-3A17185-71287AC
Courtesy of The National Archives

President Trump, along with other world leaders and veterans of World War II, visited northern France to mark the 75th anniversary of D-Day. The veterans are now mostly in their 90s and have long been a welcome part of a solemn duty: The importance of remembering.

“When veterans started coming back here years ago, local people used to turn out to hug and kiss them,” a representative of Normandy Chapters, an organization which arranges visits for personnel who served in the Normandy area during World War II told the Los Angeles Times. “The feeling for the American and Allied troops here remains strong, very strong.”

The invasion of Normandy was a brutal business, the largest seaside invasion in history. It was a bloodbath for the U.S., as wave after wave of soldiers sacrificed their lives, sometimes just seconds after hitting the beach, to push the German defenders back on their heels.

Ernie Pyle, one of the greatest war correspondents in U.S. history, was on the scene the next day. In the absence of Instagram and social reporting, his careful dispatch was the only way the folks back home knew how bad things had been. “The advantages were all theirs,” he began. “Four men on shore for every three men we had approaching the shore.”:

Submerged tanks and overturned boats and burned trucks and shell-shattered jeeps and sad little personal belongings were strewn all over these bitter sands. That plus the bodies of soldiers lying in rows covered with blankets, the toes of their shoes sticking up in a line as though on drill. And other bodies, uncollected, still sprawling grotesquely in the sand or half hidden by the high grass beyond the beach.

Remembering is so important, which is why it’s important to remember everyone.

Though black men and women served throughout World War II, the only African American combat unit at D-Day was the 320th Barrage Balloon Battalion. Their mission was to raise a barrier of balloons – mini-blimps, really – into the sky to protect the ships, troops, and supplies from the constant aerial attacks by German aircraft. As the Smithsonian National Air and Space Museum notes, members of the 320th were among the first wave of troops to go ashore and were caught in the horror immediately. “Many of the balloons were shot up and destroyed before they could even be brought off the ships, and the soldiers of the 320th did what they could to survive.”

Eventually, they managed to deploy as many as 12 balloons by dawn on June 7. The steel cables they used to steer the balloons were a specific danger for dive-bombing planes, but the balloons backed a punch of their own.

“It was something like a canister bomb,” says William Garfield Dabney in this short but powerful video. “You’d pull the [balloon] right down into the wing of the [German] plane and BOOM it would blow up.”

As many as 2,000 African American troops landed on both Omaha and Utah beaches, but they appear in no Hollywood films or commemorative non-fiction pieces though, according to Linda Hervieux, the author of Forgotten: The Untold Story of D-Day Black Heroes, At Home and At War, you can see the balloons piloted by the men of the 320th in the distance in Saving Private Ryan.

Hervieux has become the historian of record for these troops and has been fighting valiantly every year for their recognition. (I do not say this lightly. If you have time, she breaks down the entire story in this extraordinary presentation at Claremont McKenna College in 2016.)

This year, she’s standing with Joann Woodson, the 90-year-old widow of Corporal Waverly “Woody” Woodson Jr., who was just a 21-year-old medic from West Philadelphia when he splashed his way onto Omaha Beach around 9 a.m. on June 6, 1944, only to be shot seconds later. From Hervieux’s latest essay:

Woodson was wounded, hit by burning shrapnel that raked his landing craft and ripped open his buttocks and thigh. The soldier next to him was killed. A medic slapped dressings on Woodson’s wounds, and they, along with three other medics in their crew, crept up the beach while crouched behind a tank. They were the first African-Americans to set their boots on Omaha Beach. For the next 30 hours, Woodson would survive German snipers and his own searing pain to save scores of lives. Decades later, Woodson would learn that he had been nominated for the Medal of Honor.

He’s never gotten it, even as previous administrations sought to belatedly remedy the many racist snubs from World War II.

Here’s what the black WWII veterans of the segregated military did get: A set of New Deal entitlements that fully accommodated Jim Crow racism, and a society that was so viciously bigoted, it was known to lynch black veterans, sometimes in uniform.

It’s a complicated history to remember, I’ll grant you that. But it’s worth getting it all right.

The great Ernie Pyle was shot and killed by a Japanese machine-gunner almost a year after D-Day, as he reported the fighting on a tiny island near Okinawa. Less than three weeks later, the war in Europe ended.

On this important anniversary, I give Mr. Pyle the last word, along with my deep respect:

“In this column I want to tell you what the opening of the second front [of the D-Day invasion] in this one sector entailed, so that you can know and appreciate and forever be humbly grateful to those both dead and alive who did it for you.”

YouTube finally announces ban on white supremacist videosIn an update to its (inconsistently enforced) hate speech rules, the platform announced it will prohibit “videos alleging that a group is superior in order to justify discrimination, segregation or exclusion based on qualities like age, gender, race, caste, religion, sexual orientation or veteran status.” YouTube has long been under criticism for its handling of harmful content, most recently, by Vox journalist Carlos Maza. Maza accused Steven Crowder, a YouTube personality, of targeting his sexual orientation. While YouTube originally stated Crowder wasn’t violating any policies, the platform backtracked on the decision, ultimately deciding to ban ads from Crowder’s channel. As Fortune’s Danielle Abril reports, YouTube's recent ban is “a move that comes 14 years after the site’s inception and hundreds of millions of videos have been posted.” Last year, around 160,000 videos were flagged for hate speech or political extremism, Abril writes, but less than 30 percent were removed from the platform.Fortune

I really didn’t know what segregation was like before I went into the Army…I think what God did with me […] was put me on a ship and send me around the world, and let me live in different environments and be in contact with different people and to really and truly find out what was behind it because I certainly didn’t know.Amzie Moore, World War II veteran from an all-black town in Mississippi