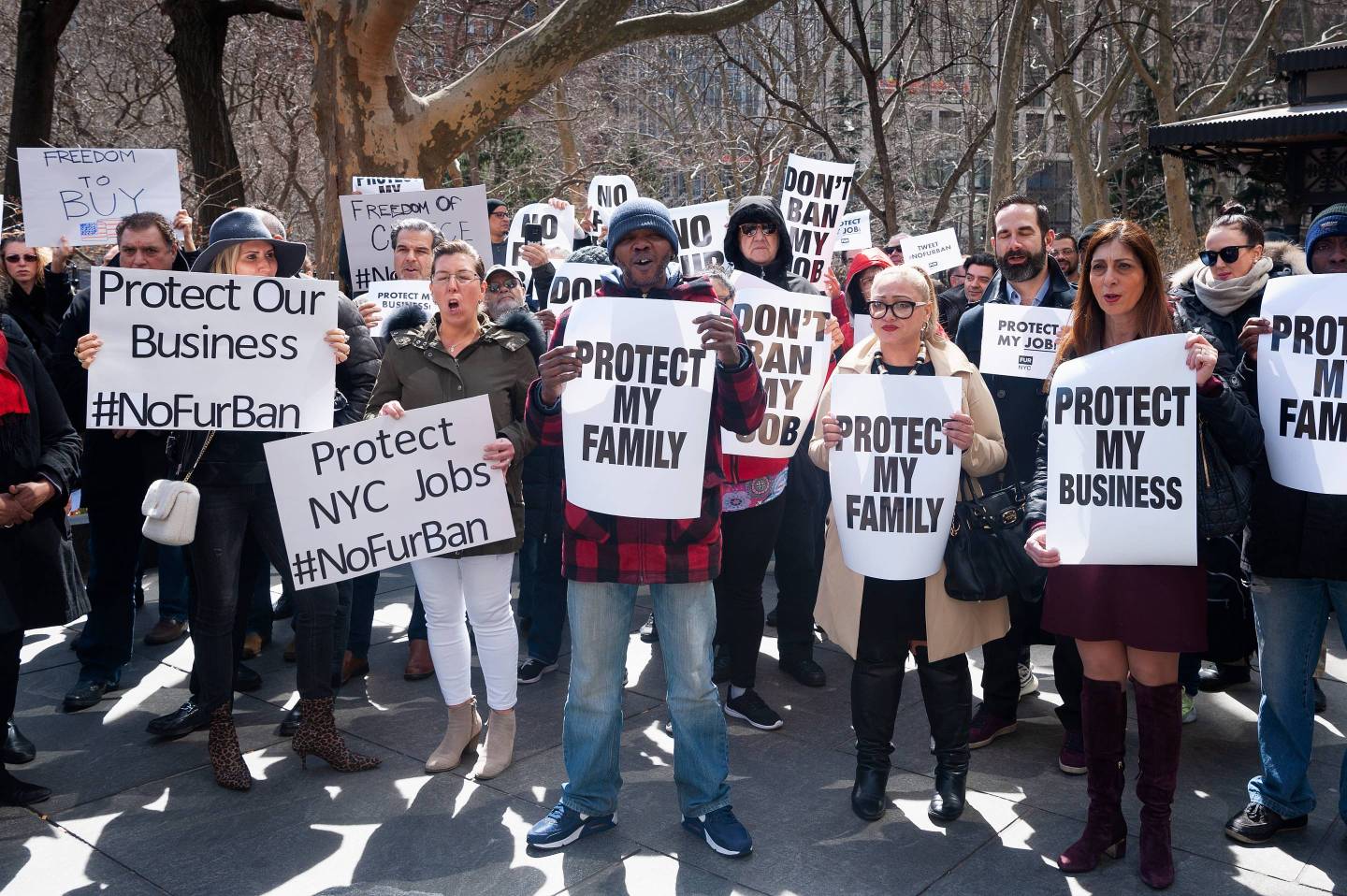 CITY HALL, NEW YORK, UNITED STATES - 2019/03/28: A coalition of fur store owners and fur trade employees gathered outside City Hall in New York City to protest the introduction of a bill that would prohibit the sale of fur apparel in New York City. A similar bill was introduced in the New York State Assembly which would ban the sale statewide. (Photo by Gabriele Holtermann Gorden/Pacific Press/LightRocket via Getty Images)
Pacific Press LightRocket via Getty Images

In New York, Mayor Bill de Blasio bashes the fur industry as inhumane and says he wants to ban it from the nation’s fashion capital. In Iowa, he’s courting support for his presidential run from Des Moines Mayor Frank Cownie, a powerful force in local politics whose family has run a fur business in the Great Plains for five generations.

During Iowa’s 2008 caucuses, Cownie became one of Barack Obama’s most prominent supporters, helping him beat Hillary Clinton in a field of eight candidates. The mayor of Iowa’s largest city could be a powerful ally for de Blasio by introducing him to scores of voters in the state that holds the first-in-the-nation presidential nominating contest in February.

Cownie, who won a fourth term in 2015 with 80% of the vote, is a climate change activist and a champion of social services and gun-safety laws. His activism for peace and the environment has won him United Nations recognition. Though he and de Blasio share many priorities, the fur issue may be a roadblock for Cownie.

“I asked him, ‘Do you know we’ve been in this business since 1888, and it’s clothing made from a renewable resource, not synthetics like plastic?”’ Cownie said. “He just laughed and said we should talk about it.”

De Blasio, 58, also may face trouble as he courts Iowa farmers extolling the state’s biofuel industry. Cownie, 71, agrees with the state’s Sierra Club that the industry depletes the state’s water and soil resources and pollutes its air and rivers.

After the event, Cownie tried to discuss the fur issue with de Blasio, but the New York mayor hurried off to an event in Sioux City, about 200 miles away.

Cownie’s family has been identified with the fur business for 131 years, at one time operating a sprawling factory in downtown Des Moines that manufactured fur garments for customers throughout the Great Plains, from Nebraska to Illinois. Cownie recalls visiting New York in the 1980s, when the city produced 80% of the nation’s fur coats.

Cownie sees irony in the mayor of New York’s push for the shutdown of an industry in a city that for decades was an international center for fur manufacturing and sales. Even now, a shut down of New York’s fur trade could cost the city economy at least $540 million and about 7,500 jobs in the industry and dependent businesses, according to an industry-funded study.

Jobs and economic impact are the reasons de Blasio cited as the rationale to extol Iowa’s biofuel industry with a visit to an ethanol plant in Gowrie, Iowa, a town of about 1,000. The sprawling facility towers over the prairie landscape, employing just 46 people to produce 69 million gallons of ethanol from about 24 million bushels of locally-grown corn a year.

Iowa, with 42 corn-processing plants across the state, leads the nation in ethanol production, creating nearly 30% of all U.S. ethanol. It has a production capacity of more than 4.1 billion gallons a year, creating a market for more than 1.3 billion bushels of corn, of which about a third may be used for animal feed, according to the Iowa Corn Promotion Board.

De Blasio appeared at the plant with former Iowa Gov. Tom Vilsack, whom the mayor is also courting as a potential backer. Vilsack demurred on an endorsement, saying he was just welcoming de Blasio as he would any Democratic presidential hopeful. Vilsack, who served as agriculture secretary in former President Barack Obama’s administration, has been a staunch supporter of the industry, and de Blasio said he is, too.

In supporting the industry’s growth, the progressive mayor of New York disregarded the concerns of environmentalist Cownie, who worries about ethanol plant wastewater polluting the Des Moines River, along with the Iowa chapter of the Sierra Club. Aside from water and air pollution, production requires four gallons of water for each ethanol gallon, risking depletion of the state’s aquifers, according to a club policy statement.

While steadfastly disagreeing with de Blasio’s bashing of the fur industry at home and praise for biofuels in Iowa, Cownie is not ready to walk away from his working relationship with the mayor of New York. Cownie says he’s still looking forward to that conversation de Blasio promised, while in the meantime expressing an understanding for the political pressures that sometimes inform a candidate’s policy positions.

“Everybody’s gotta do what he’s gotta do,” Cownie said.

—These are the U.S. states that passed “heartbeat bills”