There’s One Subject in the U.K. That’s as Toxic as Brexit. Trump Just Waded Into It 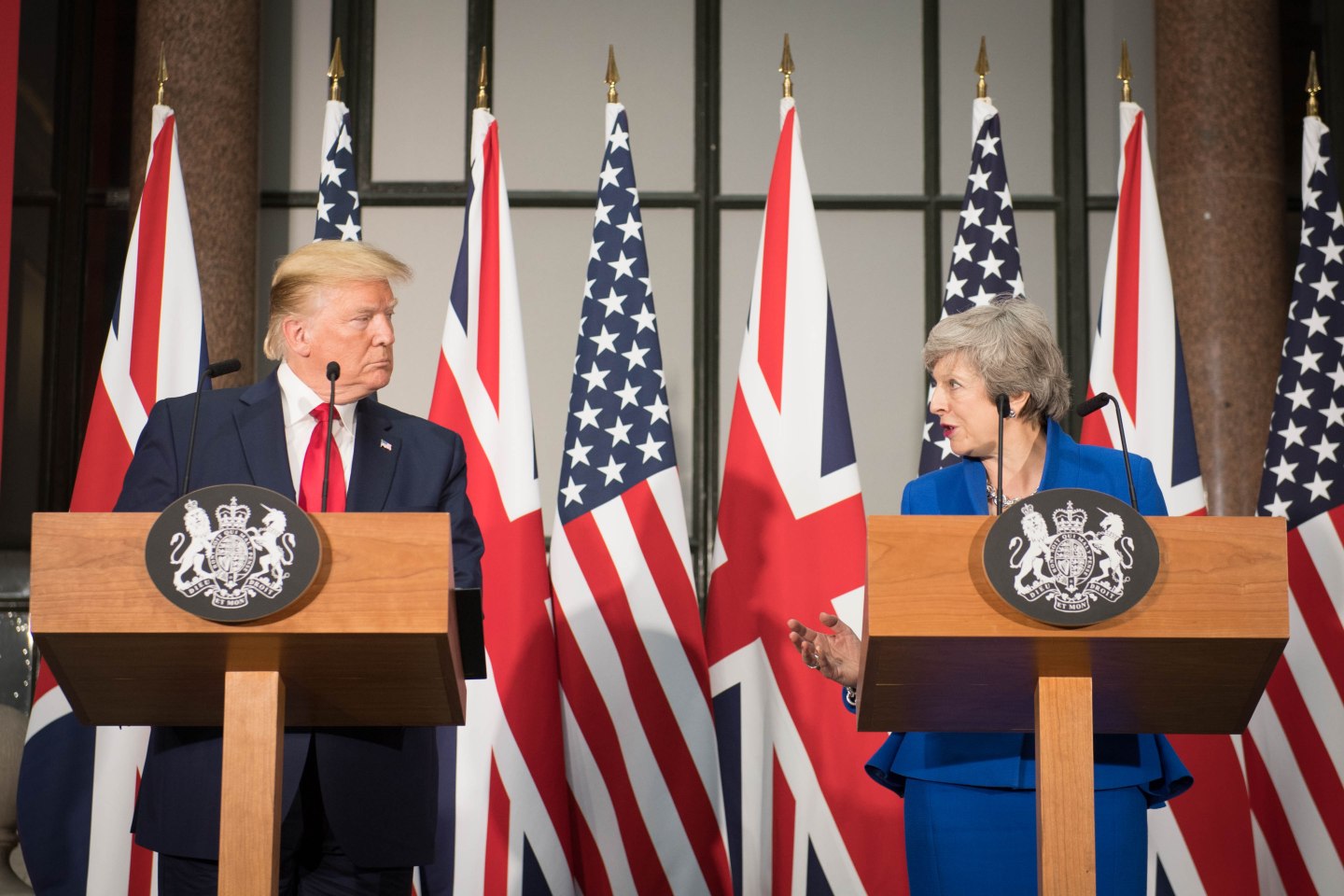 Once, advocates of the U.K.’s departure from the European Union argued that Brexit would mean more government funding for the country’s National Health Service, or NHS.

Now, President Donald Trump has confirmed the opposite: in trade talks between the U.S. and U.K., which will take place once Brexit has gone into effect, the U.S. wants the U.K. to open up the cherished British public health system to American companies.

“I think everything with a trade deal is on the table… NHS and anything else, a lot more than that,” Trump said at a joint press conference with Prime Minister Theresa May on Tuesday, on the second day of his state visit.

The president was responding to a question about whether he agreed with the U.S ambassador to the U.K., Woody Johnson, who said Sunday that he assumed the NHS “would be on the table” in the imminent trade talks, as the negotiations would account for the entire British economy. And his response has already elicited fury among leading politicians from across the British political spectrum.

Government spending on the NHS accounts for more than 7% of the U.K.’s GDP. The public nature of the NHS, which has been free to use for seven decades, is practically seen as sacred in the U.K., and attempts to change that status are politically toxic. A degree of privatization has been taking place in recent years, but NHS bosses want to reverse the process by squeezing out local for-profit contractors such as Virgin Care and Care U.K.

Further opening up the NHS to American contractors would therefore be an explosive political development. The U.S. ambassador’s comment prompted British Health Secretary Matt Hancock—one of the contenders for May’s job, as she is about to step down—to defend the health service in unequivocal terms.

“My American friends, know this: The NHS is not for sale,” Hancock said. “Yes, we’d love to make it cheaper to buy your life-saving pharmaceuticals—but the NHS will not be on the table in any future trade talks.”

Now Trump has insisted that the NHS will be on the table after all.

“The point of making trade deals is both sides negotiate,” May added nervously from her podium, following the president’s intervention. But it is hard to see how the U.K., as the much smaller negotiating party in this potential deal, would have the heft to push back.

Currently, it is not possible for the U.K. to enter bilateral trade negotiations with the U.S. or any other country, because members of the EU can only negotiate trade deals as a bloc. If the U.K. were to stay in some sort of customs union with the EU after Brexit, that would also cancel its ability to make its own trade deals.

So the quickest way for the U.K. to be able to independently negotiate trade deals would be for it to make a clean break with the EU as part of a “no-deal Brexit” when the Brexit deadline arrives on Oct. 31. As Trump put it in a Monday tweet, a deal with the U.S. would only be possible once the U.K. “gets rid of the shackles.”

….Fake News will be working hard to find them. Great love all around. Also, big Trade Deal is possible once U.K. gets rid of the shackles. Already starting to talk!

However, negotiating as part of the EU whole is a relatively strong position to be in, as the EU has a GDP of almost $19 trillion—not far off the U.S.’s $21 trillion. The U.K.’s solo GDP is only somewhere around the $3 trillion mark. Nonetheless, Brexit advocates have long argued that the ability to strike independent trade deals is a positive thing for the country.

The same people, notably former foreign secretary Boris Johnson—now the leading contender for May’s job—claimed during the referendum campaign that Brexit would free up an extra £350 million ($444 million) per week for NHS funding, as that sum is currently being paid into EU coffers. The claim was false, overstating the figure being paid to the EU by more than a third, and Johnson is as a result being sued in a crowdfunded private prosecution that alleges misconduct in public office.

“I think that [Brexit] will happen and probably should happen,” Trump said at Tuesday’s press conference. “I believe the prime minister has brought it to a very good point where something will take place in the not too distant future. I think she’s done a good job.”

May’s premiership is ending because she was unable to deliver Brexit, as she had promised to do. She negotiated a Brexit deal with the EU, but was repeatedly unable to get a majority of lawmakers to pass it in Parliament. In the recent European Parliament elections, May’s Conservative Party gathered up a miserable 9% of British votes.

In fact, there is no majority for any outcome: May’s deal, a no-deal Brexit and a fresh referendum on the matter have all been rejected by members of Parliament.

The British populace is also heavily split on what should happen next, with polls indicating heavy support for both the Brexit Party—a self-explanatory entity that’s only a few months old—and the Liberal Democrats, which had been seen as a spent force until they became the only large party to definitively oppose Brexit.

The opposition Labour Party, which is ambivalent on Brexit but has made much political capital out of staunchly defending the NHS, enthusiastically jumped on Trump’s reference to the subject. As the socialist party leader Jeremy Corbyn tweeted, the Conservative leadership contenders and Trump “need to understand [that] our NHS is not for sale.”

Theresa May stood next to @realDonaldTrump as he said the NHS will be "on the table" in a US trade deal. And that’s what Tory leadership contenders and Farage are lining up for the No Deal disaster capitalism plans they have.

They all need to understand: our NHS is not for sale.

He wasn’t the only one. Various contenders for the Conservative Party leadership (including Hancock, again) also echoed pretty much the same phrase.

I want to see the UK get fair deals on trade with the US and many other countries when we leave the EU. But the NHS is not for sale to any country and never would be if I was Prime Minister.

Dear Mr President. The NHS isn’t on the table in trade talks – and never will be. Not on my watch.

Let me state unambiguously that the NHS should not be used as a bargaining chip in any future trade talks.

But what if there is a fresh general election, as Corbyn wants, and the Labour leader becomes the new prime minister?

“I don’t know Jeremy Corbyn,” Trump said in response to a question about the prospect of negotiating a trade deal with him. “He wanted to meet today or tomorrow and I decided that I would not do that.”

Interestingly, Trump did want to meet with Boris Johnson during his state visit to the U.K., but Johnson—perhaps conscious of Trump’s widespread unpopularity in the country—turned him down. Given what Trump said Tuesday afternoon, and given Johnson’s own history of singeing his fingers on the political live rail that is the NHS, the Conservative leadership frontrunner must be very glad that he made that call.