Some Think the Fed May Be Employing a Special “Donald Discount” 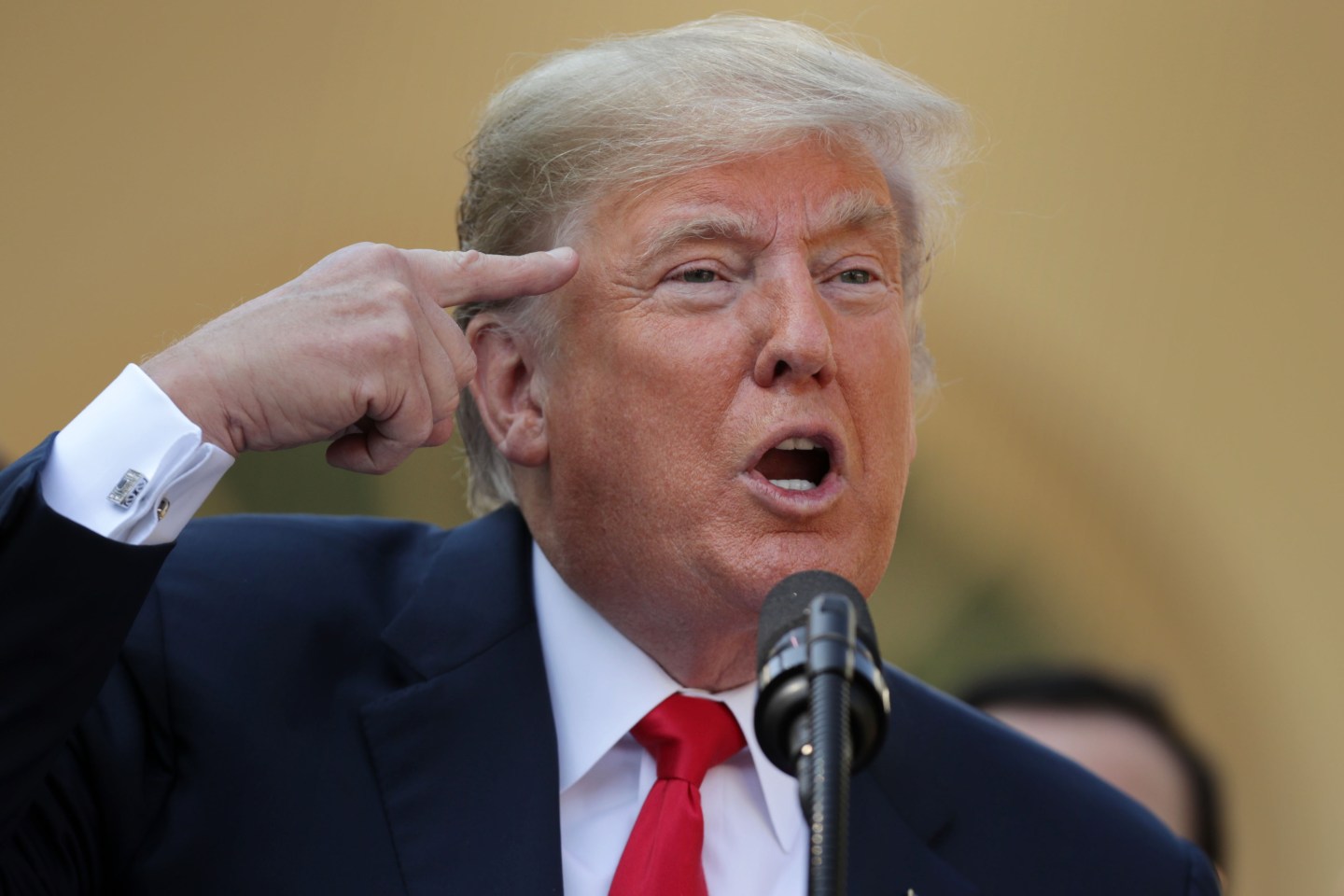 WASHINGTON, DC - OCTOBER 01: U.S. President Donald Trump calls journalists 'loco,' which is Spanish for crazy, during a press conference to discuss a revised U.S. trade agreement with Mexico and Canada in the Rose Garden of the White House on October 1, 2018 in Washington, DC. U.S. and Canadian officials announced late Sunday night that a new deal, named the 'U.S.-Mexico-Canada Agreement,' or USMCA, had been reached to replace the 24-year-old North American Free Trade Agreement. (Photo by Chip Somodevilla/Getty Images)
Chip Somodevilla—Getty Images

Is the Federal Reserve granting Donald Trump Drug a special, preferential interest rate because its governors regard our President as a loose canon?

When Trump was battling for the Republican nomination in 2016, I interviewed a former top executive from his long-defunct gaming enterprise, Trump Hotels & Casino Resorts, to get an up-front look at the candidate’s business practices. The manager, a big Trump admirer, noted that a constant ritual involved the Trump attorneys’ journeying to Trump Tower to persuade their client to pay past-due legal bills. Say the invoice documented $500,000 in services rendered. The Donald would initially bombard the lawyers salvos like, “What the hell is this inflated bill, it’s fiction, what you did for me isn’t worth a fraction of half a million!” Trump’s star power was such that after half an hour of volleys that gradually warmed from furious to friendly, he’d get the lawyers to accept half of what they’d billed, and treat them to a celebrity photo-op that he––and apparently the lawyers––considered part of their compensation. According the the exec, Trump regularly got those gigantic discounts, but somehow left the victims smiling.

Is it possible that the Federal Reserve is now effectively handing Trump another special discount? A few money managers and economists I’ve spoken to––none of whom want to be identified––speculate that Fed Chairman Jay Powell, as well as other Fed Governors, may consider Trump’s policies so erratic and unpredictable that they need to hold the Fed Funds rate below where the fundamentals would typically dictate to provide a buffer for the growing sense of uncertainty he’s spreading.

The rationale would be that the market increasingly may demand an extra cushion on what investors can garner from risky vs. safe assets because Trump next move is so unforeseeable, and potentially dangerous. Does Trump really want a deal with China? Or will he welcome a trade war? Saber-rattling about an attack may scare the Iranians, but it spooks Wall Street as well.

The Fed possesses the power to soften how much Trump’s careening course might hammer stock and other asset prices. So let’s spell out what might plausibly be the Fed’s Trump discount in wonkish numbers.

Ready to do the math? It goes something like this. The value of equities, commercial buildings and other income-producing holdings depends heavily on the “discount rate” applied to the streams of future income they provide. The lower the discount rate, the pricier the stock, mall or apartment complex. For equities, the discount rate consists of two building blocks. The first is the risk-free “real,” or inflation-adjusted, interest rate. That’s what you’d get from short-term government bonds that will deliver a guaranteed dollar return no matter what surprises Trump delivers, minus the expected rate of inflation. For the risk free rate on stocks, a standard measure is the 3-month treasury bill yield, now standing at 2.4%. Since the Fed sees inflation running at around 2%, the “real yield,” the crucial number, is .4% (that 2.4% minus 2% lost to inflation).

The second building block the what’s called the “equity risk premium.” That’s the extra margin investors demand for holding relatively volatile equities as opposed to super-safe treasuries. Today, the price-to-earnings multiple on the S&P 500 stands at 20.9, meaning that the expected future return, once again, adjusted for inflation, on a basket of those stocks is the inverse of the PE, or 4.8%. (The S&P 500 average earnings-per-share over the last four quarters of $135, divided into the index value of 2826, is 4.8%.) Hence, the equity risk premium is that 4.8% minus the .4% inflation-adjusted yield on the 3-year treasury or 4.4%.

The size of the equity risk premium represents the buffer investors can count on to absorb shocks to equity prices from, say, the conviction that a trade war may last a long time, or the sudden onset of a recession. Today’s 4.4% ERP is somewhat high by historical standards, so investors are getting a pretty good margin for safety. When the ERP is high, stock prices are usually on the low side. That that’s not the case today. Even with an elevated 4.4% risk premium, the overall discount rate that supports stock prices is only 4.8%. What’s protecting investors, and holding stocks at an expensive almost 21 times earnings, is that bargain “real” rate engineered by the Fed.

Right now, the Fed forecasts real economic growth at 2%. So it wouldn’t be unusual for the Fed to set the inflation-adjusted Fed Funds rate near the expected growth rate of the economy––at 2%. But as we’ve seen, it’s holding that benchmark at a remarkably slender .4%. Those unorthodox numbers make it indeed conceivable the Fed is setting rates unusually low, say by one point or even more, to offset a possible jump in the other component of the discount rate, the equity risk premium, that investors may soon demand if and when they “wake up” to the increasing odds that Trump will veer into such dangerous territory as hard-core protectionism.

Let’s say the probability of a trade war greatly increases, a trend that’s already underway. Investors might demand one percent more of future return to compensate for the possibility of a tariff-induced hit to profits. That would raise the equity risk premium from 4.4% to 5.4%, and the discount rate from 4.8% to 5.8% (the .4% real risk free rate plus the new 5.4% risk premium). In other words, investors would want a much bigger margin of safety for holding stocks, and to get it, they’d bid down prices. That one-point increase would lower the PE to 17.2, and cause the S&P to fall 18%.

That’s a big drop. But imagine the damage if the Fed hadn’t already provided a big buffer by setting real rates at .4% instead of a point higher, and even that level would be low in a 2% real growth economy. If the Fed hadn’t provided that hypothetical 1% Trump discount, the discount rate in our scenario where investors start freaking out would go to 6.8% (a 1.4% real rate plus the one-point-higher equity risk premium of 5.4%). In that outcome, the S&P would have a PE under 15, and stand at 2000, 29% below today’s level.

We don’t know if the Fed is really providing Trump with a “Loose Canon” discount. But we do know that by holding rates unusually low it will keep asset prices a lot higher than where they’d go if investors growing fears were the highly dominant force driving the market. As we know, Trump’s been demanding his special discount by browbeating the Fed the way he browbeat his lawyers in the old days.

And once again, he’s getting what he wants––this time he doesn’t even need to provide a photo op.

—The winners and losers in a $1 trillion buyback year