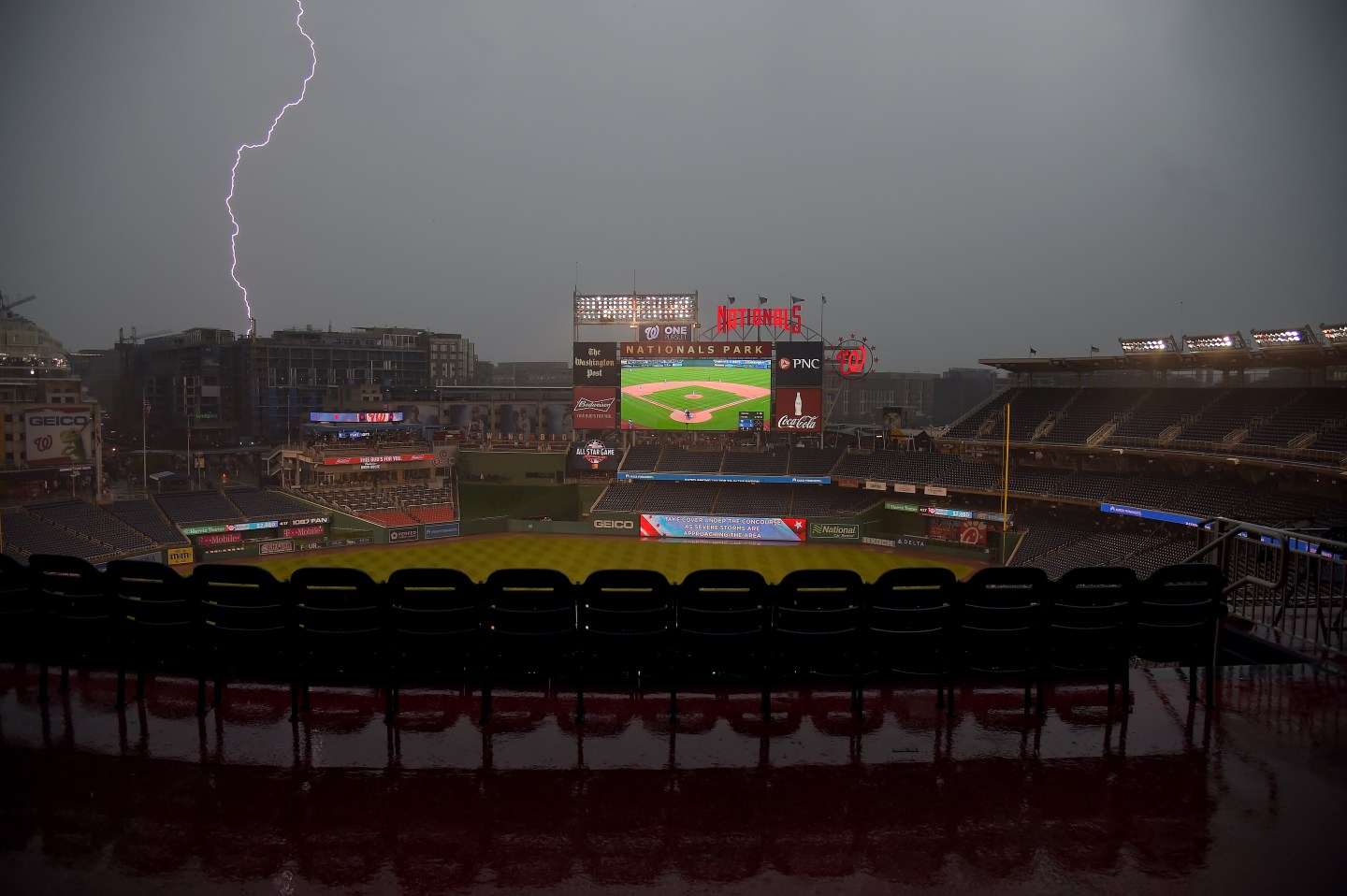 WASHINGTON, DC - MAY 02: Lightning strikes during a rain delay prior to the start of the game between the Washington Nationals and the St. Louis Cardinals at Nationals Park on May 2, 2019 in Washington, DC. (Photo by Will Newton/Getty Images)
Will Newton Getty Images

Aaron in for Adam this morning. You’ve no doubt heard about the “Internet of Things”—maybe you’ve even heard too much—but Shimon Elkabetz wants you to start thinking about the “Weather of Things.”

Elkabetz came to Cambridge, Mass. in 2015 to get an MBA at Harvard Business School. But he also reconnected with two buddies from back home, Rei Goffer and Itai Zlotnik, who had similar ideas about improving forecasting (both were across town getting their MBAs from MIT).

The trio co-founded Climacell with the aim of revolutionizing the industry by collecting data from all those disparate devices rather than relying on readings from the standard weather network. While there are about 12,000 data collecting stations and radars in the standard global weather forecasting network, Climacell gets data from close to 600 million individual reporting devices.

The CEO says the much more granular and detailed data, along with proprietary prediction algorithms, makes his company’s forecasts more accurate and useful than those from competitors like AccuWeather or IBM’s The Weather Co.

AccuWeather declined to comment on Climacell, but noted it was deemed the most accurate by third-party researcher ForecastWatch. “AccuWeather prides itself on our superior level of accuracy,” the company said in a statement. “This achievement, confirmed by an independent, third-party verification service, gives credence to our customers and users.”

The Weather Co. said it was starting to incorporate data similar to that used by Climacell. “The Weather Company has been named the world’s most accurate forecaster since 2010,” the company said in a statement. “Earlier this year, we announced IBM GRAF, a new global weather system that will provide nearly 200% improvement in forecasting resolution for the world, using crowdsourced data from millions of sensors worldwide and in-flight data.”

The day I visited Climacell was bright and sunny–boring from a weather forecasting perspective. So in his demonstrations, Elkabetz zoomed Climacell’s software around the world, at one point showing the temperature and wind speed at individual utility substations in California with a model to predict wildfire risk.

The main play for Climacell is to pitch big industries like utilities, shipping, agriculture, and retail that need accurate weather forecasts to survive. The company’s customers already include airlines like JetBlue and Delta, as well as the U.S. Open tennis tournament. But the company has also designed a consumer app for phones, allowing anyone to take advantage of the company’s more detailed forecasts. The app is in limited distribution but you can sign up to try it here.

Entrepreneurs have increasingly moved into sectors that were once the sole province of governments. Think of Elon Musk’s SpaceX or intelligence collector Palantir. Elkabetz argues weather is the next frontier. “It hasn’t happened, but it will happen–it has to happen,” he says. “It’s the nature of innovation.”

Climacell is still just an upstart startup, however. Today is also the day when Fortune publishes our annual Fortune 500 list. And tech is well represented in 2019, from third-ranked Apple all the way to ON Semiconductor at number 485.

(Update: This story was updated on May 17 with a comment from The Weather Co.)

When the world must come together as one. At a summit in Paris on Wednesday, Google, Facebook and Twitter pledged to "curb the uploading, promotion, amplification and distribution of violent extremism on social media platforms." French President Emmanuel Macron and New Zealand Prime Minister Jacinda Ardern led the initiative being called the "Christchurch Call." The United States abstained from backing the effort. Instead, the White House launched a web site to encourage people to report alleged political bias from social media service takedowns.

The great loophole of China. Though Facebook is barred from operating directly in China, it is considering taking minority stakes in local tech companies, Breakingviews reports. The move would be similar to Yahoo co-founder Jerry Yang's decision to make an early investment in Alibaba, the site noted.

One rich idiot. The Oracle of Omaha has sold out of IBM, but now loves Seattle's e-commerce finest. Warren Buffett's Berkshire Hathaway disclosed that it owned $900 million worth of Amazon shares at the end of the first quarter. Buffett admitted on CNBC recently "I’ve been an idiot for not buying” sooner. Elsewhere on Wall Street, Cisco Systems reported revenue increased 4% in its most recent quarter to almost $13 billion, better than analysts expected. Cisco shares, already up 23% this year, gained 4% in premarket trading on Thursday.

Blown away. Speaking of Amazon, Elon Musk was unable to get the jump on Jeff Bezos last night in the Internet space race. High winds forced Musk's SpaceX to postpone a planned launch of 60 satellites, a tiny opening portion of the thousands needed to create the company's Starlink celestial broadband service.

Press one to hear more. The Federal Communications Commission will consider a rule next month to give wireless carriers more power to block unwanted calls. FCC chair Ajit Pai said the plan would let the carriers block robocalls "by default."

I don't often read something that so deeply matches my inner sense of truth and beauty than Richard Schiffman's New York Times article about the trend towards "junk playgrounds." Instead of see-saws, slides and swings, a massive new playground on Governors Island in New York City has old tires, a broken piano, and a bunch of other junk that would be at home in Oscar the Grouch's trash can. The article is a must-read microcosm about everything that's right–and wrong–with childrearing in America in the 21st Century:

Meghan Talarowski, the founder of a playground research and design organization, Studio Ludo, in Philadelphia, conducted a study that compared playgrounds in London and in American cities. The British playgrounds typically had less fixed play equipment than their American counterparts, and more seemingly hazardous design elements, like climbing structures and tree houses. Ms. Talarowski found that children were more physically active and remained in the British playgrounds longer than in American ones. And surprisingly, given the potential for risky play, there were fewer injuries in the London playgrounds than in those in the United States. “The best playgrounds look dangerous but are completely safe,” Ms. Talarowski said.

Commentary: Why A.I. Just Might Save Your Job By Munir Mandviwalla and Niraj Patel

'Zombieload' Flaw Lets Hackers Crack Almost Every Intel Chip Back to 2011. Why's It Being Downplayed? By Alyssa Newcomb

The trailer for season 5 of the super-creepy and hits-too-close-to-home show Black Mirror is out. The three new episodes will hit Netflix on June 5 with stars including Miley Cyrus and Topher Grace. Just don't watch it home alone at night.