Why Newt Gingrich Has Been Complimenting High-Level Democrats 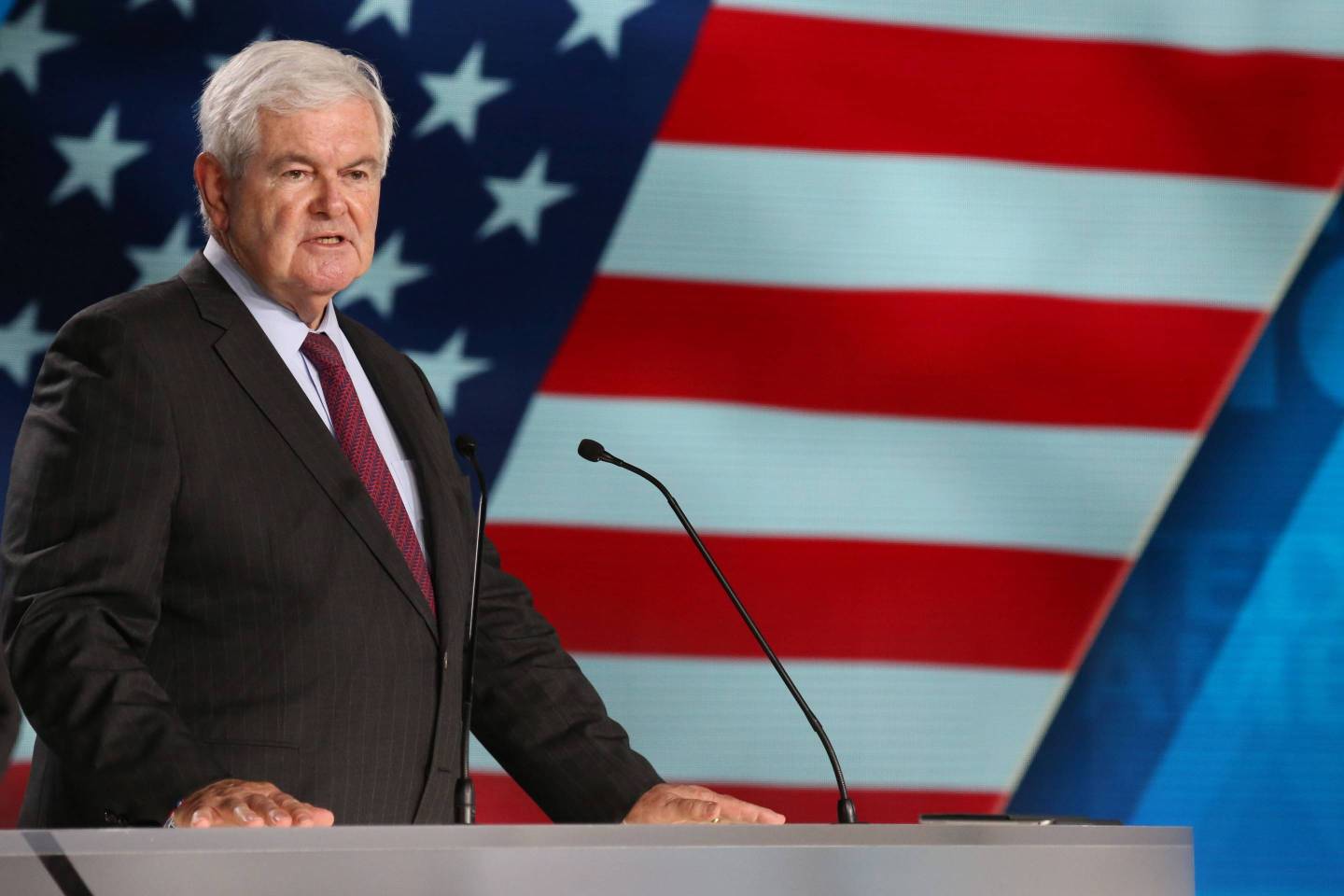 Whether it was the result of a full moon or just an anomaly, former House Speaker Newt Gingrich has been dropping compliments about high-level Democrats, and political observers have opposing theories as to why.

During television rounds to promote his new novel, Collusion, the 75-year-old Republican has certainly delivered the expected comments—such as praising Confederate commander Robert E. Lee as a “great general” during an appearance on TV’s The View—but shared some uncharacteristic observations, too.

Gingrich said during an appearance on CBSN that U.S. Sen. Kamala Harris (D-Calif.) is likely to win the Democratic presidential nomination, and he called her “likable” and “articulate.” “I think that she represents a new generation in a way that Biden and Bernie Sanders are going to work very hard to be able to match,” he said.

During an interview with CBS This Morning, he said House Speaker Nancy Pelosi (D-Calif.) did “exactly the right thing” in not immediately pushing toward impeachment of President Trump after the release last month of the report by special counsel Robert Mueller. The report concluded that Russia made efforts to get Trump elected and that Trump tried to influence the Mueller probe.

Gingrich took to Twitter to praise Democratic White House hopeful and South Bend, Ind., Mayor Pete Buttigieg, the first presidential candidate in a same-sex marriage. “Republicans should start paying attention to Mayor Pete Buttigieg,” Gingrich tweeted. “He may be the unknown outsider who grows into authenticity.”

The Kamala Harris campaign did not respond to requests for comment on any of this, and neither did staffers in Pelosi’s office. Representatives for Buttigieg’s campaign said they would pass on discussing Gingrich’s comments. Even staffers with Gingrich’s production company, Gingrich360 in Arlington, Va., said their boss was out of the country and that he does not have a spokesperson.

But one political observer suggested that perhaps Gingrich was trying to indirectly throw shade against Democratic frontrunner Joe Biden in complimenting at least two of his Democratic White House competitors. On Thursday, the Monmouth University Polling Institute released a survey that placed Biden as the clear frontrunner in the Democratic race, with 36%, followed by Vermont U.S. Sen. Bernie Sanders with 18%, Buttigieg with 9%, Massachusetts U.S. Sen. Elizabeth Warren with 8%, and Harris with 6%.

“The 2020 Democratic race I think is wide open and Joe Biden by any stretch is the hands-on favorite right now,” said Sophia Nelson, former GOP counsel to the House Committee on Oversight and Reform. “He’s at the top of all the polls, he’s raising tons of money, he’s got this secret weapon called Barack Obama that he’s got in the wings should he need to use him. He’s well liked in the black community.”

Nelson, a Republican turned conservative Independent, continued, “I think Biden is the one they fear the most so maybe they’re trying to spin things that maybe (other Democrats) are better candidates.”

Gingrich is a former history professor who served in the U.S. House from 1979 to 1999. He was GOP speaker of the House the last four of those years. When Republicans took over control both chambers of Congress in a landslide in 1994, Gingrich became the face of what the GOP wanted. He faced off with former President Clinton on welfare reform and government funding, and led the drive to investigate the former president, leading to his impeachment.

But pollster and strategic consultant Ron Lester says that showing some courtesy toward the other major political party might not be all that out-of-character for Gingrich. The former House Speaker once reviled by Democrats for co-authoring the 1994 Contract with America, a creed that touted lower taxes and welfare reform, is not always as partisan as people believe, Lester said.

During the years that he served in the U.S. House, he would talk up an organization that promoted capitalism and included people from all walks of life, the strategist continued.

And while Gingrich is known for conservative politics, he’s always separated himself from the more heavily criticized actions of the Republican party, Lester said. One example of that, according to Lester, is the racially charged ad campaign in support of George H.W. Bush featuring Willie Horton. The black convict raped a woman and stabbed her fiancé while on AWOL from furlough.

“He’s always managed to separate himself,” Lester said of Gingrich. “It’s really the Jack Kemp school of politics,” the strategist said of the late Republican housing secretary with a reputation for progressive politics.

Where Pelosi is concerned, people in the political arena sometimes have to stop and admire her for her savvy, no matter their party, Lester said, calling her one of the most effective speakers the country has had this century. This might explain Gingrich’s praise for her, he added.

“I think people really like to see a real sharp, effective person in action,” Lester explained. “Those of us who are in politics, people like Newt, I think that they respect the game, and Nancy Pelosi often rises above the partisanship in American politics and says something or makes a move that people on their other side have to say is brilliant.”

Gingrich agreed with Pelosi that pushing toward impeachment would not advance the interests of the country, Lester said.

“He’s one of the few political figures that we have that sometimes just is able to transcend partisanship and sometimes touch something in a lot of people,” he said.

—These are the U.S. goods affected by the China tariffs