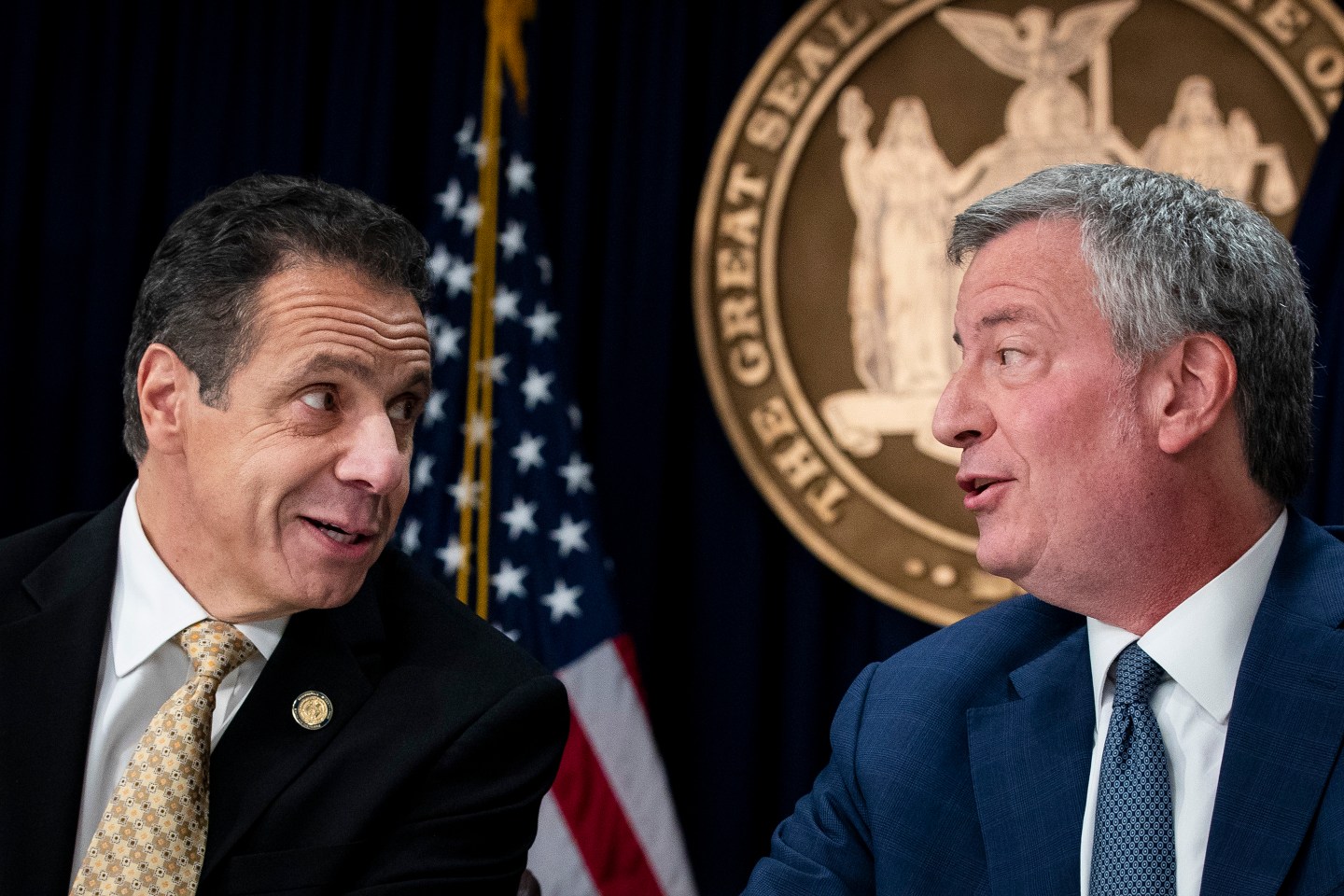 (L-R) New York Governor Andrew Cuomo and New York City Mayor Bill de Blasio talk with each other during a press conference to discuss Amazon's decision to bring a new corporate location to New York City, November 13, 2018 in New York City. Amazon announced earlier in the day that it has chosen Arlington, Virginia and Long Island City in Queens as the two locations, which will both serve as additional headquarters for the company. Amazon says each location will create 25,000 jobs. (Photo by Drew Angerer/Getty Images)
Drew Angerer—Getty Images

The largest city in the United States could become a factor in what promises to be a dramatic presidential race.

For months, the possibility has loomed that the mayor of New York City and the governor of the state might both vie for the 2020 Democratic nomination for the White House. Mayor Bill de Blasio indicated Monday that he is continuing to figure out whether he will seek a presidential run, and Governor Andrew Cuomo, though he has voiced support for frontrunner Joe Biden, has not officially ruled out a campaign.

No doubt, this possibility could make for some distractions when it comes to the day-to-day running of New York City or of the state capital in Albany. This is exacerbated by the fact that de Blasio, 57, and Cuomo, 61, share a rivalry almost as intense as that between late Gov. Nelson Rockefeller and late Mayor John Lindsay in the 1970s.

Some examples of their differences:

When Seattle-based Amazon in February pulled out of its plan to build secondary headquarters in Queens, a jilted de Blasio said the company “threw away” an opportunity to be a good neighbor with Big Apple residents, while Cuomo tried to cajole Amazon back, blaming progressives for the deal’s implosion.

As the city prepared to shut down a needed subway line for a year for repairs, Cuomo swooped in earlier this year with a proposed plan to keep the train running on modified hours (the train line is partially shutting down). Then, there is the war over the city’s troubled public housing. De Blasio and Cuomo for years argued over $450 million in state funds promised to the city’s Housing Authority, an agency under fire for crumbling walls, rats and other inhabitable conditions.

When asked what could happen if these two brought their disagreements to the national stage, political pundits chuckled. One expert jokingly asked if this piece would include an audio component to record all the sniping. And while the experts predicted both are not likely to be in the same race, neither de Blasio’s nor Cuomo’s offices would respond to queries from Fortune about their plans.

“I’m sure they could not stop themselves” from jabbing at one another, predicted professor Daniel DiSalvo, chair of the Department of Political Science at the City College of New York and senior fellow of the Manhattan Institute.

But both elected officials would need to hold their animosity at bay. While Cuomo has national name recognition, having been U.S. housing secretary under Bill Clinton from 1997 to 2001, de Blasio would need to play down his New York City activities, the professor said.

“New York City with many people does not always have the most savory reputation,” DiSalvo said. “Probably for de Blasio, he’s got to connect to voters who are not New Yorkers and show that he knows something about the rest of the country.”

De Blasio and Cuomo are following a long tradition of tensions between statehouses and city halls—and between Albany and New York City.

“No matter what the personalities and even the politics of the mayor and the governor, there is often conflict,” author and professor Douglas Muzzio of Baruch College said.

Rockefeller and Lindsay clashed over education, corrections, and rent control in the late 1960s and 1970s. Lindsay, who visited and conversed with inmates in New York City, criticized Rockefeller for refusing to meet with inmates and ordering state troopers to intercept the deadly prison riot in Attica, N.Y., in 1971. Late governor Mario Cuomo, father to the current governor, and former mayor David Dinkins clashed over frugality and spending.

“You go back in the state’s history … and it’s inherent; it’s structural,” added Muzzio, founder of Baruch College Survey Research.

Muzzio cited Dillon’s Rule, an academic concept that stipulates that no matter what, the state capital is in control—even when it comes to one of the most prominent cities in the world.

Professor Joseph Viteritti, chair of the Urban Policy and Planning Department at Hunter College and author of The Pragmatist: Bill de Blasio’s Quest to Save the Soul of New York, agreed.

“Mayors in cities like New York tend to be ambitious, tend to have large egos, and very often the state capital is not on board so it creates tensions, and sometimes there are tensions even among like-minded people,” he said.

Lindsay and Rockefeller, for instance, were both progressive Republicans at one time (until Lindsay transferred to the Democratic party), Viteritti said.

“Both had ambitions to run for president,” he continued. “It was real then. Here (with Cuomo and de Blasio), the issues are much more philosophical. One is a moderate and one is more progressive.”

Both have reputations for having strong personalities and sometimes struggle with likability, according to DiSalvo.

“De Blasio seems to think of himself as God’s gift to progressive politics, and Governor Cuomo likes to be in charge and likes to think he’s pretty smart too,” DiSalvo said. “He doesn’t take lightly criticism from the mayor.”

In some ways, the disagreements are unusual because both officials have lots in common.

Both were born in New York City and share Italian-American roots. As established officials, they worked in the same circles. De Blasio was a regional director for the U.S. Department of Housing and Urban Development when Cuomo was secretary under President Clinton. They both are strong on women’s rights, race issues, and LGBTQ rights. In fact, the late governor Mario Cuomo once said de Blasio reminded him of his own son.

“At one point, they were very close,” Viteritti said.

But then, they grew apart.

Cuomo, a candidate for state attorney general in 2005, did not endorse de Blasio, then a New York City Council member, in de Blasio’s bid to become council speaker. Cuomo also did not support a candidate in the 2013 Democratic primary for mayor of New York. In 2014, when De Blasio wanted to pay for a pre-kindergarten-for-all program with a tax on residents earning $500,000 or more, Cuomo attacked the idea and steamrolled over it with an agreement over the state budget in 2014 that would designate state funds for the program.

“There are very clear differences between them and they will tell you that,” Viteritti said. “Andrew Cuomo is a moderate centrist, very much along the Joe Biden lines, and Bill de Blasio is somebody who identifies with … the more progressive wing of the party that’s going to focus more on issues like income inequality.”

While it’s still not clear what could happen, de Blasio told NY1 television on Monday that he is continuing to decide whether he will run. Whatever the case might be, the mayor appears to be positioning himself as a candidate. De Blasio’s communications director, Mike Casca, recently left the City Hall staff to work for de Blasio’s Fairness Political Action Committee, and two other City Hall staffers are taking temporary leaves to work with the PAC too. In January, the mayor introduced a plan to guarantee health insurance for all New Yorkers. In recent months, he’s traveled to early primary states.

But a successful campaign would be a stretch, Muzzio said.

“I don’t see him as a viable candidate,” he said. “There’s something about Bill’s persona that puts people off or doesn’t excite them, so even though the policies are there, the connection, the resonance between a candidate and his or her voters, I don’t see it there. I don’t see hardcore Bill de Blasio support.”

“This is a big one for the New York City mayor to run for president,” Viteritti said.

“It’s a big leap, but then we have somebody who is mayor in Indiana running for president,” Viteritti added of South Bend, Ind., Mayor Pete Buttigieg. “Who’s to say what’s possible and not possible?”