Surprise Amazon Go Store Opening Causes New Yorkers to Do What They Do Best: Line Up 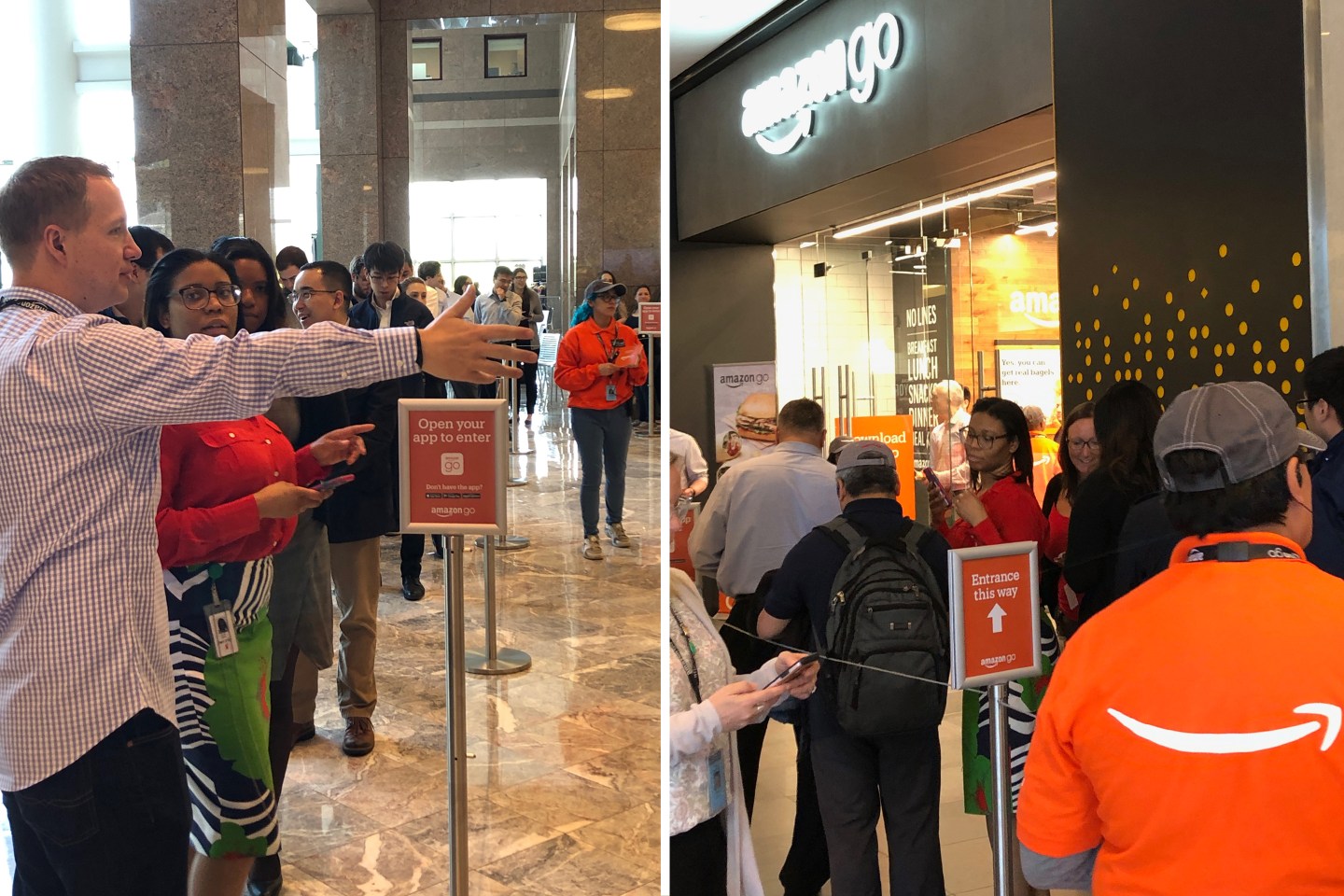 Amazon and New York City are friends again. Months after the retail giant quit the city in a huff over opposition to its planned corporate headquarters, an Amazon Go store quietly appeared in Manhattan at dawn on Tuesday morning.

New Yorkers greeted the arrival of the cashier-less store warmly, lining up to buy sandwiches, snacks and an assortment of local food items. By noon, the crowd was dozens deep as people clamored to enter the store 1300 square foot store, which proclaims “No Lines, No Checkout.”

I received a tour of the new store from a nervous PR agent who, true to Amazon’s culture of secrecy, insisted that anything she said was background information. It’s not like there was anything to hide.

Bon Jovi blared overhead as shoppers, who must scan an Amazon app to enter, plucked items from the shelves while overhead cameras tracked their activities. (A second PR agent told me Amazon does not like the word “track” but, well, that’s how the shop works.)

What about the food? A PR person said the chicken banh-mi sandwiches are a popular item, so I bagged two ($3.99 for a half sandwich) for my colleagues, who later pronounced them “tasty” and “better than Pret-a-Manger.” Otherwise, there were rows of salads, chips, sushi and bowls, nearly all of them priced under $10—not necessarily cheap, but a good deal given New York’s sky-high prices.

And, in a nod to local enterprise, the store, which is located in Brookfield Place mall near the World Trade Center, offered wares from several New York brands including Magnolia cupcakes, Hale & Hearty soups, and Ess-a-bagel.

Amazon Go stores, which have also opened in Chicago, Seattle, and San Francisco, have created a buzz in part because they rely entirely on an app rather than human cashiers. Shoppers can download a dedicated store app or else scroll to a section of the regular Amazon app, which allows them to enter the store and begin shopping. Upon leaving the app bills them, based on what the overhead cameras have seen them pick up, and sends a receipt.

While the New York store opening attracted a crush of curious, mostly younger shoppers, not everyone was impressed. Judy, a 50-something-year-old woman who worked in the American Express office overhead, said she didn’t find the store to be a big deal, but that her younger coworkers were ecstatic.

“All the millennials think this is the greatest thing ever,” she said. “One girl I’ve never seen smile in three years was literally jumping up and down.”