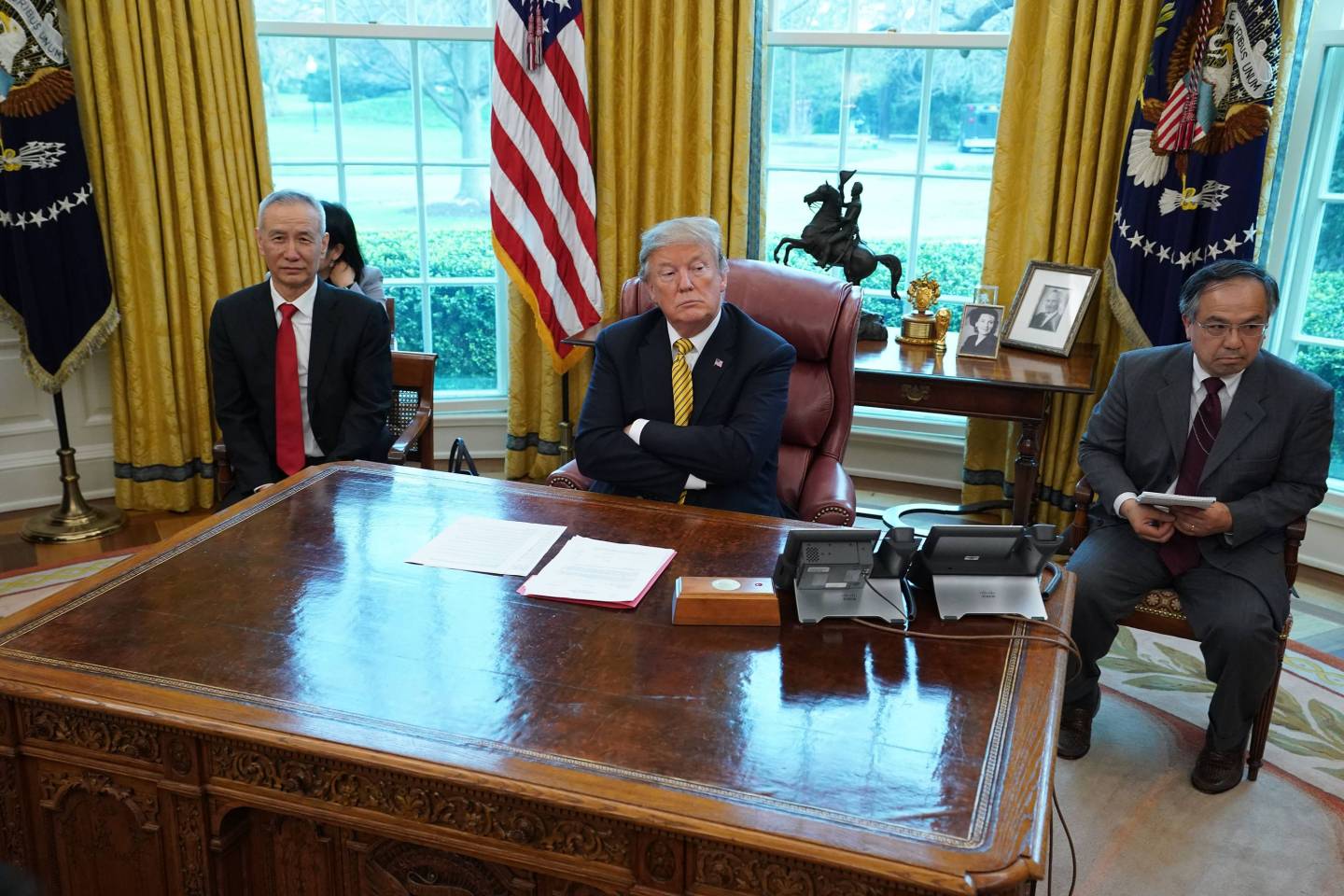 WASHINGTON, DC - APRIL 04: U.S. President Donald Trump (C) and Chinese Vice Premier Liu He (L) wait for journalists to leave the the Oval Office before beginning their meeting at the White House April 04, 2019 in Washington, DC. The New York Times reported Thursday that Trump is likely to announce plans for a future summit meeting with Chinese President Xi Jinping to resolve remaining trade issues and sign a final agreement between the U.S. and China. (Photo by Chip Somodevilla/Getty Images)
Chip Somodevilla/Getty Images

Going into this month, the U.S. economy looked to be in exquisite shape. First-quarter GDP growth surpassed virtually all expectations, the unemployment rate fell its lowest level in nearly 50 years in April, and the S&P 500 was setting new record highs on almost a daily basis.

Then on Sunday, President Trump pressed “tweet” on his latest rhetorical arrow at China—using his favorite medium to threaten to raise tariffs on $200 billion of Chinese imports, as well as new tariffs on $325 billion of additional goods. Contrary to reports of steadily progressing trade talks between the U.S. and China, Trump claimed that discussions have been moving “too slowly” and indicated that the Chinese were “attempt[ing] to renegotiate” terms.

For 10 months, China has been paying Tariffs to the USA of 25% on 50 Billion Dollars of High Tech, and 10% on 200 Billion Dollars of other goods. These payments are partially responsible for our great economic results. The 10% will go up to 25% on Friday. 325 Billions Dollars….

….of additional goods sent to us by China remain untaxed, but will be shortly, at a rate of 25%. The Tariffs paid to the USA have had little impact on product cost, mostly borne by China. The Trade Deal with China continues, but too slowly, as they attempt to renegotiate. No!

Trump’s rhetoric roiled the global markets on Monday morning, with the major U.S. indices down across the board. And with the tap of a screen, the President once again showed how, when it comes to arguably his greatest political asset—one of the longest economic expansions in American history—he may very well be his own worst enemy.

For all his talk about how the Federal Reserve’s tightening monetary policy was threatening to stifle the economy, it has been Trump’s ongoing stance toward China that has proven the greatest single risk factor to the markets. If investors hate uncertainty, then the president’s willingness to rock the boat via policy declarations on Twitter have been the equivalent of bull-market kryptonite.

Take Trump’s now famous “Tariff Man” tweet on December 4, when he cast doubt upon the temporary, 90-day trade truce that had been agreed between U.S. and China just days earlier at the G20 summit in Buenos Aires. The uncertainty triggered by the president’s posturing sent the markets into a sell-off, with the Dow Jones Industrial Average, S&P 500, and Nasdaq Composite all plunging more than 3 percent that day.

More than hindering market psychology, the ongoing trade dispute has risked disrupting an American economy that—for all of the Trump administration’s talk around rebalancing the U.S.-China dynamic in favor of American companies and workers—remains heavily reliant on imported goods. Not only did the U.S.’s trade deficit hit a record $891 billion at the end of last year, but its trade gap with China alone stood at $419 billion in 2018.

And contrary to conventional wisdom, that trade deficit is fueled by more than just American consumers buying ready-made, imported products. According to UBS economist Robert Martin, the tariffs levied on foreign imports threaten what has been “a real manufacturing renaissance” in the U.S. over the past two years—with small and mid-sized American companies, in industries ranging from auto parts and fabricated metals to plastics, chemicals and computers, driving a improved U.S. manufacturing sector.

Martin notes that tariffs imposed by the Trump administration last year hit such manufacturers particular hard—and in fact contributed to slowing economic conditions at the end of last year that yielded December’s market volatility and triggered fears of a possible recession on the horizon.

“Their business model is to import intermediate products from emerging markets, mainly China,” Martin says of the resurgent U.S. manufacturers. “When the tariffs came in, we saw a significant decline in [imports of] those tariffed goods, and we saw the real effects of those tariffs ripping through the economy [in December].”

Indeed, materials, industrials, and information technology were the three S&P 500 sectors hit hardest by Monday’s sell-off in the wake of President Trump’s most recent tariff threat, which Bank of America Merrill Lynch described as “the most significant escalation of the U.S.-China trade war to date” in a note on Monday morning.

“The immediate market response suggests that the latest escalation of the trade war was a complete surprise to investors,” BoAML global economist Aditya Bhave wrote in the note, adding that the markets “could be in for a bumpy ride before a trade deal is reached.” He added that the escalated tariffs on $200 billion of Chinese goods “would amount to an additional $30 billion tax on U.S. consumers and firms, representing the largest single round of tariff increases since the trade war began.”

While Trump’s rhetoric “is undoubtedly an attempt to speed up negotiations, and perhaps to extract more compromises out of China,” according to Bhave, it remains to be seen how China responds. Chinese officials were caught off-guard by Trump’s threat, the Wall Street Journal reported on Sunday night, and said to be considering canceling the latest round of trade talks between the two sides, which are due to resume in Washington on Wednesday. “China shouldn’t negotiate with a gun pointed to its head,” a source briefed on the situation told the Journal.

Of course, that’s exactly the sort of hardline negotiating stance toward China, and global trade at large, that Trump promised in riding a wave of economic populism all the way to the White House. It remains to be seen whether that approach proves successful in recalibrating the U.S.-China trade dynamic in America’s favor, as Trump promised, or ends up throwing the economy off-course—potentially squandering his biggest political advantage heading into the 2020 election.