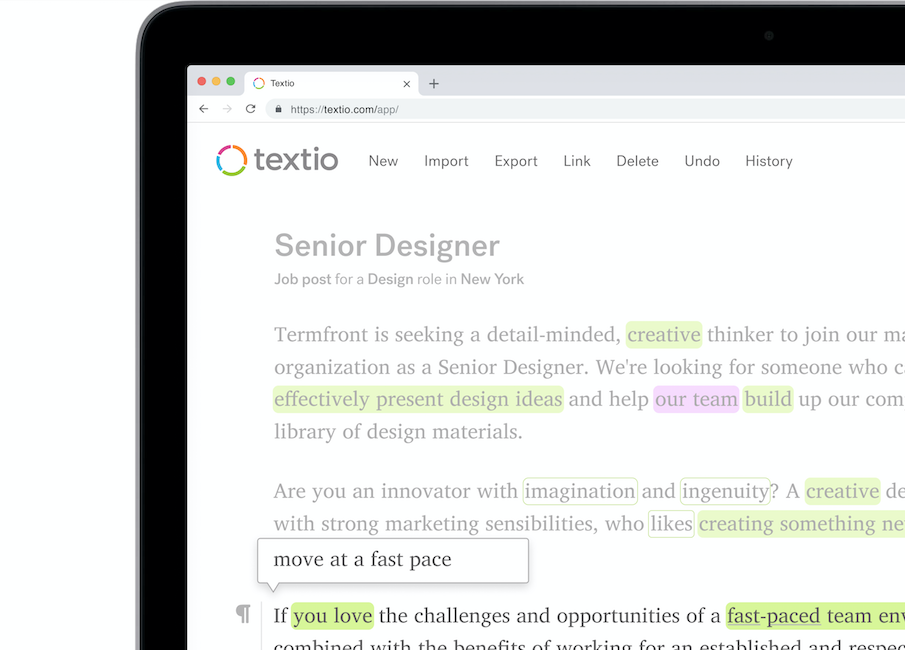 Words matter, and they often matter in different ways to different people. That’s why, for the past five years, text analytics startup Textio has studied—and helped to augment—the way companies in search of more diverse candidates communicate with prospective hires. Now, the company is launching a new product that takes that mission one step further.

Corporations from Nvidia to McDonald’s have used Textio’s original tech to change up their job listings in the hopes of attracting a wider pipeline. The company’s existing tool, called Textio Hire, makes predictions about how the text of an employer’s prospective job description will “compete for talent” in real time, and offers alternative words that it says are statistically proven to appeal to more people. One of the startup’s findings, for example, is that using the word “synergy” in a job description has a negative impact on people of color, while “alignment” has a more positive effect. The new product, Textio Flow, builds on that research, but goes beyond making wording suggestions, adding artificial intelligence capabilities that will actually write the description for you.

“Going back for a while now, our customers have been using Textio to discover what they’re already sounding like in ways they may not have been aware of,” says Kieran Snyder, CEO and co-founder of Textio. Her co-founder (and husband), Jensen Harris, adds: “It’s not just holding up the mirror to how you actually sound. But it’s the software to actually change how you sound.”

Think of Textio Flow as Google Smart Compose, only much more prolific and with an eye for culture change. Instead of suggesting a few words, the tool can write whole paragraphs for you. It does this by ingesting a company’s past writings—marketing material, historical job listings and the like—and incorporating Textio’s own large datasets. The latter helps customers learn from existing (and ever-changing) correlations between words and the varying responses they trigger in different demographics. That can mean two things for corporate customers: First, they can write job listings much faster, and second, they can theoretically attract even more people with each listing.

It’s no surprise that tech companies in particular have been interested in Textio’s tools.

Aubrey Blanche, the global head of diversity and belonging at workplace software maker Atlassian, says her company has been using Textio Hire since 2015. “All our job descriptions are put through Textio,” says Blanche. “It’s a requirement for us to make sure they are gender neutral in tone.”

Blanche says that, over time, Textio has helped Atlassian to change up its language. A few years back the company used the term “crazy smart” as one of the descriptors of its culture. But after Textio revealed that the particular choice of wording was a phrase overwhelmingly more attractive to males than females, it stopped using the term. “Language is the bleeding edge of cultural change,” says Blanche.

While it’s hard to measure exact causation, while using the tool, Atlassian has been able to increase its representation of women in technical roles and seen gains in its hiring of people of color too. Blanche says that she is looking forward to implementing Textio Flow, and to seeing what kind of impact it has. (The new technology will initially also be used for job listings, but has potential in email drafting and other type of corporate writing.)

To be sure, some customers will be more attracted to the allure of automating the writing process than to the appeal of attracting more diverse candidates. But Textio CEO Snyder says that helping companies that are serious about culture change is the “core” of Textio Flow.

“We tend to not pursue partnerships with companies who see Textio as a quick fix,” says Snyder. “The language that Textio generates isn’t just built on language you’re already using.”