The ‘Apple of Housewares’ Tests Its Products to the Extreme. Here’s How 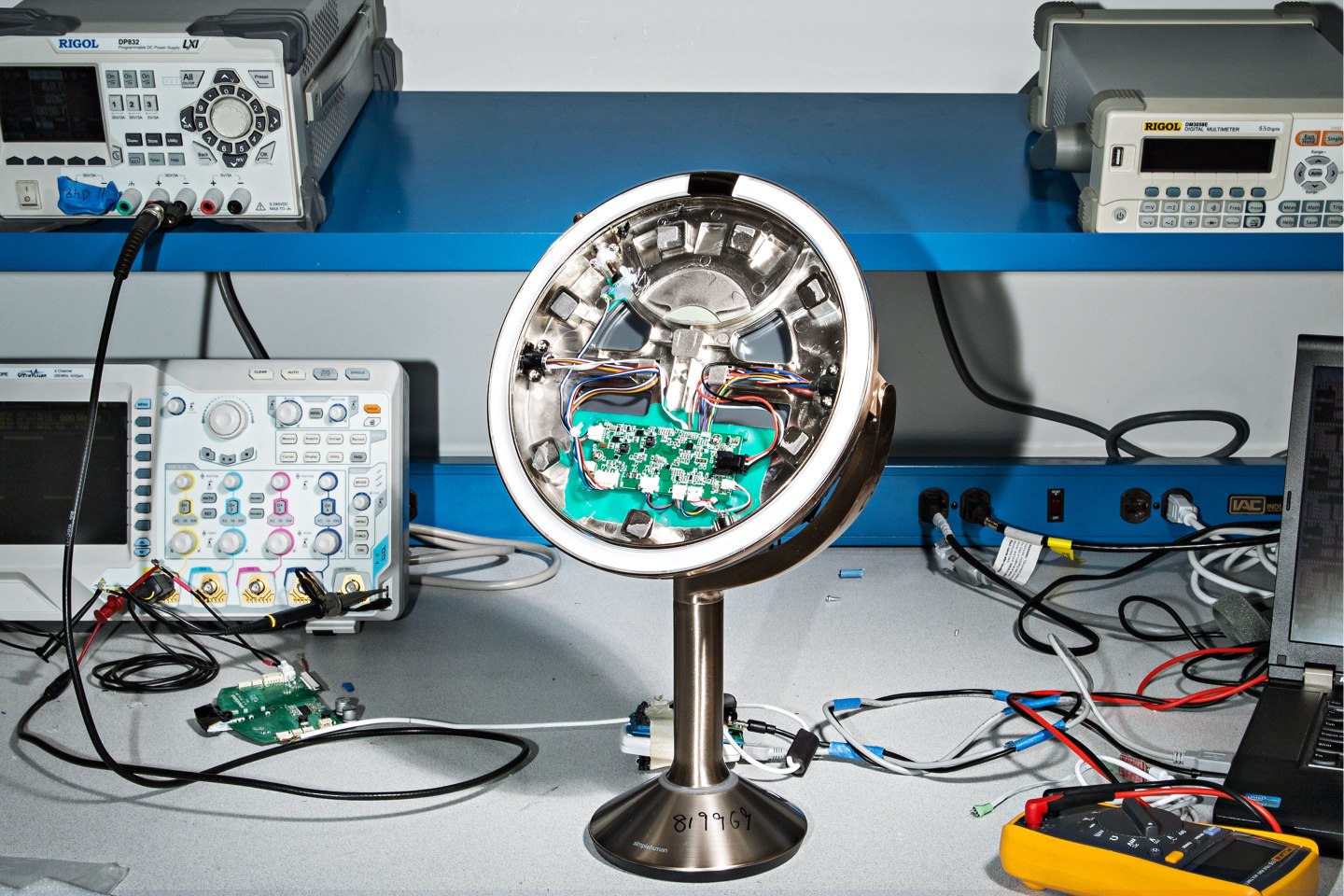 Photograph by Joe Toreno for Fortune

In the back of a big warehouse in Torrance, Calif., engineers at home-essentials maker Simplehuman are putting the company’s voice-activated trash can through its paces. The goal: to test the reliability of its voice-recognition technology by subjecting it to a sonic pummeling.

“If we start talking really loud, I bet one of them might fail,” Simplehuman CEO Frank Yang says coyly.

Simplehuman, described by some as the Apple of housewares for its sleek soap dispensers, high-tech mirrors, and dish racks, has attracted a devoted customer base. Last year its revenue grew 15% to more than $200 million, the company says.

Simplehuman’s rise comes despite stiff competition in the market for kitchen and bathroom products. Rubbermaid and Hamilton Beach produce cheaper trash cans, for instance, while Conair and iHome also churn out tech-enhanced mirrors.

But Joe Derochowski, an analyst for market research firm NPD Group, says what sets Simplehuman apart is the little extra it adds to its products. Higher-end home essentials, not cheaper products, accounted for nearly all of the 5.9% growth in the $26.7 billion housewares market last year.

“They’re an example of how you can take something simple like a mirror or a garbage can, innovate it, pair it with some great marketing, and do really well,” says Derochowski.

Simplehuman’s slogan is “Tools for efficient living,” and last spring, Yang and his staff of 100 finished moving into what he calls a “tool for building innovative products.” It’s an open-plan office with an indoor basketball court (Yang shoots hoops when he’s stressed) and labs where Simplehuman tests and tweaks products.

Around the corner from the opening and closing trash cans is a quiet booth with foam-padded walls. Yang opens the door, and Ed Sheeran’s “Shape of You” comes blasting out.

Two technicians are testing the speaker attached to Simplehuman’s latest product, a hi-fi mirror that debuts this April. It’s optimized for applying makeup, with 5x magnification, different lighting options (cool for daytime, warm for evening), and—here’s that added consumer benefit—a base equipped with a Bluetooth speaker that a Grammy-winning artist like Sheeran would probably find up to snuff.

“I’m a bit of an audiophile,” says Yang. “We’ve gone through 21 iterations of sound profiling—after 17, it started sounding okay.”

Simplehuman’s staff spent more than 8,000 hours developing the mirror and its illuminated ring so that light is evenly distributed around its circumference. It brightens with the touch of a finger rather than the flick of a switch, and in another room, there’s a microscope-like device that projects lines onto the mirror’s surface to make sure it reflects like a mirror should: If the lines are straight, the mirror’s good; if they’re curved, it’s not.

A second version of the mirror, on sale in May, comes with Google Assistant, the voice-activated helper that recites information on command. It’s an example of Simplehuman jumping on the latest tech bandwagon, popularized by smart speakers like Amazon Echo, while keeping true to its design philosophy.

Yang started Simplehuman 19 years ago with a $200,000 loan from his father, a Taiwanese immigrant who founded a company that makes storage units. “I worked with him for four years, and I got so bored,’” Yang says.

Unenthused by the idea of simply mocking up a new product and sending it to a factory in Asia to fabricate, as some of his competitors do, Yang builds his own prototypes. His company has owned 3D printers since 2013 and a circuit-board printer since 2016. Even now, he gets giddy when he walks by it.

“It’s the same game as the iPhone,” Yang says. “How do you put in a more powerful battery? You have to make other stuff smaller, and then the end product can be smaller, or”—he smiles—“you can make it do more things.”

A version of this article appears in the April 2019 issue of Fortune with the headline “Extreme Measures.”