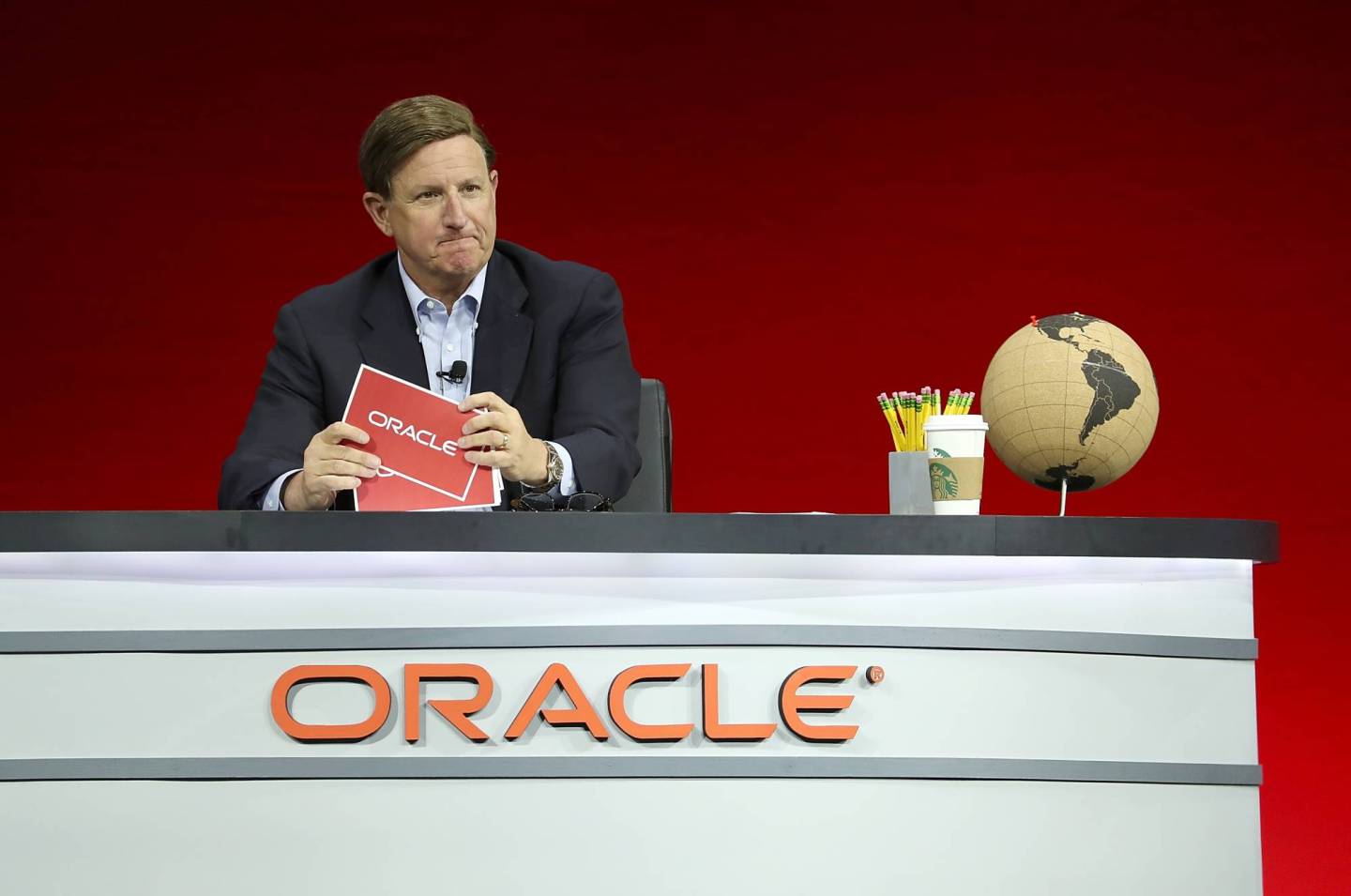 Imagine you’re running a venerable industrial company that’s been around for decades, is entrenched with its customers, and has a reputation for operational excellence. You’ve just made $2.7 billion in one quarter on sales of $9.6 billion. Your company is barely growing—sales were up 1% year-over-year and operating income was just a smidge better, up 3%. Your results were somewhere better than Wall Street expected.

Would you be shocked if investors bid down your shares 4% in the hours after you reported results?

If your company was enterprise software stalwart Oracle you wouldn’t be surprised at all. Oracle has been asserting for years that it was onto this cloud computing thing—mere years after asserting that cloud computing was a bunch of hooey. The Silicon Valley company’s third fiscal quarter results show plainly that this software emperor has no cloud clothes. (Sorry, it’s Friday.)

It’s impossible to know how good or bad Oracle’s cloud business really is because it combines the results with other business lines. “Cloud,” by the way, refers to software sold as an online subscription, compared with the programs Oracle sold for decades to customers who then ran the software themselves.

What’s totally clear is that the upstarts that have been coming after Oracle for years are no longer mere ankle biters. This 5-year-chart shows how Oracle has fared against Salesforce.com, whose market capitalization of more than $120 billion is now in the same area code as Oracle’s $190 billion.

We beg to differ. A day after Spotify complained about what it called anti-competitive practices at Apple, Apple fired back. The iPhone maker noted that most Spotify users listen for free with ads, and Spotify doesn't share any of its ad revenue with Apple. “Developers, from first-time engineers to larger companies, can rest assured that everyone is playing by the same set of rules," Apple said. Apple also announced the date for its World Wide Developer Conference. WWDC 2019 will be held in San Jose from June 3-7.

Never gone keep me down. Looking cool, calm, and collected in an all-black outfit, Tesla CEO Elon Musk unveiled the company's new electric crossover SUV, the Model Y. The Verge has a 3-minute video clip of highlights from the event, including Musk's parting words now that Tesla offers a Model S, 3, X and Y: "We are bringing sexy back, quite literally."

Leaking from the top. The Facebook news hose never runs dry. On Thursday, the social network said chief product officer Chris Cox and WhatsApp vice president Chris Daniels are leaving the company. Cox, one of the first 15 engineering hires at Facebook, said he was leaving because of the company's pivot to privacy and encryption. “This will be a big project and we will need leaders who are excited to see the new direction through,” Cox wrote in a post on his Facebook page.

If at first you don't succeed. Just a a few days after news leaked that Google was scaling back its long-suffering tablet efforts comes word that Walmart may be stepping in to fill the gap. The retailing giant filed an application to start selling tablets made in China that run Google's Android software. No word on specs or pricing yet. Speaking of Google, the search giant is likely to be hit with a massive antitrust fine by the EU for the third time. After paying $8 billion in fines for misbehavior in mobile and online shopping, the next fine—coming next week—will relate to search advertising, the Financial Times reports.

Snapshot. On Wall Street, in addition to Oracle's report that Adam discussed, Adobe said it revenue rose 25% to $2.6 billion but investors were disappointed by a light forecast for the upcoming quarter. Adobe shares, previously up 18% this year, lost 4% in premarket trading on Friday.

Off the hook. A Japanese court found Mark Karpelès, the head of defunct cryptocurrency exchange Mt. Gox, guilty on only one charge against him following the 2014 collapse of his business. Karpelès produced illegal business records but did not embezzle money or use his position for personal gain, and thus likely won't face time in prison, the court ruled.

DeepMind and Google: the Battle to Control Artificial Intelligence (1843 Magazine)
Demis Hassabis founded a company to build the world’s most powerful AI. Then Google bought him out. Hal Hodson asks who is in charge

The Software That Shapes Workers’ Lives (The New Yorker)
Modern supply-chain management, or S.C.M., is done through software. The people who design and coördinate supply chains don’t see warehouses or workers. They stare at screens filled with icons and tables. Their view of the supply chain is abstract. It may be the one that matters most.

State Capture: How the Gupta Brothers Hijacked South Africa Using Bribes Instead of Bullets (Vanity Fair)
It started with black market rations and ended with “the wedding of the century.” Novelist Karan Mahajan travels to India and South Africa to understand how three small-time investors fleeced an entire country—aided by some of the world’s most respected consultants.

A Three-Day Expedition to Walk Across Paris Entirely Underground (Longreads.com)
Journalist Will Hunt, who made the crossing with a group of urban explorers, recounts being menaced by rainwater and rats—and meeting fellow subterranean wanderers along the way.

When it started, almost a decade ago, Google Fiber promised to remake the home broadband market with outrageously fast service at a cheap price. It's been a tough slog and in February, for the first time, Google announced it was pulling out of one of the 19 cities where it offered service. Adam Raymond reports from Louisville, Kentucky, to uncover for Gizmodo why Fiber failed there and what it left behind. For one, a big mess:

Now, the most visible sign of the tech giant’s screw up is lying all over the roads. “I literally just got done driving around, looking at streets with Google,” said Metro Councilman Brandon Coan. Strands of errant sealant are “everywhere,” he said outside a coffee shop in his district, one of a few where Google Fiber ran lines before its abrupt departure. “I’m confident that Google and the city are going to negotiate a deal … to restore the roads to as good a condition as they were when they got here. Frankly, I think they owe us more than that.”

Uber, the Mother of All Unicorns, Will Finally Begin Its IPO Process in April By Kevin Kelleher

Microsoft Is Bringing Xbox Live to iOS and Android. Could PS4 and Nintendo Be Next? By Alyssa Newcomb

You may have heard that Boeing is having major problems with the 737 Max airplane. Now the company is also in danger of losing a major rocket deal with NASA. Boeing's Space Launch System rocket, the largest in U.S. history, won't be ready in time for next year's scheduled launch of the Orion moon explorer. NASA Administrator Jim Bridenstine says "all options" are on the table, including possibly using a private commercial launch. Tough times for an aerospace giant.