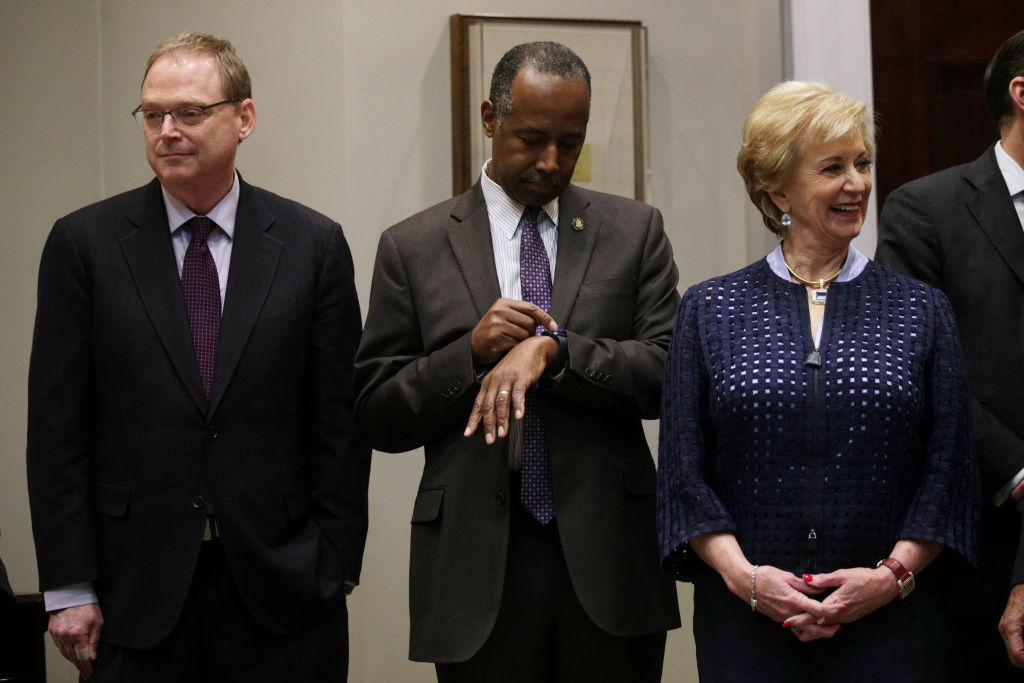 WASHINGTON, DC - FEBRUARY 06: (AFP-OUT) U.S. Housing and Urban Development Secretary Ben Carson looks at his watch as he waits with Small Business Administration Administrator Linda McMahon (R) and Chairman of the Council of Economic Advisers Kevin Hassett prior to a Roosevelt Room event at the White House February 6, 2019 in Washington, DC. President Trump announced that Under Secretary of the Treasury for International Affairs David Malpass will be the U.S. candidate for election as the next president of the World Bank. (Photo by Alex Wong/Getty Images)
Alex Wong—Getty Images

Secretary of Housing and Urban Development Ben Carson said in a TV interview with Newsmax TV that he would finish his current term but would “likely” depart after the 2020 presidential election.

“I would be interested in returning to the private sector because I think you have just as much influence, maybe more, there,” Carson said during the interview.

HUD was established in 1965 and provides mortgage insurance, public and Section 8 housing, and block grants. It is also involved with recovery plans for natural disasters. According to the agency, HUD has insured more than 30 million single family homes and provides affordable housing to more than 4.3 million low-income families.

Carson ran an unsuccessful presidential campaign in 2016. Donald Trump appointed him as the head of HUD even though the retired neurosurgeon had no experience in housing, executive management, or government.

In the interview on Monday, Carson said that “we are making tremendous progress ensuring our most vulnerable citizens are empowered with a path to self-sufficiency.”

Carson received criticism over such events as trying to redecorate his office with a $31,000 mahogany dining room set—an order later canceled—and having his son help organize a “listening tour,” although Ben Carson Jr. invited people he had potential business dealings with, which would be an ethical breach.

Compared to multiple other Trump appointees, those actions are almost small gaffes. However, Carson did receive attention when his office tried to triple the minimum rent charged to families receiving federal housing help. Under his leadership, HUD also appointed political operatives with no housing experience to positions in the agency and boosted their pay to between $98,000 and $155,000.