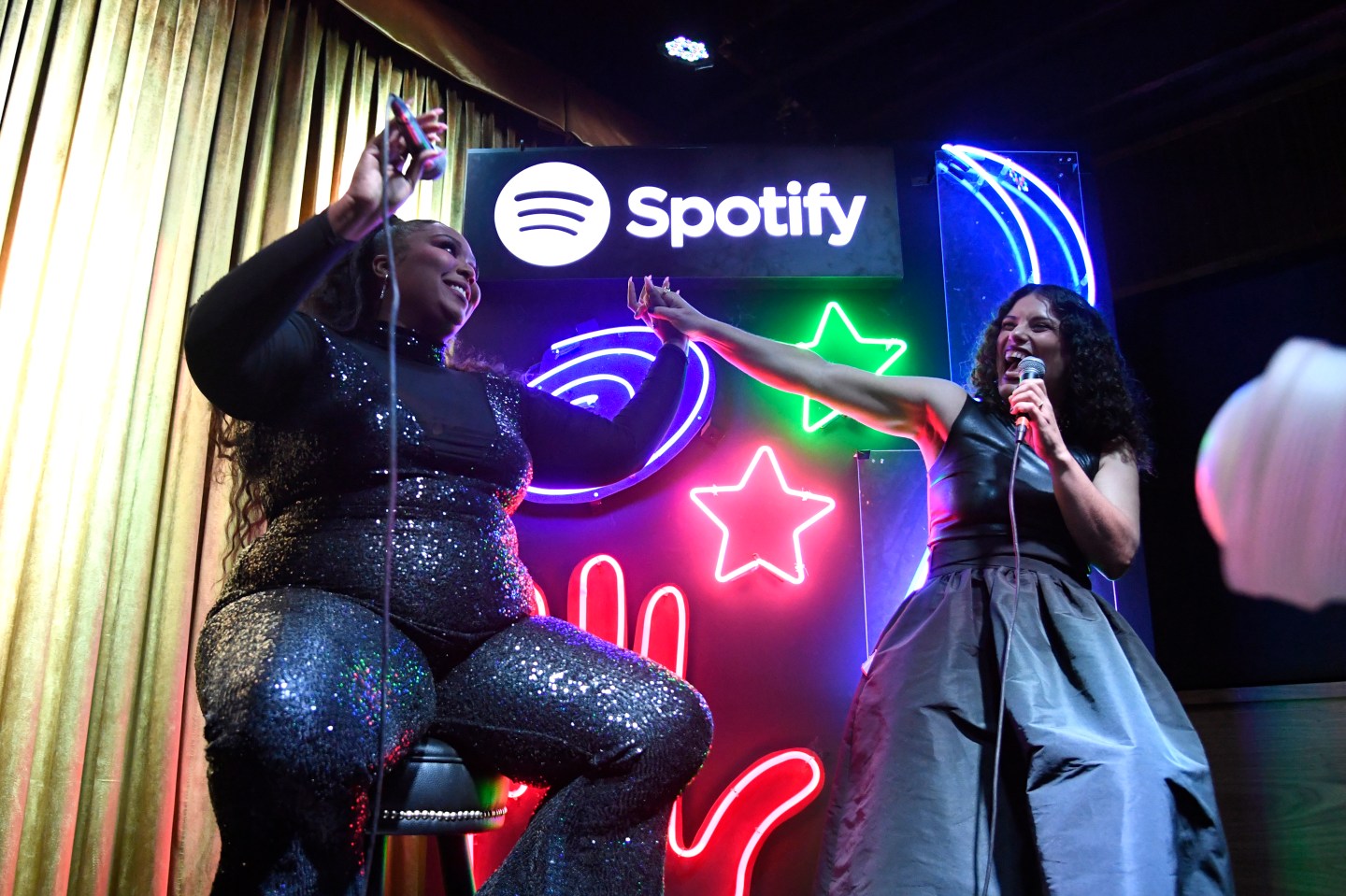 * As we noted yesterday, Spotify is buying two podcasting companies, Anchor and Gimlet. (I cleared my throat on the podcasting subject last month, when I wrote about a publisher Spotify didn’t buy, Wondery.) Spotify CEO Daniel Ek observed, in an interview with The Wall Street Journal, that the video market is 10 times the size of the audio market—a situation that could change. “The question I always ask myself is, ‘Are your eyes really worth 10 times as much as your ears?’ And I don’t think that’s the case,” he told the newspaper. “If we add more monetization opportunities, the industry will grow and that’s the opportunity.” That make sense, and all power to him helping rejuvenate a new/old medium: You say podcasting, I say streaming radio.

* The departure of Angela Ahrendts at Apple after five years highlights the astoundingly long average tenure of the company’s management team. Ahrendts’s replacement is Deirdre O’Brien, a 30-year Apple veteran and Tim Cook loyalist for two thirds of that time. Aside from the company’s general counsel, A.I. expert, and its relatively newbie (five years) chief financial officer, the entire executive team has been around a minimum of a decade and typically far more. It can’t be easy being new and senior at Apple.

* For two years, I ignored every article I read about a failed Malaysian investment fund called 1MDb. Then I sat next to an Australian who lives in Singapore who regaled me with the story in the book Billion Dollar Whale by Wall Street Journal reporters Tom Wright and Bradley Hope. (If this message finds you, seatmate, I never caught your name, but thank you.) One of Fortune’s best business books of 2018, I highly recommend this rip-roaring story of brazen fraud (by a Malaysian poseur named Jho Low), political corruption (by the then Malaysian prime minster, Najib Razak), and investment-banker callousness (Goldman Sachs).

Standing on a burning platform. Speaking of podcasts, new podcasting network Himalaya says it raised $100 million of private backing and will offer hundreds of shows by year end. The plan is to help creators make money via ads, tips and other means. The funding comes from Chinese audio network Ximalaya FM, General Atlantic and investment firm SIG. It all sounds a little too good to last, though. “Even if we don’t cover our costs, we’re willing to pay an amount at a cost per acquired user much like any other tech platform," Himalaya vice president Peter Vincer tells Fast Company.

Standing on a burning platform, the sequel. The almost-$100 billion Vision Fund run by SoftBank Group decided not to wait around and see if chipmaker Nvidia can mount another furious stock rally, it seems. The fund dumped its entire stake, worth about half its value from the heights of last fall, in January for $3.6 billion.

Putting out the fire. Antitrust regulators in Germany told Facebook they must obtain more explicit consent before combining users data from apps like Whatsapp and Instagram with information collected from its main Facebook service. "Facebook will no longer be allowed to force its users to agree to the practically unrestricted collection and assigning of non-Facebook data to their Facebook user accounts," the Bundeskartellamt said. Facebook said it would appeal.

Costly retreat. After stirring a hornet's nest of criticism, Instacart said it would cease its recently-enacted policy of deducting customers tips from its minimum payment to its delivery workers. “Customer tips will no longer have any impact on Instacart’s contribution to shopper earnings,” CEO Apoorva Mehta wrote in an email to the workers.

Deeper retreat. On Wall Street, Sonos delivered a doubly whammy, saying that chief financial officer Mike Giannetto will leave without an immediate replacement and that sales in the current quarter are weaker than expected. Still, sales and earnings from last quarter were above analyst expectations. Revenue rose 6% to $496 million and net income jumped 53% to 55 cents a share. Net net, investors didn't like the sound of what they heard and Sonos shares, down 18% from its August IPO, lost another 8% in premarket trading on Thursday. Twitter also disappointed, even with better sales and profit than analysts anticipated. Revenue rose 24% to $909 million and earnings per share almost tripled to 33 cents. But monthly active users slipped 1% over the past three months to 321 million and Twitter's stock lost 7%.

For a while, MoviePass was the greatest thing ever invented to keep cinema fans happy. But the service's incredible subscription deal never seemed to add up and faced a melt down of cutbacks and restrictions last year. Andrew Gruttadaro delves into the mess for The Ringer and interviews MoviePass founder Mitch Lowe, who promises he can revive the golden era. Lowe and executive vice president Khalid Itum compare the company to Amazon, which lost money for many years before turning profitable:

“The only reason anybody has issues [with us] is that, eventually, we failed,” says Lowe. “We failed to deliver the service we were trying to deliver.” Itum says that isn’t going to happen again, and at this point seems slightly annoyed that I remain skeptical. “Our model always showed we would get there. We underestimated fraud. There were mistakes lots of people in business make. Everything was headed in the right direction, just too slow.” He adds: “I think we’re sitting on something that could have 10 to 20 million subscribers in three to five years.” How MoviePass plans to make enough money to offset the price of purchasing tickets and remain in business for three to five years is somewhat murky.

How to Venmo Like a Millennial: Inside the Bizarre World of 'Penny Pokes' By Alyssa Newcomb

Why Are Security Cameras Getting Hacked? Your Sloppy Password Management, Nest Says By John Patrick Pullen

Google's Killing Off Yet Another Feature Next Month By Chris Morris

Do you like to drive fast, maybe too fast? Car aficionado web site The Drive decided to crunch public data from every speeding ticket issued last year in the state of Texas and find all the examples of folks going at least 120 miles per hour. There were 228 of them. Fastest was a 2003 Porsche 911 going 166 mph in Carson County. But the best excuse came from the driver of a 2018 Mazda CX-5, caught going 123 mph, who told officers she was "running late to take her daughter to the DPS office to get her driver['s] license."