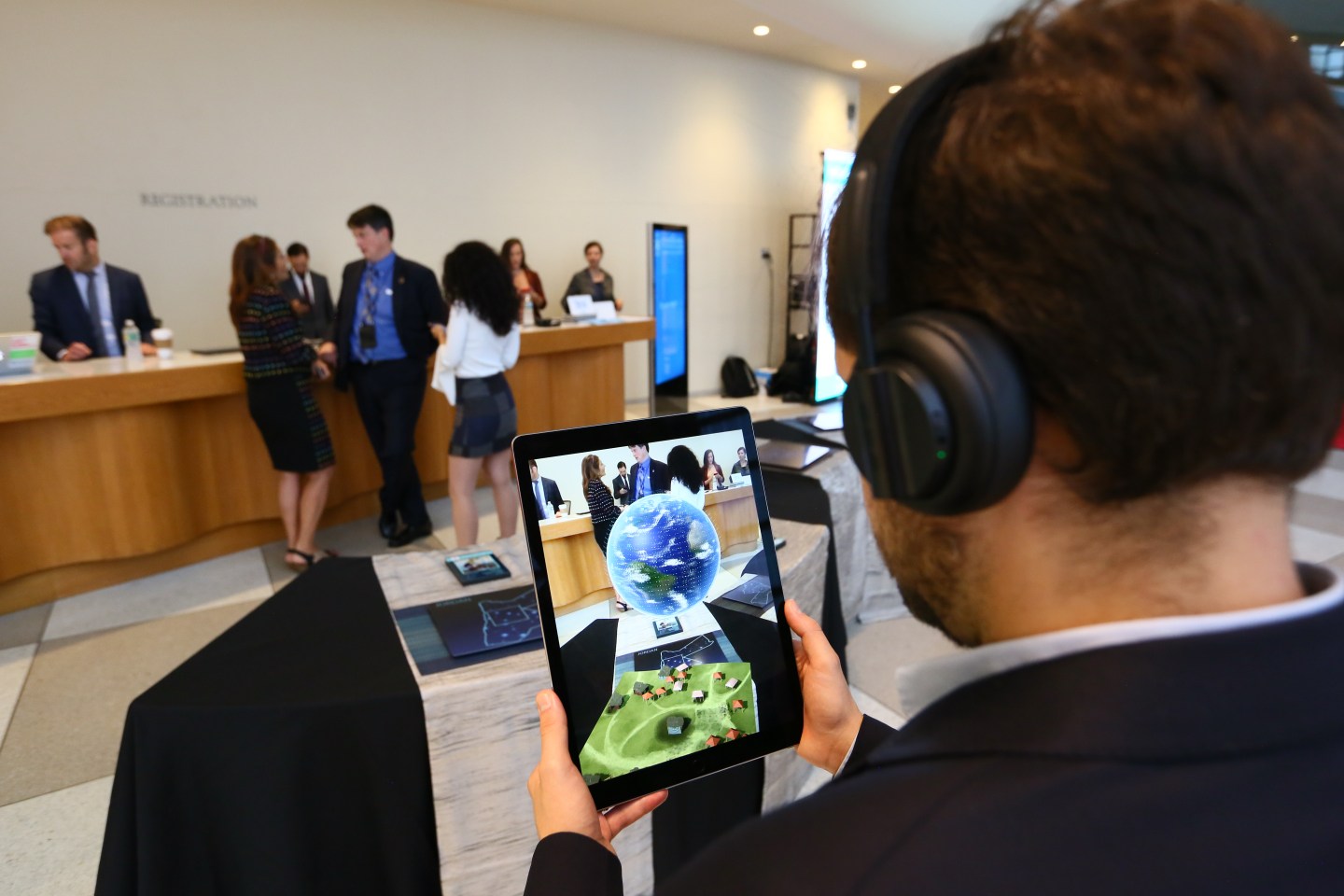 The manipulation of reality is often described as the future of entertainment. Virtual reality, set in a simulated world, and augmented reality, which enhances the real one, are increasingly making strides in cinema (3D movies), video games (Pokémon Go), and social media (Snapchat filters). The possibilities that VR and AR offer media junkies seem limitless. But that’s not all the technologies can be used for.

At the World Economic Forum in Davos, Switzerland in January, the United Nations plans to launch an augmented reality exhibit, its first such production, to showcase humanitarian aid efforts and its beneficiaries. Created specifically by the World Food Programme (WFP), a branch of the UN that will commemorate World Food Day on Tuesday, the exhibit will take viewers to three countries—South Sudan, Bangladesh, and Jordan—to learn about the challenges of real-life beneficiaries and discover how the WFP is using technology to solve them.

Each country’s story plays out over the course of roughly two minutes of video footage, accessible by holding a tablet computer over special placemats with QR codes. Once scanned, the AR activates and introduces the viewer to a 3D graphic with audio. In each experience, the viewer is presented with information about the country’s current geopolitical challenges and the exorbitant cost of food. (In South Sudan, for example, viewers see a chart revealing that the cost of a home-cooked plate of food is $348.36 at prices equivalent to those in New York City.) Voiceovers taken from interviews with real-life beneficiaries then explain how technology is helping them in their respective situations. “I no longer worry about being robbed,” says Hana, a Syrian refugee living in Jordan, of biometric and blockchain technology utilized in her camp to increase security and ease of transactions.

The project was developed in collaboration with Millennium Art, a communications agency that has worked with the UN on large-scale exhibitions, and Katapult Communications, a partner agency that specializes in emerging media technology like AR. In designing the exhibit, Paul White, Katapult’s creative director, says the team wanted to focus on two key aspects: practicality and the ability to effectively convey a message. “From a [user interface] point of view, we wanted it to be as non-interactive as possible,” he tells Fortune. “Pick up a tablet and go to the place where the experience is deployed. The only activity that the observer is doing is exploring the environment—letting the story play out as you would in a movie.”

From a story point of view, he adds, the idea was to make it “as compelling as possible” while not “overwhelming in one story.” Says White: “We wanted to bring forward not only the background of the beneficiary in question, but also pick up on the technology that the World Food Programme deploys and utilizes to help people with food.”

According to a 2018 report from multiple agencies within the UN, including UNICEF and the Food and Agriculture Organization, hunger is on the rise. The agencies estimate that one in nine people—some 821 million—are “chronically undernourished,” while 3 million children die of hunger every year. To address rising rates over the past three years, the UN Security Council earlier this year passed a landmark resolution acknowledging for the first time a formal link between hunger and conflict—a key takeaway from the WFP’s AR project.

“They both drive the disruption of progress,” says Kristin Gutekunst, who as lead interactive producer at WFP helped produce the AR exhibit. “[The UN is] thinking about how it drives migration, how it drives insecurities in different regions… all those things start to come together.”

The AR exhibit is part of a larger exhibition from WFP called “Feed Our Future: Tech and the End of Hunger.” The showcase, which first debuted at the 73rd UN General Assembly last month, includes a 360-degree virtual reality cinema that immerses viewers in present-day Nigeria, where the WFP is using data and mobile technology to respond to a food security crisis affecting millions. The UN began experimenting with virtual reality in January 2015, first using it as an empathy tool to raise awareness and donations.

Unlike VR, which is limited by cumbersome headsets, AR is proliferating thanks to the prevalence of capable smartphones. Apple, for example, released its “ARKit” in 2017 to make it easier for software developers to use AR in apps developed for iOS, its mobile operating system. “It’s interesting that you can have that kind of world brought you, instead of your stepping in that world,” says WFP spokesperson Shaza Moghraby.

Today, the UN’s AR exhibit remains a prototype that it hopes to refine ahead of Davos. But it’s confident that augmented reality can become a powerful educational tool for people in need.

“It’s starting off a whole new strategy in communications,” Gutekunst says. “How do you use these new technologies to break through this kind of apathy for hearing about what’s happening around the world? And for understanding it in a really personalized way so you have a global connection to this content that is creeping ever-closer to people’s homes.”