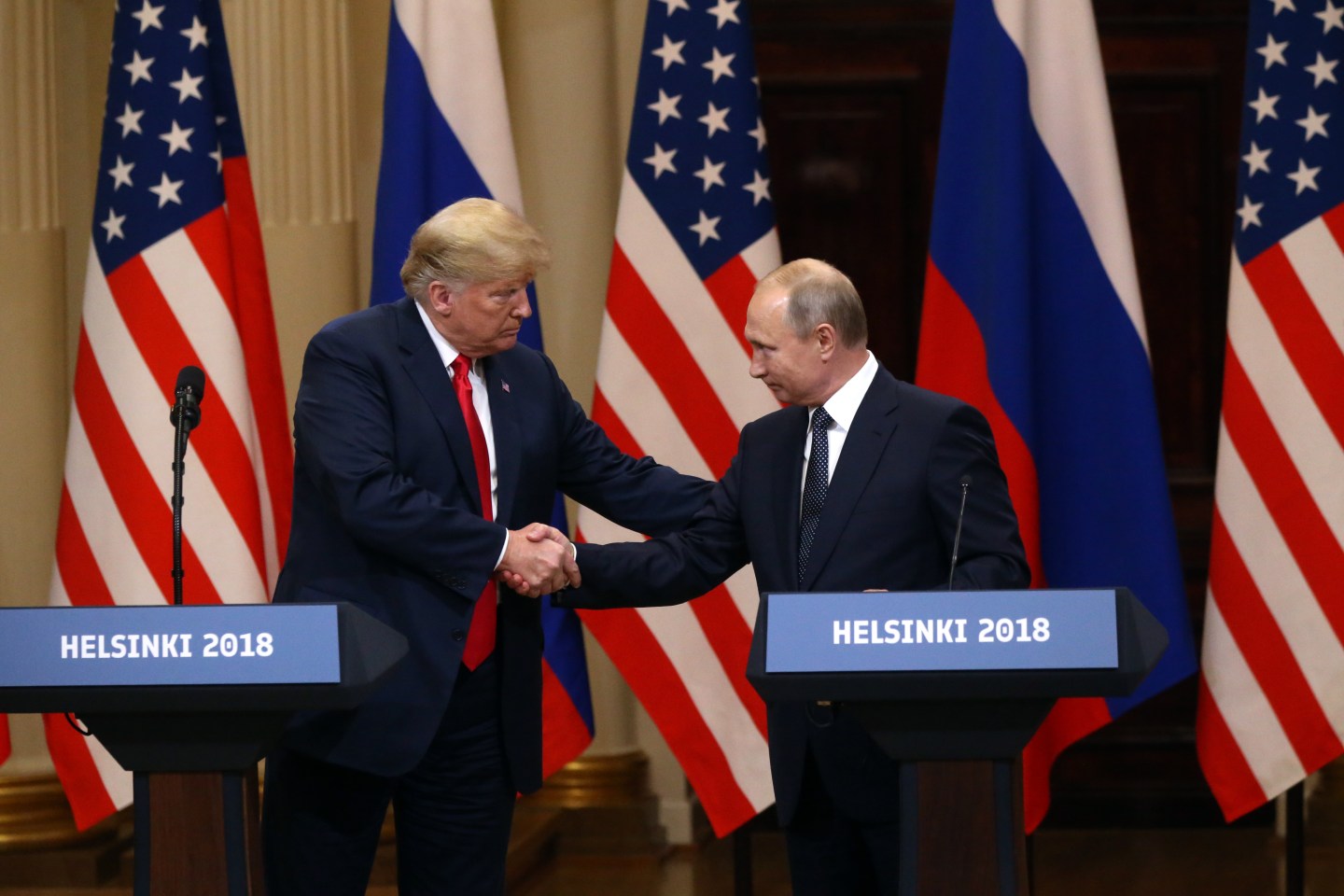 The Republican-led Senate signaled unease with President Donald Trump’s shifting policies toward Russia after his meeting with Vladimir Putin as the White House announced the U.S. president is seeking a repeat summit in Washington later this year.

The Senate effectively rebuked Trump for considering Putin’s request to question U.S. officials, including President Barack Obama’s former U.S. ambassador to Moscow, amid rising concern in Washington that the rest of the U.S. government still doesn’t know what happened in Trump and Putin’s private meeting in Helsinki on Monday.

Putin told Russian diplomats that in Helsinki, he proposed a referendum to resolve the conflict in eastern Ukraine but agreed not to disclose the plan so that Trump could consider it, according to two people who attended Putin’s closed-door speech on Thursday.

Three days after the summit, Trump’s director of national intelligence, Dan Coats, told an audience in Aspen, Colorado that “I don’t know” what happened during the president’s one-on-one meeting with Putin, which lasted about two hours. He also said he wouldn’t have recommended Trump meet alone with the Russian leader.

The White House meanwhile announced Trump has invited Putin for a second summit in Washington the fall. “Discussions are already underway” to prepare for the follow-up meeting, White House Press Secretary Sarah Sanders said in a tweet.

In Helsinki, @POTUS agreed to ongoing working level dialogue between the two security council staffs. President Trump asked @Ambjohnbolton to invite President Putin to Washington in the fall and those discussions are already underway.

“I look forward to our second meeting so that we can start implementing some of the many things discussed, including stopping terrorism, security for Israel, nuclear proliferation, cyber attacks, trade, Ukraine, Middle East peace, North Korea and more. There are many answers, some easy and some hard, to these problems…but they can ALL be solved!” Trump said in a pair of tweets earlier in the day.

The Summit with Russia was a great success, except with the real enemy of the people, the Fake News Media. I look forward to our second meeting so that we can start implementing some of the many things discussed, including stopping terrorism, security for Israel, nuclear……..

….proliferation, cyber attacks, trade, Ukraine, Middle East peace, North Korea and more. There are many answers, some easy and some hard, to these problems…but they can ALL be solved!

In a resolution adopted 98-0 on Thursday, senators called on the government to refuse to make any current or former U.S. officials available for interrogation by Putin’s government. Minutes before the vote was scheduled to begin, Sanders issued a statement rejecting the Russian proposal.

“It is a proposal that was made in sincerity by President Putin, but President Trump disagrees with it,” Sanders said. A day earlier she didn’t shoot down the idea, instead saying Trump was “going to meet with his team” about it.

The measure that forced the White House’s hand is nonbinding. But it was written by the Senate’s top Democrat, Chuck Schumer, and put to a vote by the majority leader, Republican Mitch McConnell, an unmistakable message to the president.

“Let this resolution be a warning to the administration that Congress will not allow this to happen,” Schumer of New York said on the Senate floor just before the vote. “I call on President Trump to say once and for all, not through his spokespeople, that the lopsided, disgraceful trade he called an ‘incredible offer’ is off the table.”

Some administration officials have said they are concerned there may be no shaking a public perception that Trump is too cozy with Putin. It was only three days ago that Trump stood next to the Russian president in Helsinki and questioned U.S. intelligence findings that the Kremlin interfered in the 2016 election.

Since then Trump issued a belated clarification, undercut the reversal with qualifiers, made new comments contradicting U.S. intelligence and then sent his spokeswoman out to deny it happened. Further, the lack of a public explanation of what Trump and Putin may have agreed to during more than two hours in private has left all U.S. policy toward Russia unclear.

“What did you agree to in that room?” Democratic Senator Bob Casey of Pennsylvania said on the Senate floor before the vote, saying the only accounts so far have come from Russian officials.

At the summit with Trump in Helsinki, Putin proposed letting Russians observe interrogations of former U.S. Ambassador to Russia Michael McFaul and other Americans. In exchange, U.S. Special Counsel Robert Mueller could send members of his team to watch Russian questioning of 12 Russian intelligence agents indicted by a U.S. grand jury last week in connection with hacking Democratic Party email accounts before the 2016 election.

After the Senate’s unanimous vote, McFaul wrote on Twitter, “98-0. Bipartisanship is not dead yet in the US Senate. Thank you all for your support.”

98-0. Bipartisanship is not dead yet in the US Senate. Thank you all for your support.

Allowing a foreign government to interrogate a former American ambassador would be an unprecedented breach in protections traditionally provided to the nation’s diplomats.

Trump’s willingness to entertain the request makes him “ look weak in the eyes of Vladimir Putin,” McFaul said Thursday on MSNBC. “We look like we won’t push back on outrageous, crazy ideas.”

The Democratic resolution, S.Res. 584, says, “It is the sense of Congress that the United States should refuse to make available any current or former diplomat, civil servant, political appointee, law enforcement official, or member of the Armed Forces of the United States for questioning by the government of Vladimir Putin.”

While McFaul’s name wasn’t mentioned at the news conference held by the U.S. and Russian leaders in Helsinki, Trump described Putin’s proposed reciprocal interrogations as an “incredible” deal.

FBI Director Christopher Wray said at the Aspen Security Conference on Wednesday that listening in as Russia interrogates suspects wanted by the U.S. is “certainly not high on our list of investigative techniques.” And letting Russians come to the U.S. to observe questioning, he said wryly, is “probably even lower on our list.”

State Department spokeswoman Heather Nauert told reporters Wednesday that a Russian grilling of a former diplomat “would be a grave concern to our former colleagues.” She said the Russians are making “absolutely absurd” assertions about 11 American citizens they want to question, although she declined to rule out the Russian proposal when asked about it repeatedly.

Also on Thursday, McConnell ordered Senate committees to review additional sanctions and “additional measures that could respond to or deter Russian malign behavior.”

A number of senators have signed on to a bill offered by Republican Senator Marco Rubio of Florida and Democrat Chris Van Hollen of Maryland that would impose stiff sanctions on Russia’s energy and banking sectors if the Director of National Intelligence—not Trump—certifies that Russia interfered in any future election.