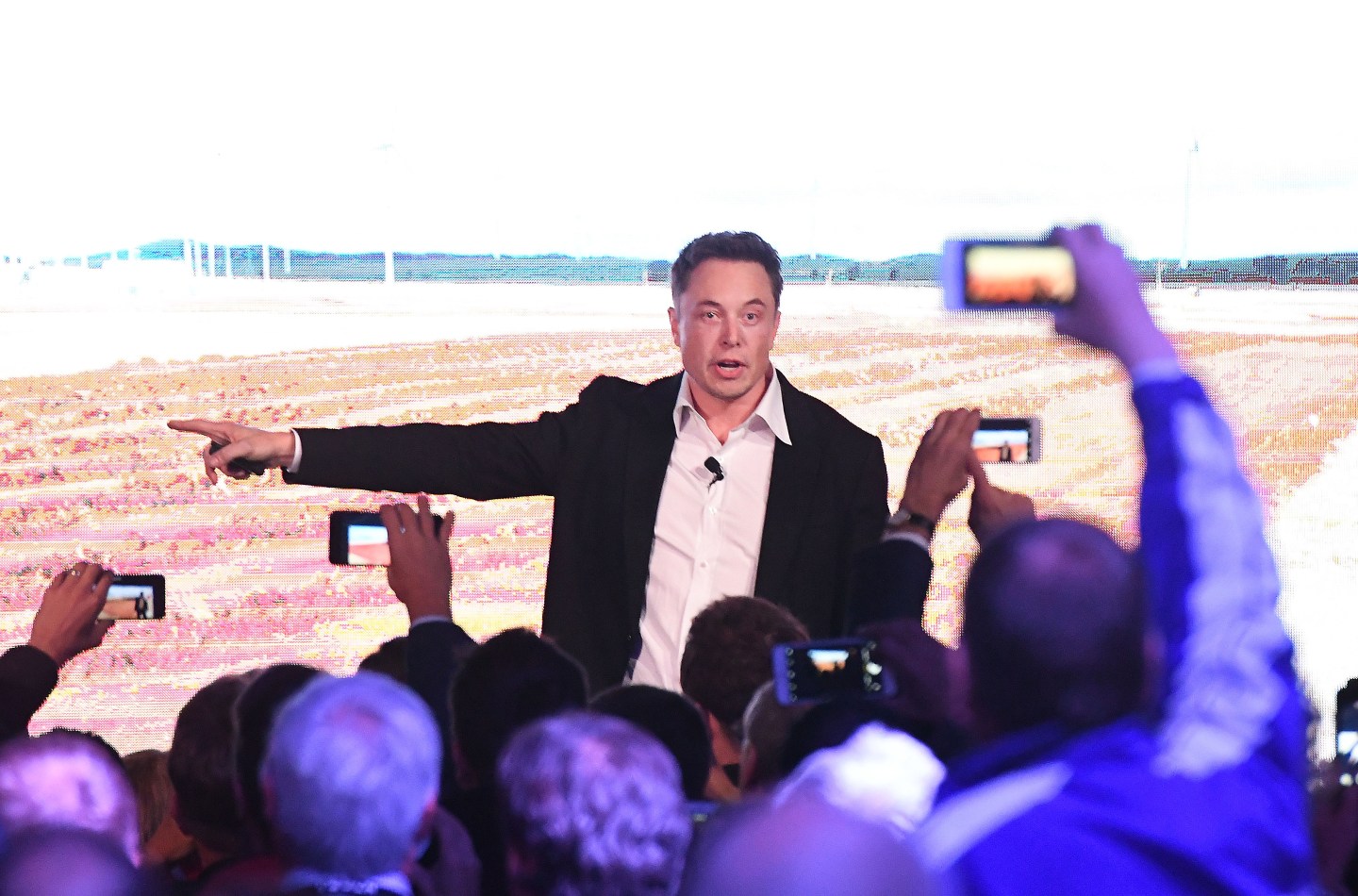 ADELAIDE, AUSTRALIA - SEPTEMBER 29: Elon Musk during his presenation at the Tesla Powerpack Launch Event at Hornsdale Wind Farm on September 29, 2017 in Adelaide, Australia. Tesla will build the world's largest lithium ion battery after coming to an agreement with the South Australian government. The Powerpack project will be capable of an output of 100 megawatts (MW) of power at a time and the huge battery will be able to store 129 megawatt hours (MWh) of energy. Tesla CEO Elon Musk has promised to build the Powerpack in 100 days, or he will deliver it for free. (Photo by Mark Brake/Getty Images)
Mark Brake—Getty Images

Elon Musk had quite the weekend, following a week in which his “kid-size submarine” was shunned as a means of retrieving a dozen Thai boys stuck in a flooded cave. The Tesla CEO was clearly stung by the opinion of the rescue team that his metal tube was of little use in the circumstances, and he simply would not let the matter lie.

After Vern Unsworth, a British diver who was involved in the rescue, derided Musk’s offer as nothing more than a public relations stunt—telling him he could “stick his submarine where it hurts”—Musk lost it. He tweeted that it was suspect for a British man to be living in Thailand, said Unsworth was a pedophile, and even doubled down in a subsequent tweet, saying: “Bet ya a signed dollar it’s true.”

Unsworth, understandably, is considering legal action over the attack. Musk has deleted the offending tweets, but the exchange left him looking nasty and more than a little self-serving.

How did it get to this point? At least part of the issue has to be the hero worship that surrounds Musk, much as it once surrounded Steve Jobs.

To the point of practically being a walking meme, Musk is the enthusiastic avatar for a Silicon Valley culture that says anything is possible with enough bravado thrown at it. He has had multiple songs of praise written about him, with a sample lyric reading: “Elon, one to lead us all / The champion for the future of humanity.” Even if it’s leavened with a pinch of irony, it’s not hard to see how such deification can go to a person’s head—especially when the person in question continues to make genuinely impressive achievements in his field.

Even when backed up on Twitter by an army of fans who lash out at his critics, no-one should be so arrogant as to believe that expertise in their field gives them more insight into other fields than those who are on the ground—or, rather, in the cave. Even if his original intentions went beyond self-promotion, it was foolish of Musk to insult a hero (and an expert in his own domain) for pointing out the unsuitability of Musk’s cylinder. Those who lack humility risk humiliating themselves.

Incidentally, this afternoon marks the start of Fortune‘s three-day Brainstorm Tech conference in Aspen, Colo. You can watch the livestream here, beginning at 2 p.m. Mountain Time with an appearance by Uber’s Dara Khosrowshahi—a CEO who has all but trademarked humility as he cleans up the messes left by his bullish predecessor.

President Donald Trump has caused consternation in Europe by describing the EU as the U.S.'s biggest enemy, ahead of Russia and China, in an interview with CBS. He based this assertion on his dissatisfaction with EU trade policies, but, coming as it did after his reported threat to withdraw the U.S. from NATO, it was yet another reason for Europeans to feel rattled about the historic U.S.-EU alliance. Donald Tusk, the president of the European Council, responded by tweeting: "America and the EU are best friends. Whoever says we are foes is spreading fake news." Fortune

While Trump is meeting with Russian President Vladimir Putin in Helsinki, the EU and China—both stung by U.S. tariffs—have been holding their own talks. According to a joint statement released after a meeting in Beijing, Chinese and EU leaders indicated continued support for the Iran nuclear deal and the Paris climate agreement, both of which have been abandoned by the U.S. Tusk also warned Trump that trade wars can evolve into "hot conflicts." Bloomberg

Deutsche Bank's shares shot up by more than 6% after it said it would beat analyst estimates with net income of €400 million ($468 million) for the second quarter. Analysts were apparently only expecting net income of €159 million, and income before income taxes of €321 million—the actual figure there is around €700 million. All this is terrific news for the German bank, which has been in the doldrums for a while over less-than-well-received turnaround plans. Financial Times

McDonald's had pulled its salads from around 3,000 mostly Midwestern outlets, due to possible lettuce contamination. The Centers for Disease Control and Prevention found 61 cases of cyclosporiasis among people who had eaten McDonald's salads in Iowa, Illinois, Minnesota, Missouri, Nebraska, South Dakota and Wisconsin. The restaurant chain is now trying to source a new lettuce supplier. NPR

Amazon's Prime Day today will be somewhat undermined in Spain by massive strikes at its warehouses, where workers are protesting an increase in working hours, the scrapping of bonuses, and improper health protections. An Italian union has backed the Spanish strikers. CNBC

Rolls-Royce has designed a propulsion system for a flying taxi, and it reckons the vehicles could be a reality in the early 2020s. The British engine maker joins companies such as Airbus and Uber in envisioning a future of "personal air mobility." Rolls-Royce's design involves the use of gas turbine technology to generate electricity for an electric vertical take-off and landing (EVTOL) vehicle. BBC

Lockheed Martin has won a "handshake deal" with the U.S. Defense Department for a batch of 141 F-35A combat jets, at a likely value of around $13 billion. The preliminary agreement reportedly lowers the price of the jet by around 6%, although final pricing and terms will be announced in the coming weeks. Reuters

Goldman Sachs will reportedly name David Solomon as the successor to CEO Lloyd Blankfein as soon as today. Blankfein would still stay on for a transitionary period. Solomon, Goldman's president, has long been in the frame as Blankfein's heir, but the succession was only supposed to be made official in the fall. So why now? That's not clear. New York Times