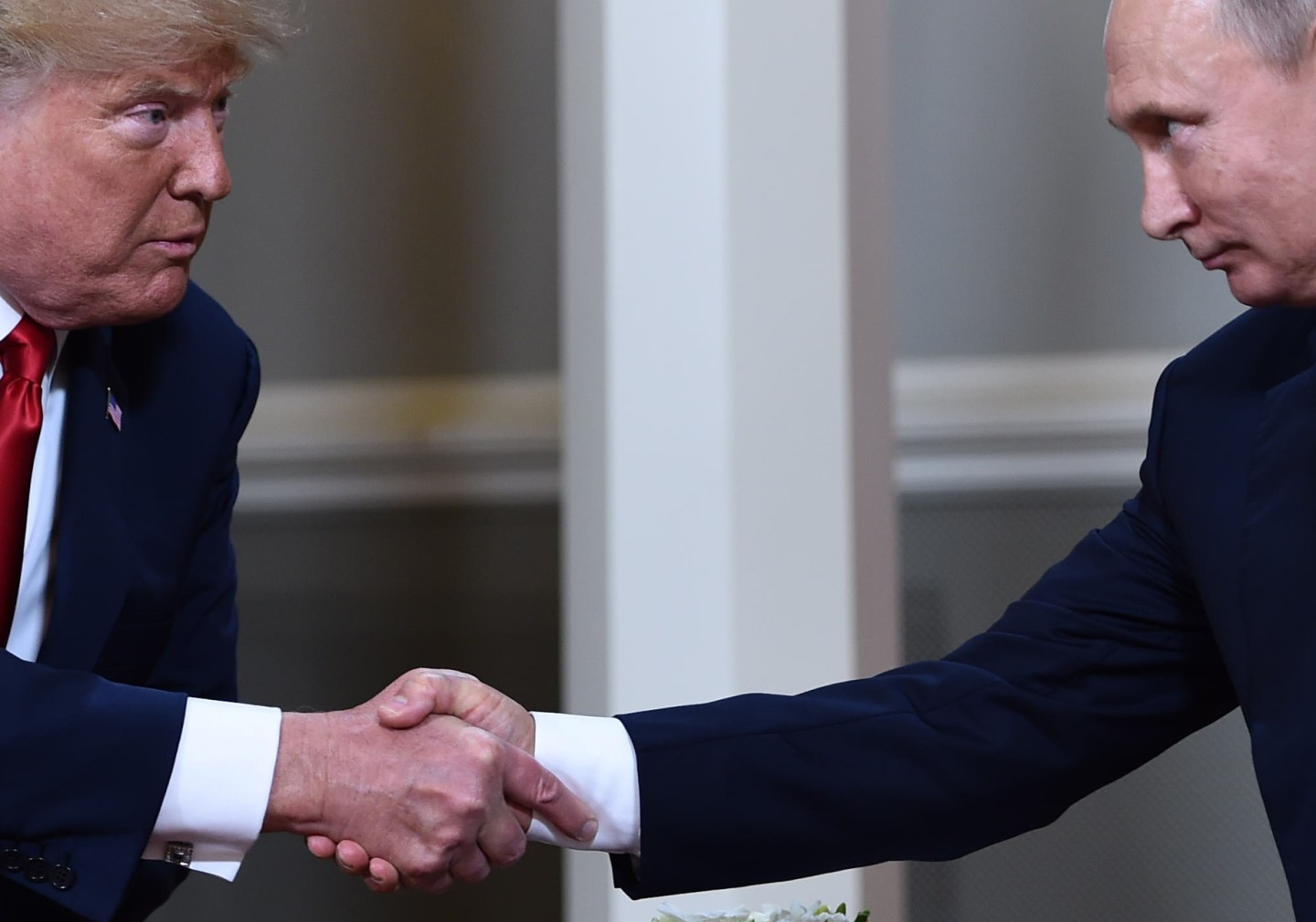 President Donald Trump said a two-hour, one-on-one meeting with Vladimir Putin was a “good start” on Monday for their Helsinki summit, but gave no indication he had relented to increased pressure to confront the Kremlin leader over election meddling.

The highly anticipated event was running behind schedule after the leaders extended their solo session, at which only their respective translators were in attendance. For Putin, the meeting is a win even before it began, as it helps restore an image of parity with the U.S. that Russia lost after the collapse of the Soviet Union.

Before bringing aides in to join them in the meeting, Trump said the summit was off to “a very good start for everybody.” Earlier, as the summit opened, Trump said their discussions would cover “everything from trade to military to missiles to nuclear to China.”

He didn’t mention a U.S. grand jury’s indictments of 12 Russian intelligence agents on Friday or the Kremlin’s interference in the 2016 U.S. election.

In a bit of gamesmanship, Putin arrived in Helsinki about a half-hour late, while Trump didn’t depart the resort home where he was meeting with advisers for the summit until after the Russian leader arrived at the presidential palace. The meeting was delayed about an hour as a result.

“It is now time to talk in depth about our bilateral ties and sore points in the world,” Putin said in Russian. “There are enough of those that we need to pay attention to.”

Having campaigned on a promise to improve ties with Putin, Trump met the Kremlin leader over the objections of U.S. lawmakers after the grand jury’s indictments of the intelligence agents for their alleged role in meddling with the 2016 election. The Russian agents are accused of hacking email accounts controlled by the Democratic National Committee and Hillary Clinton’s campaign and publicizing messages. The indictments raised the stakes for the Helsinki summit, even as aides to both Trump and Putin ratcheted down expectations.

Trump said in an interview with CBS News broadcast on Sunday that he may ask the Russian president to extradite the agents to the U.S. On Monday, he blamed Special Counsel Robert Mueller’s investigation into the election interference for poor relations between the U.S. and Russia, rather than the Kremlin activities that the Department of Justice began probing in 2016.

“Our relationship with Russia has NEVER been worse thanks to many years of U.S. foolishness and stupidity and now, the Rigged Witch Hunt!” Trump wrote on Twitter as he prepared to meet Finland’s president, Sauli Niinisto, for breakfast.

The Russian Foreign Ministry responded by tweet: “We agree.”

The Putin meeting follows a contentious NATO summit in Brussels last week at which Trump badgered U.S. allies to more rapidly increase their defense spending, insinuating he might withdraw from the alliance otherwise. He continued to castigate U.S. allies during his visit to the U.K., where he involved himself in the internal affairs of British Prime Minister Theresa May and German Chancellor Angela Merkel.

The president also said in a CBS News interview broadcast on Sunday that the European Union is an American “foe” for “what they do to us in trade.” He called Russia a “foe in certain respects.” Trump said at breakfast with Niinisto that the NATO summit was “very successful.”

“They’re paying and they’re paying more rapidly and I think NATO’s probably never been stronger than it is today,” he said.

Trump argues that by urging higher defense spending by NATO countries, he is raising pressure on Moscow. But he continues to face questions about whether he’s playing into the hands of Putin, who has long sought to exacerbate and exploit tensions among Western allies.

“I really think the world wants to see us get along,” Trump said. “We are the two great nuclear powers, we have 90 percent of the nuclear. And that’s not a good thing, it’s a bad thing, and I think we can hopefully do something about that.”

The U.S. president has expressed reluctance to hold Putin to account for Moscow’s election meddling and has indicated he accepts the Russian president’s denials at face value. But U.S. lawmakers of both parties said following Friday’s indictments, which resulted from Mueller’s probe, that Trump must either confront Putin in Helsinki or cancel the meeting in protest.

Trump deflected responsibility for confronting Moscow, saying in tweets and interviews that former President Barack Obama had done nothing to prevent the hacks of Democratic email accounts or to punish the Russians afterward.

The Russian Foreign Ministry said in a statement on Friday that the indictments were baseless and had been timed to poison the mood ahead of the summit. Putin has allowed that non-state actors in Russia — people he likened to “artists” — may have taken it upon themselves to launch cyberattacks on Clinton’s campaign and the DNC.

The drama between Trump and Putin is playing out at the imposing 19th Century presidential palace in Helsinki. Several Senate Democrats wrote to Trump on Saturday to warn him against meeting alone with Putin, to no avail.

Officials at the Kremlin and the White House say Putin and Trump will discuss many of the issues causing the most friction between the countries. That includes Russia’s military incursions into Ukraine and Syria, the Iranian presence in Syria, Russian hostility toward U.S. allies, the arrests of Russian nationals abroad and renewing international arms control treaties.

“This is an attempt to see if we can defuse and take some of the drama, and quite frankly some of the danger, out of the relationship,” Jon Huntsman, the U.S. ambassador to Russia, said Sunday.

One possible outcome of the summit is renegotiation of a nuclear treaty that expires in 2021. Putin may update Trump on negotiations for pro-Iranian militias in Syria to withdraw from areas near Israel in favor of government troops. The Russian leader meanwhile wants to discuss the U.S. seizure of Russian diplomatic properties in the U.S. as punishment for the 2016 election meddling, as well as the arrests of Russian citizens in third countries at Washington’s request.

Russian Foreign Minister Sergei Lavrov said Saturday on RT that the aim of the meeting is merely to open what he called “frozen” channels of communication. Russia was kicked out of the Group of Eight nations after its 2014 annexation of Crimea from Ukraine. Relations have further degraded over Putin’s support for Syrian President Bashar al-Assad in his country’s civil war, and a nerve-agent poisoning this year of a former Russian spy living in Britain that the U.K. government has pinned on Moscow.