Three Stocks to Own in Risky Times 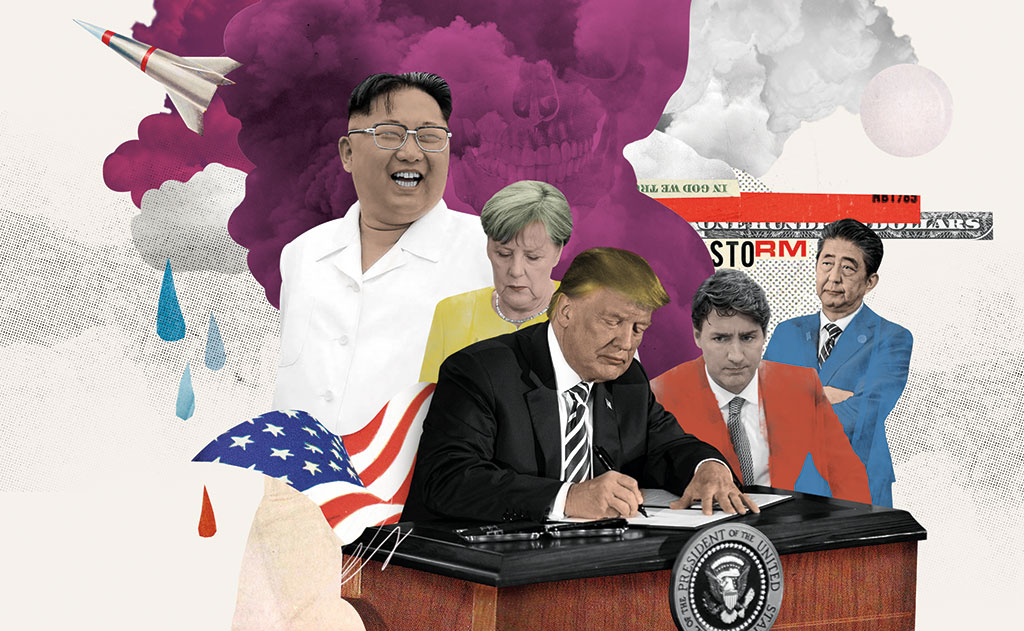 Illustration by Nazario Graziano; All photos via Getty Images

FOR A BUY-AND-HOLD INVESTOR, taking stock of the geopolitical landscape can feel like a disorienting, daily roulette-wheel spin to determine which news story will make you most jittery. What’ll it be: a nuclear face-off with Iran? High-stakes talks with North Korea? Trade spats between the U.S. and its allies? The crumbling of the European Union? Oh, and don’t forget the ongoing investigation into Russian influence on the 2016 election. (Excuse us as we mute CNBC and pop another Xanax.)

It’s not your imagination: By some indicators, the world currently faces measurably more risks than usual. This year, two Federal Reserve economists unveiled a Geopolitical Risk (GPR) Index that tracks occurrences in news reports of “words related to geopolitical tensions.” When international conflict, terrorist threats, or nuclear posturing ramps up, the index spikes. Since 1985, the average daily GPR reading was 81; this May it hit 147—more than 80% above the mean. Investment giant BlackRock, meanwhile, recently launched its own statistical gauge for political risk. It stands nearly one standard deviation higher than its historical average—high enough, BlackRock says, for investors to consider portfolio adjustments.

Here’s the good news: Conflict may be tough on your nerves, but it’s seldom the cause of tough times for stocks. Jeffrey Kleintop, chief global investment strategist at Charles Schwab, recently looked at military actions going back to 1983. He found that even when major attacks occur—think the 2003 U.S. invasion of Iraq, or the 2011 toppling of Muammar Qaddafi in Libya—stock markets typically recover within five days. Still, geopolitics become a financial threat when they create stressful long-term conditions that hurt companies’ profits and discourage investment. That’s why, of all the items on the global-strife laundry list, analysts worry most about trade wars.

Most economists agree that restrictive tariffs hurt growth—and could do more damage today, when more companies rely on global sales and supply chains to sustain profits. The restrictions often backfire on the industries they’re designed to protect: In the 1980s, for example, the U.S. placed tariffs on steel from Japan, but 10 of the 11 largest U.S. steel producers saw negative equity returns from 1982 to 1986, according to the Brookings Institution. The current environment has an added wrinkle, notes Tina Fordham, chief global political analyst at Citi: Countries have considered microtargeting sanctions at specific companies or subsectors. It isn’t hard to envision, for example, China retaliating against Trump administration tariffs by punishing Boeing, which got 13% of its sales from China last year.

WHAT’S THE BEST WAY TO ADJUST to such uncertainty? Historically, the industries that have held up best amid geopolitical risk in general and trade tensions in particular are defense, oil, and consumer staples. Defense stocks look pricey these days, however. Over the past five years, they have risen 20% annually, compared with 11% for the S&P 500, as investors sought to cash in on a growing Pentagon budget. “All the good news is priced in,” says Chris Higgins of Morningstar.

The oil patch looks more promising. Times of turmoil tend to boost crude prices, to the benefit of big U.S. producers—of which the best positioned right now is Chevron (CVX). The company endured criticism for recent investments in new production, particularly in Australia, but many of those wells are coming online just in time to capitalize on rising prices. Then there’s Texas’s Permian Basin, whose stunning energy boom Jeffrey Ball depicted in our Fortune 500 issue (June 1). Chevron’s production there has risen from less than 150,000 barrels a day in early 2017 to about 250,000 today, en route to a planned 650,000 by 2022. Those capabilities, along with an enviable balance sheet—Chevron generated $20.5 billion in cash flow from operations in 2017—make the stock about 25% undervalued today, assuming an oil price of $65 a barrel, says Jefferies analyst Jason Gammel.

Kinder Morgan (KMI), a huge operator of pipelines and terminals, doesn’t benefit immediately from rising oil prices. But as the surge encourages producers to dig more wells and invest in new projects, they’ll sign more of the transportation contracts that account for most of Kinder’s revenue. The company’s $37 billion debt load, a by-product of an infrastructure building spree, has scared some investors away: It trades at a 35% discount to peers in pipeline and “midstream” energy based on estimated 2019 distributable cash flow, says Raymond James’s Darren Horowitz. But its stable income and dominant position in energy infrastructure make it an attractive long-term play.

No amount of global angst will make you stop purchasing food or toilet paper, and analysts expect consumer-staples stocks to benefit if trade tensions hurt other industries. Investors haven’t been impressed so far by aggressive cost cutting at Kraft Heinz (KHC); shares in the packaged-foods giant have fallen more than 35% since rival Unilever rejected its takeover bid in February 2017. But the company now boasts the best profit margins among its food peers, says Edward Jones analyst Brittany Weissman. If Kraft Heinz can start growing revenue again, “the stock will be rewarded for that,” Weissman says. And even if not, its healthy margins could make it look like a haven when investors scurry for safety.

A version of this article appears in the July 1, 2018 issue of Fortune with the headline “Where To Hide From The Headlines.”