From Happiness to Existential Threats, an Evening With Steven Pinker 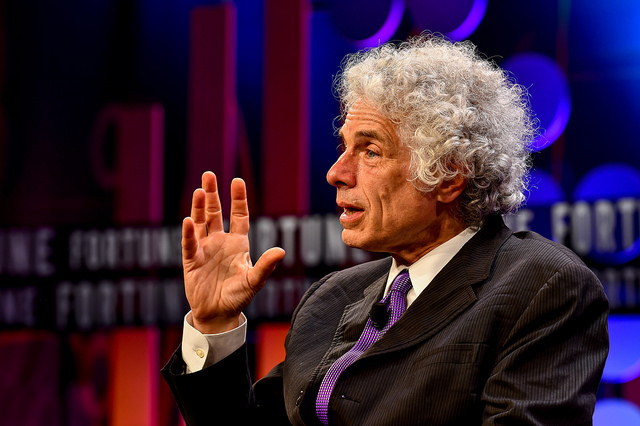 When it comes to dinner conversation, Steven Pinker isn’t one for light fare. On stage with Fortune president Alan Murray, at the Fortune CEO Initiative conference in San Francisco on Monday night, the cognitive scientist discussed a wide range of topics — everything from tracking happiness to quantifying existential threats — all before the salad course was served.

Pinker’s most recent book, Enlightenment Now, is a favorite of Microsoft co-founder Bill Gates and filled with data, noted Murray. But sitting on stage in front business leaders who pour over terabytes of data every day, the author adeptly contrasted what what we think we know through instinct with and what we can actually prove through analytics.

“We did not evolve in a world with data, we evolved in a world with experience,” said Pinker. “Our brains are calibrated to assessing risk and probability by examples that come to mind…. the faster something comes to mind, the more probable we think it is.”

For instance, in reading about shark attacks, tornadoes, terrorist strikes, or rampage shooters in the news, people begin thinking that these events are common, when in fact they aren’t, he said.

“In a lot of measures, yeah, things are bad now, but they were even worse before,” said Pinker. And failing to plot data over time can mistakenly over-inflate more recent data’s impact.

Take, for example the challenges we face today, like a multi-front nuclear threat or climate change. “War and homicide and rape and violence against children are deplorable problems now,” said Pinker, “but they were even worse a few decades ago.”

The message resonated with conference attendees not merely looking to make a difference in their companies or industries, but in society and the world overall. Fortune CEO Initiative is an annual gathering of corporate leaders focused on addressing major global problems, a mission that evolved after a historic meeting between Pope Francis and 100 CEOs at the Vatican in December 2016.

Murray was keen to explore a chapter of Pinker’s book devoted to the concept of happiness — specifically the question of if everything is better now than it was 100 or 200 years ago, why aren’t we happier today.

According to Pinker, 85% of countries actually are happier now than they were then, but the U.S. isn’t one of them.” In the United States, happiness has flatlined for 70 years,” said the Pulitzer-nominated author.

But, said Pinker, it’s hard to tell why Americans are so down, because several generations turned over during that span, which ranged from the G.I. generation to the baby boomers to Generation X.

“The baby boomers are kind of an unhappy generation,” said Pinker. “They’ve pushed the statistics around in an unhappy direction at every stage of their lifespan.”

Upon hearing that, Murray prodded the room to raise their hands if they were baby boomers — and a generous amount obliged — and then keep them up if they were happy, and most remained up. Pinker, again, was quick to note an obvious trend in the room filled with well paid executives: “It must be said, that happiness correlates with income.”