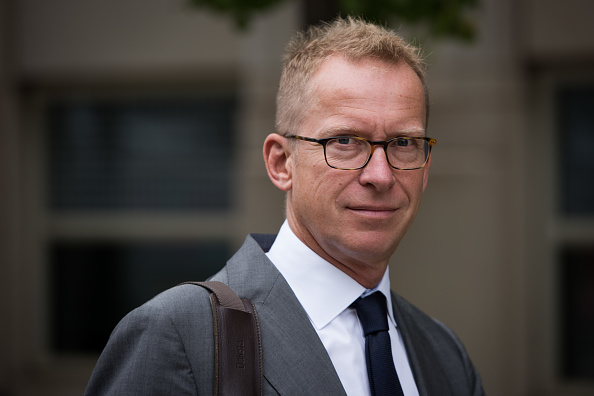 Former HSBC Holdings Plc currency trader Mark Johnson, the first person to be convicted in a global crackdown of currency rigging, was sentenced to two years in a U.S. prison as a judge turned aside his request for home detention in the U.K.

He was immediately taken to prison.

A federal jury found Johnson, 52, the bank’s former global head of foreign exchange, guilty of nine counts of wire fraud and one count of conspiracy for front-running a $3.5 billion client order in December 2011. He was convicted in October after a monthlong trial in Brooklyn, New York.

U.S. District Judge Nicholas Garaufis said that U.S sentencing guidelines indicated Johnson should face up to nine years in prison. But he gave Johnson a shorter term due to his strong family ties, his work with children and that as a U.K. national, he would be separated from his family.

“A brief prison sentence is necessary, but anything greater is punitive,” Garaufis said.

Garaufis rejected a request from Johnson’s lawyers to allow him to surrender after surgery.

The case was victory for American prosecutors, as Johnson was the first person to be tried since the global currency-rigging scandal that resulted in the world’s largest banks paying more than $10 billion in penalties. In January, HSBC paid $100 million to resolve a U.S. Justice Department probe into the rigging of currency rates tied to the case.

In an industry with “a culture of cheating,” prosecutors said sending Johnson to an U.S. prison would serve as a deterrent for other traders considering rate-rigging, crimes which the government said are very difficult to prove. Prosecutors had sought a term of at least seven years for Johnson and a fine of $300,000, arguing he participated in a scheme to aggressively trade in a practice known as “ramping.”

The bank was hired by Cairn Energy Plc to convert the proceeds of the sale of a subsidiary from dollars into pounds. Johnson and his colleagues promised to “drip feed” the transaction to avoid an unexpected rise in the rate. Cairn was defrauded because it paid a higher price for the U.K. currency, according to testimony from a government expert.

Confronted by Cairn officials about the rise in the pound, the U.S. said Johnson’s co-conspirator Stuart Scott then falsely blamed it on an order by a Russian Central Bank, when none was placed with HSBC that day, according to the government. Scott, the former head of the bank’s currency trading in Europe, is in the U.K. fighting extradition.

Johnson took the stand at his trial, insisting Cairn got a “fair” price, arguing HSBC was only “pre-hedging” the trade. Johnson also sought to distance himself from the transaction, saying he’d left Scott, who was in London, in charge of the trading desk while he was in New York on the day of the Cairn trade.

Johnson, a U.K. citizen with a home in Hampshire, asked to serve a term of house arrest in the U.K. doing community service. Almost 130 relatives, friends and former bank colleagues wrote to Garaufis seeking leniency. Johnson’s wife, Diane Minihane, and his lawyers argued he was punished enough by being prosecuted and that further separation from his six children would be unnecessarily harsh.

Prosecutors used HSBC’s recorded calls which they said showed real-time talk of the front-running, including one in which Johnson and Scott discuss how high the price of the pound could rise before the client would “squeal.” In another, in Johnson tells Scott, “I think we got away with it.”

The government also had emails and instant messages by Johnson and his colleagues. They said Johnson sent out a message using the code words “My watch is off,” it alerted at least 10 other traders on both sides of the Atlantic to began a buying spree of pounds that dominated the market minutes before the 3 p.m. deal.

Daniel Mantini, a former currency trader at Salomon Smith Barney and Bear Stearns who left the industry in 2012, said sending Johnson to prison would be a “travesty of justice.”

“If they were going to arrest every foreign-exchange dealer for front-running big orders and/or talking smack over the phone there would be many thousands in jail,” Mantini said. “This guy was in the wrong place at the wrong time.”