How to Take the Internet Back From the Tech Companies 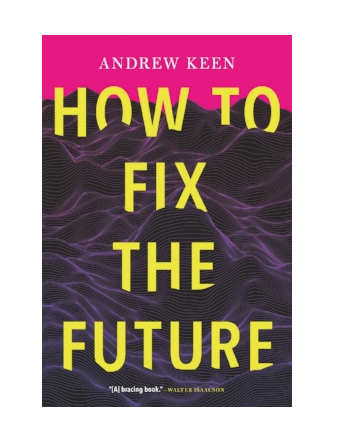 Something has gone wrong with the Internet. Once billed as a tool for building community, the web has devolved into an ungovernable swamp of hate, surveillance, and distraction. Andrew Keen, an author and tech entrepreneur, is hardly the first to point this out, but his ambitious new book, How to Fix the Future, makes what might be the most forceful case yet.

A sweeping account of Big Tech’s growing takeover of our lives, the book examines everything from Silicon Valley monopolies to the sinister social media monitoring of the Chinese government. It shows why, if given the chance, we’d never build the Internet we have now: As a centralized advertising economy that strips wealth from creators, and feeds personal data to giant corporations. Keen’s account grows darker as he recounts how an explosion in artificial intelligence could soon snuff out humanity.

Fortunately, that’s just part of the book’s message. Unlike some recent anti-tech jeremiads (including Keen’s two earlier books), the author portrays our current Internet dystopia in a larger context of human history. He points out that people have constructed terrible technology before, notably the 18th century “Satanic Mills” powered by child labor and the grim slaughterhouses that produced tainted meat and made the streets of New York and Chicago run red with blood. Keen also cites more recent example, including the auto industry’s “chrome coffins” that created carnage on U.S. highways in the mid-20th century.

In each case, a mix of social pressure and technological refinements helped tame a cruel new order, and reaffirmed human dignity over machines. The question now, of course, is whether we can do so again and remake the Internet into a more benevolent place.

Keen concedes he’s not sure, but embarks on a worldwide search for the most promising possibilities. He finds enlightened government leaders in Estonia and (to a lesser extent) Singapore who have learned to deploy always-on Internet technology in a way that increases civic trust . In Brussels, he talks to E.U. Commissioner Margrethe Vestager, who is bringing the likes of Apple and Facebook to heel over tax avoidance and privacy violations. Keen also finds inspiration in the United States, talking to “hacktivist” coders in Oakland and recounting the visionary ideas of John Borthwick, who founded the startup incubator Betaworks, and who offers an action plan to wrest back control of our digital lives.

Keen’s primary frame for the work is Utopia, Thomas More’s celebrated 1516 work that was written in an age that experienced some of the same turmoil and dread as our own (there are extended riffs on Moore’s Law versus More’s Law). Keen also peppers his pages with the insights of Locke, Marx and Kant to better ground our Facebook-era anxieties.

While the book is stuffed with helpful big picture observations, it doesn’t offer much in the way of specific on-the-ground ideas—though Keen does call for reforms to data privacy and gig economy labor laws, and for a serious discussion of a universal basic income. Weaker elements include a filler chapter on education reform, and a one-sided screed about YouTube and Spotify that could have been written by the entertainment industry.

These small shortcomings, though, don’t detract from Keen’s overall effort. How to Fix the Future is a truly important book and the most significant work so far in an emerging body of literature—others of note are Tim Wu’s The Attention Merchants and Zeynep Tufekci’s Twitter and Tear Gas—in which technology’s smartest thinkers are raising alarm bells about the state of the Internet, and laying groundwork for how to fix it.