Flying Cars, Bike Share, and Space Tourism: How You’ll Be Traveling in 2018 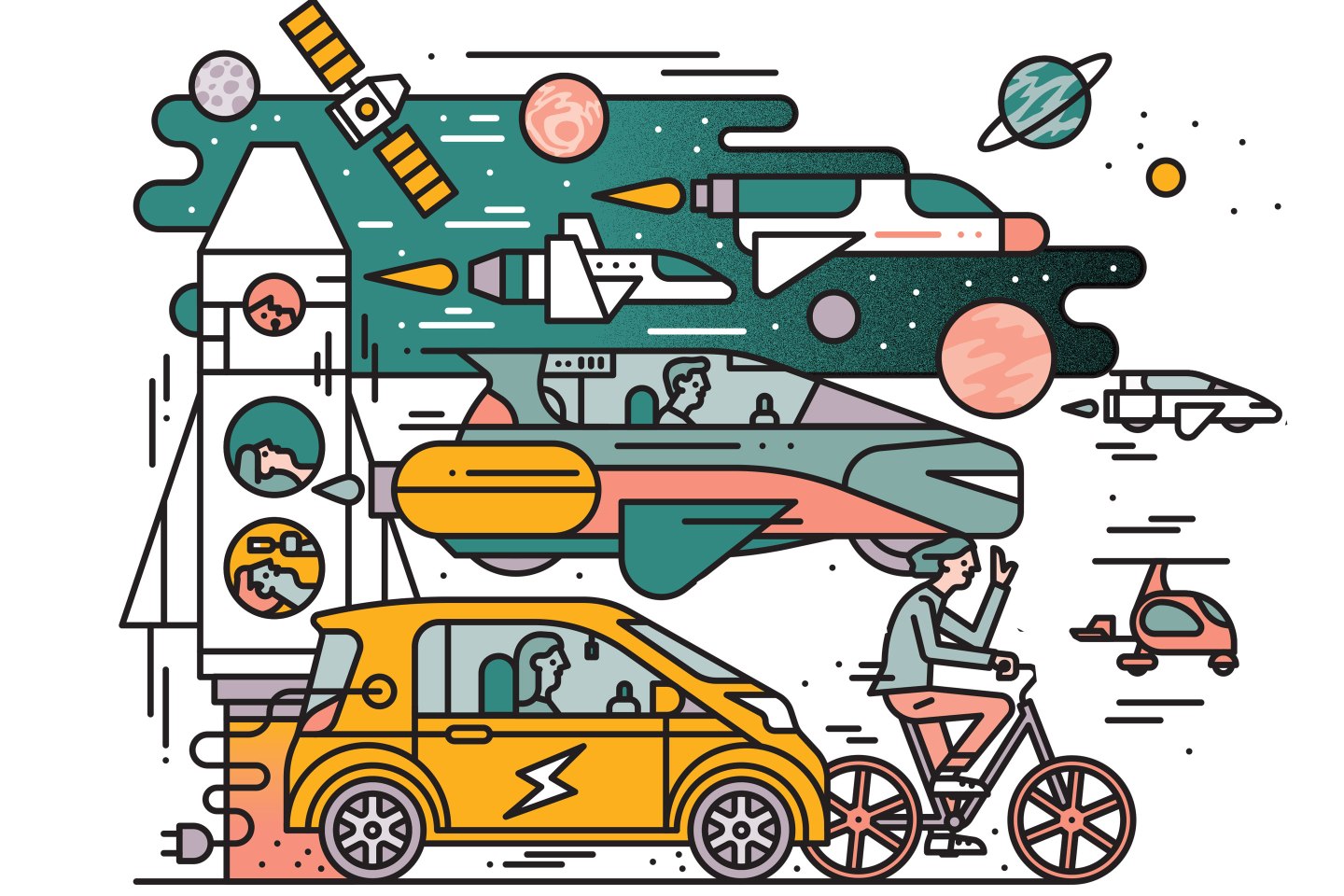 Illustration by Sam Peet for Fortune

The article is part of the Fortune 2018 Crystal Ball, a series of predictions for the year ahead. Find the whole list here.

Next year will see breakthroughs in zero-emissions vehicles that could help save the planet—and rockets that may one day help us escape it. Here, Fortune’s predictions for the future of transportation.

The Hype and the Loop

The hyperloop is, first, a concept, introduced by Elon Musk. It is also a company, Virgin Hyperloop One, building a test track in North Las Vegas. It is also several other companies and universities building various pieces of the magnet propelled carts through high-speed vacuum tubes. And it might, one day, exist as a real loop, carrying cargo then people between cities.

Only: Several of the most likely spots—with the most space to build and the deepest pockets for building—are in the Middle East in politically fraught regions rapidly devolving into a proxy war between Saudi Arabia and Iran. Engineering is easy compared to the complexities of people, nations, and geopolitics.

Even if Washington is resistant to paving the way, global sales of all-electric cars are set to surge 70% in 2018, up from 580,000 this year, according to LMC Automotive.

Both Elon Musk and Richard Branson say they’ll send tourists to space next year. (Jeff Bezos is targeting 2019.) A few of the A-listers reported to have signed up to one day travel with Branson? Angelina Jolie, Stephen Hawking, Justin Beiber, and singer Katy Perry (but that one might be a return trip).

Silicon Valley investor Peter Thiel one famously said, “We wanted flying cars, instead we got 140 characters.” Putting aside Twitter’s recently expanded character limit, the guarantors may hold up their end of the bargain yet. Uber is set to launch a flying taxi pilot program in L.A. Kitty Hawk, the hovercraft-maker backed by Alphabet CEO Larry Page, plans to sell its consumer transports before the year is through. Our bet: Tesla CEO and mobility futurist Elon Musk (coincidentally, onetime partner of Thiel at PayPal) joins the sky-race with an aeronautic venture of his own.

Bike-sharing is hardly a new concept. But a fresh take on the conventional transportation system has taken China and Europe by storm. Now it’s making its way into U.S. markets.

This new, more flexible “dockless” system lets users park and secure rented bikes anywhere using a QR code or with an app. Expect this free-floating system to gain traction in the U.S. market in 2018, a trend that promises to attract a new batch of competitors.

The bike-sharing market is hardly settled. This new system could unseat established companies that operate more traditional programs and cause cities to rethink their approach. It could also encourage city leaders wary of bike-sharing to finally jump on board.

A version of this article appears in the Dec. 1, 2017 issue of Fortune as part of the Fortune 2018 Crystal Ball package. Click here to see our full list of predictions.