Puerto Rico’s Economy Was a Mess Before Hurricane Maria. It Will Only Make Recovery Harder 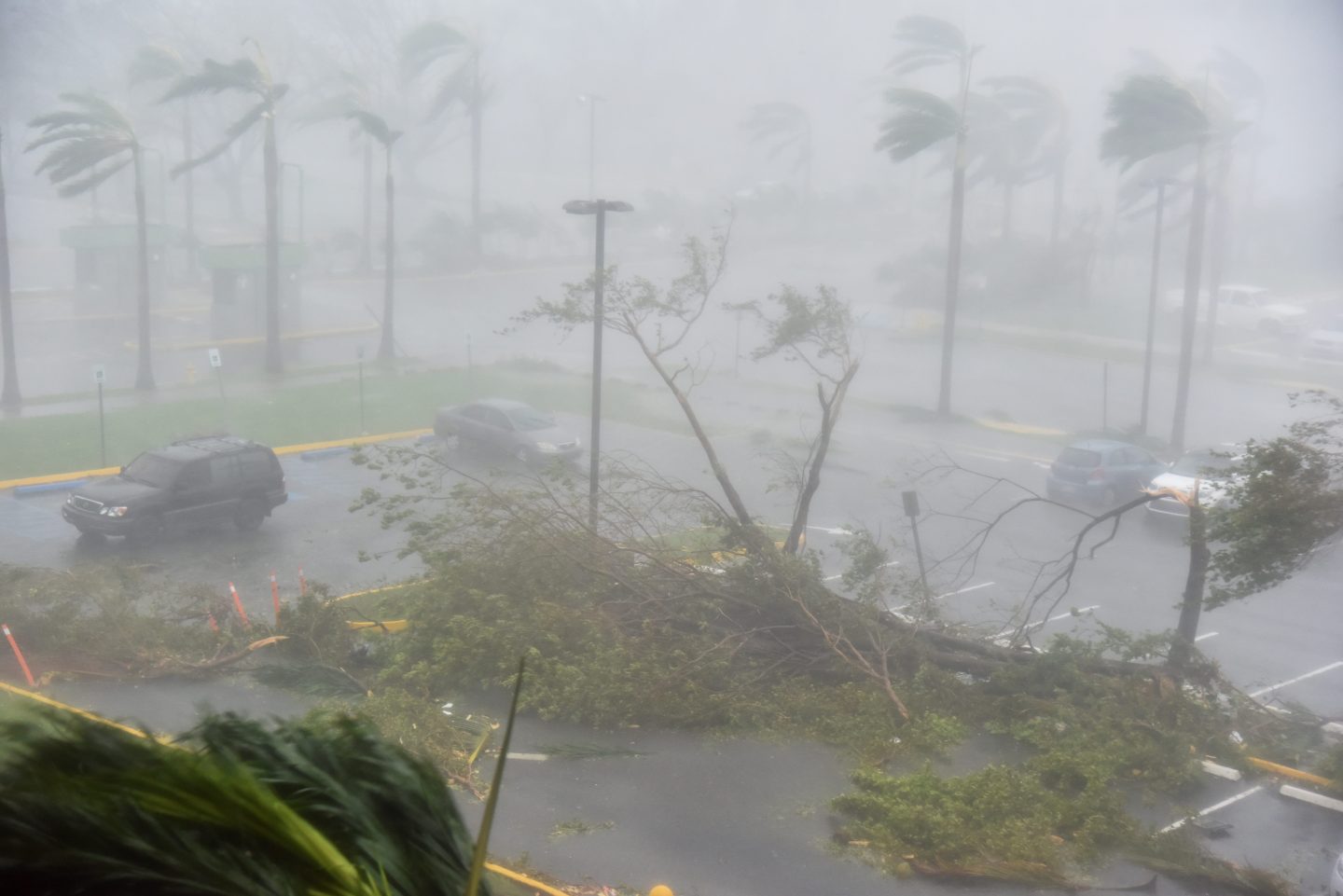 Trees are toppled in a parking lot at Roberto Clemente Coliseum in San Juan, Puerto Rico, on September 20, 2017, during the passage of the Hurricane Maria. Maria made landfall on Puerto Rico on Wednesday, pummeling the US territory after already killing at least two people on its passage through the Caribbean. The US National Hurricane Center warned of "large and destructive waves" as Maria came ashore near Yabucoa on the southeast coast. / AFP PHOTO / HECTOR RETAMAL (Photo credit should read HECTOR RETAMAL/AFP/Getty Images)
Hector Retamal — AFP/Getty Images

With six dead, millions of residents facing months without electricity, and far-flung relatives desperately trying to contact their loved ones, Puerto Rico is only just beginning to grapple with the fallout from Hurricane Maria, the strongest storm the island has faced in nearly a century. Looming over those recovery efforts is a vital question: Who will foot the bill for the estimated $10 billion in damages?

The answer would be complicated enough for a financially healthy Puerto Rico. But the island’s economy was in shambles well before Hurricane Maria ever formed. Puerto Rico declared a form of bankruptcy in May, facing a crushing multi-billion dollar debt load following years of financial mismanagement. For the last decade, the government hasn’t had the funds to repay its creditors or improve its aging infrastructure, let alone deal with the ramifications of a major hurricane.

Officials are taking some steps to address the problem. The Commonwealth has been allowed by a federally organized task force overseeing its economy to reassign $1 billion from its current budget to emergency response and repair, according to its largest daily newspaper, El Nuevo Dia. Meanwhile, President Donald Trump has approved additional federal disaster assistance.

But experts say that may not be enough.

“In general, the disaster relief system is structured so people are meant to rely on their private insurance,” says Professor James Kendra, director of the Disaster Research Center at the University of Delaware. Through FEMA, for example, individuals can only receive a maximum of $33,300—hardly enough to rebuild a house, especially in Puerto Rico where just about 50% of houses in the territory are covered by insurance. How and to what degree Puerto Rico will fund repairs for essential public facilities, such as the bankrupt power authority, also remains unclear.

Further complicating matters is that Puerto Rico’s economic history will limit its fundraising options. With $74 billion in debt and $49 billion in unfunded public pensions, the island has no access to capital markets. Even if it did, willing investors would be hard to find — Puerto Rico’s current bondholders are already nervous that Hurricane Maria will make it tougher for them to collect on their repayments, as the expected post-Maria tourism drought will mean in lost tax revenue.

“Puerto Rico has exhausted its financial resources,” says Hernando Montero Salazar, director of Credit Analyisis at Stoever Glass & Co. “That will leave them strictly with the options of the federal government to provide aid and restore infrastructure. That’s the only way Puerto Rico will be able to put themselves together.”

Yet Puerto Rico may find it difficult to appeal to Congress, where, as a U.S. territory, it has no voting power. Additionally, lawmakers there have long chastised Puerto Rico for the mismanagement that led to its bankruptcy — particularly the fiscal conservatives who currently control the legislative branch. And even though its finances are now largely in the hands of the federal task force, the island’s track record could make it harder to officials to ask for more money. “With a Republican majority, they could attack [too large a package] as part of a bailout,” says Amilcar Barreto, an associate professor at Northeastern University.

Even if Puerto Rico gets the money it needs to rebuild over the next few months, its long-term prospects remain grim. Unlike Houston, which had a flourishing economy when Hurricane Harvey hit, Puerto Rico has been struggling for years. The Commonwealth’s woes can be traced back to 2006, when a tax break for U.S. companies expired. An exodus of jobs soon followed, with the unemployment rate reaching over 12% earlier this year, more than double the overall U.S. figure. As the jobs left, people began to follow. The island’s population has shrunk to about 3.5 million from 3.8 million in 2000.

Hurricane Maria could accelerate that trend, says Amilcar Barreto, an associate professor at Northeastern University. With the power authority predicting months of outages, Puerto Ricans may continue to flee the island, making it even harder for it to regain economic steam. “For many businesses, dealing with a fiscal crisis was bad enough,” says Barreto. “I question whether or not good will be good enough.”

If there’s any silver lining, it’s that seeing images of the devastation wrought by Hurricane Maria could push lawmakers in Washington to open the coffers. That could help rebuild critical infrastructure, get the power back on, and start the long slog towards recovery. “There will an economic black hole for a good part of the year,” predicts John Mousseau, the director of fixed income at money management firm Cumberland Advisors. “[But] if you get this rebuilding underway, you start seeing Puerto Rico turning the other way.”