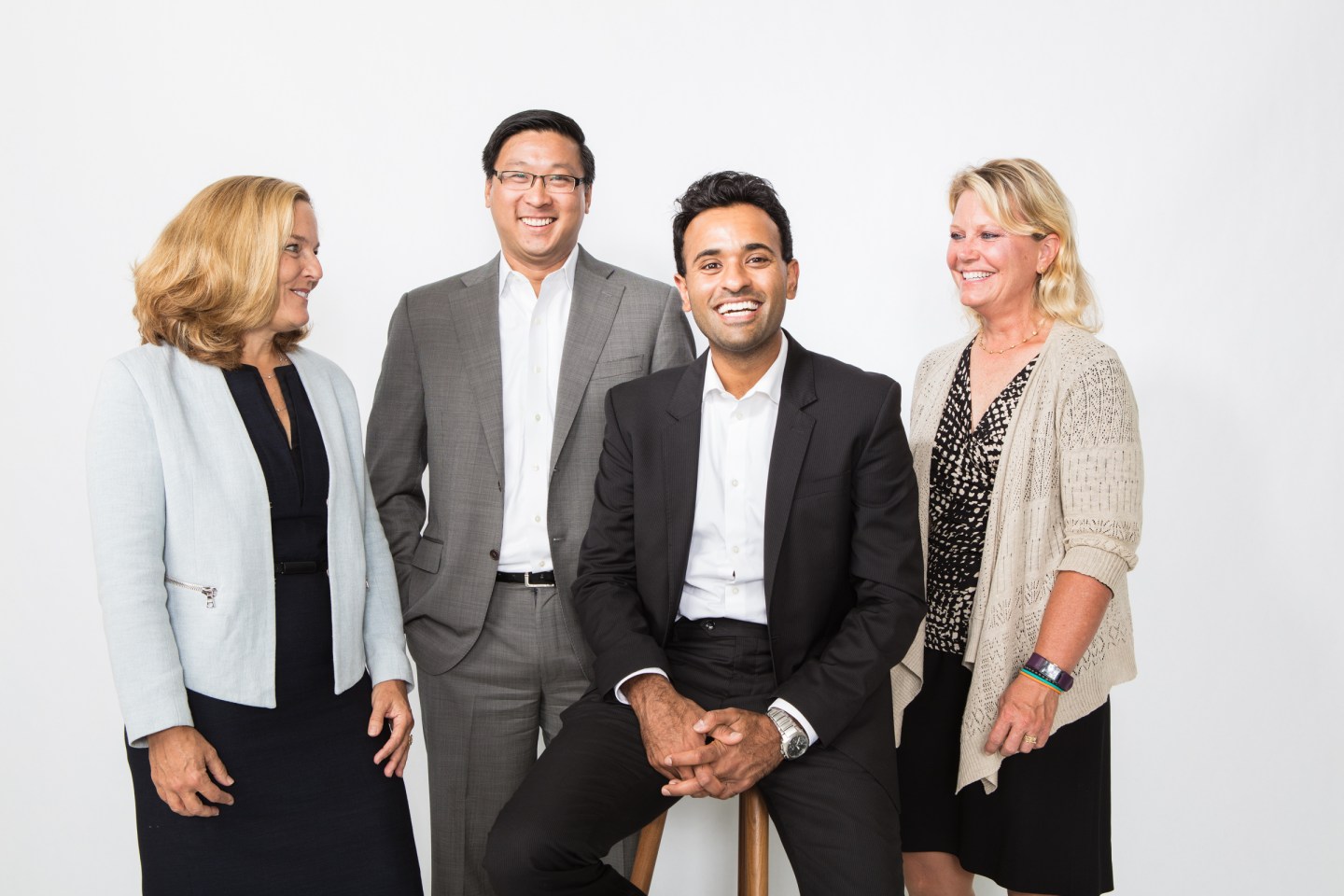 Vivek Ramaswamy got a pretty special present for his 32nd birthday in August: $1.1 billion in funding from SoftBank and other investors for the audacious biopharmaceutical firm he founded and leads, Roivant Sciences. That’s the single biggest private financing round for a health care company ever. And the former hedge funder-turned-biotech CEO is dead set on using it to help Roivant succeed in a new approach to drug development—with the help of an impressive cadre of long-time bipopharma vets who have bought in to the ambitious wunderkind’s vision.

Fortune spoke with Ramaswamy and four of his member company CEOs to discuss how Roivant’s brash, ambitious model seduced long-time pros who know the heartaches of trying to create groundbreaking drugs.

Roivant has a fascinating structure and modus operandi which sets it apart from the thousands of pharma outfits which have cropped up over the years. For one, Roivant itself is an umbrella organization which houses a federation of drug and health care companies, each of which is focused on a different area of medical development and comes with the “Vant” suffix. Axovant is focused on Alzheimer’s and dementia; Myovant on women’s health; Enzyvant on rare diseases; Dermavant on skin conditions; and Urovant on urological disorders. There’s also a Datavant focused on health care data and analytics and multiple other arms planned for the future, including in the digital health space, Ramaswamy tells Fortune.

Ramaswamy and his motley crew of life science executives say this structure allows the companies to work under a model which facilitates both collaboration and flexibility; each firm can pursue its own needs, but can also rely on broader Roivant resources to fuel operations and new ideas. For instance, Ramaswamy has taken some of these companies public (i.e., Axovant and Myovant, which had blockbuster IPOs) to raise cash while keeping others private. “For some companies, going public makes the most sense. For others, remaining private is preferable. The point of keeping the companies separate is to provide flexibility—and to scale big while still feeling small,” Ramaswamy says.

But perhaps what’s even more intriguing than the corporate layout is Roivant’s general drug development approach. Unlike traditional pharmaceuticals, its member companies don’t try to start from scratch; rather, they scoop up experimental treatments abandoned by other pharma companies for one reason or another—incompatibility with the overall drug pipeline, the expenses of late-stage clinical trials, a general lack of enthusiasm, justified or not, surrounding an experimental therapy—through acquisitions and licensing deals in order to shepherd them through the regulatory process.

For instance, Urovant has a bladder disease treatment licensed from pharma giant Merck. Intepirdine, a drug ditched by GlaxoSmithKline that Axovant CEO David Hung—the former chief executive of Medivation, which created the milestone prostate cancer drug Xtandi and was eventually bought by Pfizer for a cool $14 billion last year—hopes to turn into the first new Alzheimer’s therapy approved by the Food and Drug Administration (FDA) in 15 years.

That’s a bold strategy with plenty of downside. In fact, in some ways, the entire model is a proof of concept. But that hasn’t deterred the executives who have jumped on to the Roivant bandwagon—a team which includes Myovant CEO Lynn Seely, another Medivation alum intimately involved with developing Xtandi; Enzyvant CEO Alvin Shih, formerly of Retrophin and the rare diseases unit at Pfizer; and Dermavant executive chairman Jackie Fouse, the former president and COO of biotech giant Celgene who turned industry heads by heading to Ramaswamy’s outfit in July. Earlier this week, former Avanir CEO Keith Katkin was appointed chief executive of Urovant.

This isn’t a group to be taken lightly. They share decades of medical, biopharma, and overall corporate industry experience between them and have been involved in cutting edge life science innovation over the years. So just what makes them so confident in Ramaswamy and Roivant?

“Energy, intellect, and passion,” says Seely. “I came to Myovant by serendipity and at the end of the day was just completely energized by what they were trying to do. This concept of creating value by more efficient and effective drug development and commercialization. And so I think it was really that the energy and passion that convinced me to come here.”

Shih nods his head in agreement. “The other thing that really drove my decision was the chance to make an impact on patients’ lives in a very directed, very efficient, and very quick way, especially for people suffering from rare diseases,” he says. “It’s a very focused version of drug development that cuts out a lot of the clutter.”

This is an argument made by all of the Roivant CEOs. There’s a sense that the company has the can-do moxie of a startup—except one that’s led by people with decades of scientific and pharma industry know-how. “Everything that’s done here starts at the science level. Science and unmet medical need—it’s not just repurposing drugs just to say we have something,” as Fouse puts it.

None of the Roivant firms actually have a drug on the market yet. But their experimental candidates have shown at least some semblance of promise in previous trials, according to the CEOs. Some, like the Axovant Alzheimer’s therapy intepirdine, just may not have been tried out in the right doses or with the right patient pools, says Hung. When asked how he thinks Axovant succeed in a disease space where so many others have failed, Hung replies, “In general, you have to take a diversified approach when it comes to complex illnesses.”

Key data from a late-stage trial of intepirdine is due this month, and it could prove a make-or-break moment for Axovant and Roivant at large. Enzyvant’s RVT-802, an experimental treatment for chromosome defect disorder DiGeorge Syndrome, recently received the FDA’s Rare Pediatric Disease designation and will likely face a critical 2018.

Ramaswamy smiles and admits that, ultimately, the proof will be in the pudding. “If we can validate our scientific bets in the clinic, if we can bring valuable new treatments to patients that need them, that will be our ultimate measure of success,” he says, acutely aware of his skeptics.