This Is the Most Name-Dropped Brand in Music 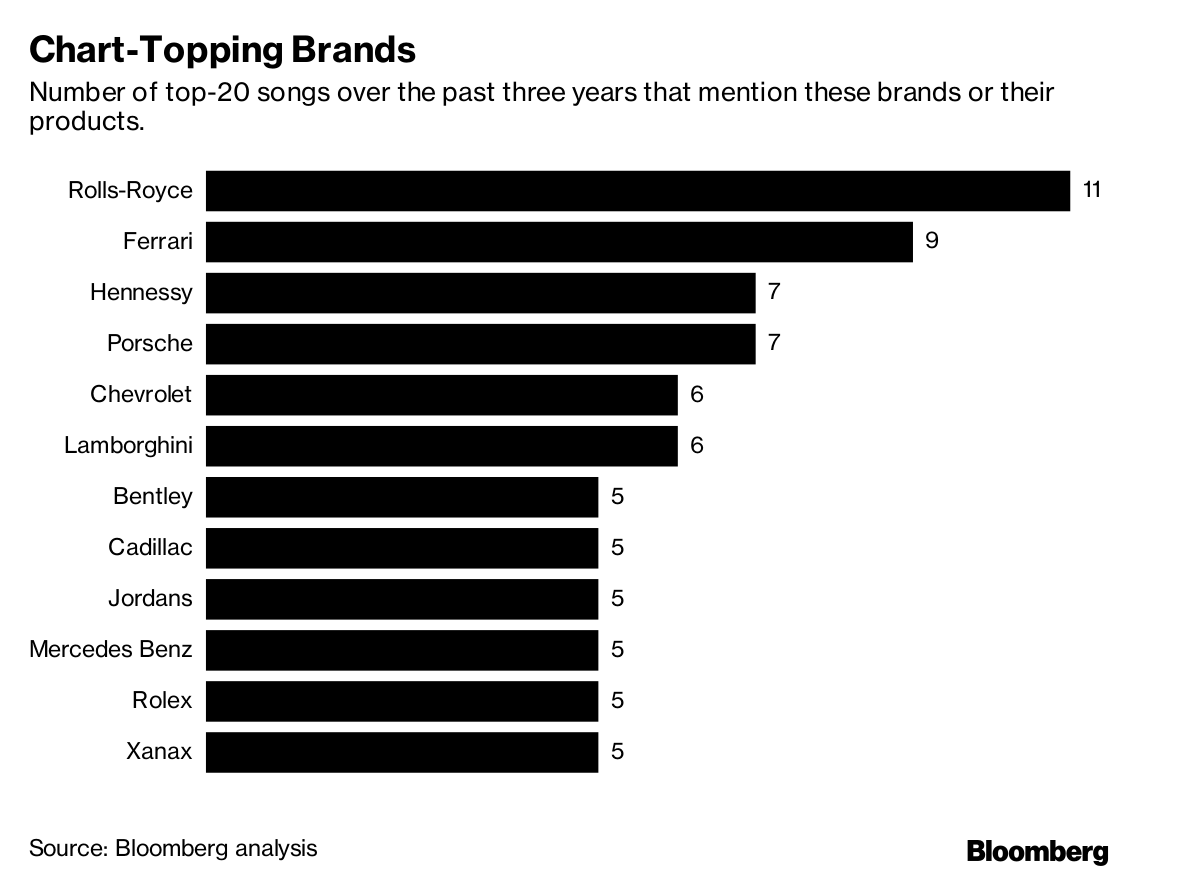 “Park the Benz, just to ride the Wraith,” Quavo raps in Drake’s song “Portland,” which peaked at No. 9 on the charts this year. That Wraith he’s so thrilled about is a $300,000 automobile made by Rolls-Royce Motor Cars Ltd., which has quietly become the king of pop-culture music references, appearing in more top songs than any other brand.

Not Mercedes-Benz, not Ferrari, not even Lamborghini. Rolls reigns.

Particularly with the ascension of hip-hop, brand references became a shorthand for aspiration and status. As such, they’re also a good barometer for your brand’s cool factor, or its imminent dilution, depending on your marketing strategy. Bloomberg analyzed tracks that made it into the top 20 spots of Billboard’s Hot 100 over the past three years and found that eight of the 12 most popular product mentions have four wheels.

Rolls-Royce tops the list, featured in 11 different tunes by such artists as Future, The Weeknd, and Kodak Black. Ferrari is a close second. Chevrolet, Lamborghini, Bentley, Cadillac, Mercedes-Benz, and Porsche each get touts in several songs. Among non-car shout-outs, old standbys Hennessy cognac and Nike’s Air Jordan sneaker label got the most. We also found that it’s not just alcohol, guns, clothing, and super luxury making it into songs anymore—software, cookware, and even Band-Aids are making the grade.As far as the song including the most name-checks, the crown goes to “Bad and Boujee” by hip-hop group Migos, which climbed all the way to the No. 1 spot on the charts early this year. It includes 19 brand mentions, from Instagram and Klout to Segway scooters and, um, Crock-Pot slow cookers. Car references are sprinkled throughout the song, too. They rap about a “lamb” and a “frog,” nods to Lamborghini and Porsche. There’s also a reference to the Ferrari 458 Spider, a drop-top convertible that costs more than a quarter-million dollars. The Rolls-Royce Ghost gets some attention as well.

Across the 280 songs we reviewed, 212 brands are highlighted. Cars, fashion, television, and movies make the most appearances, followed by technology, alcohol, music, and drugs. Many are prestige items like Rolex watches or Gucci jackets. Others are less glamorous brands, such as Kit Kat candy bars, Grey Poupon (thank you, Kendrick Lamar), and 7-Eleven convenience stores. Drug brands range from Rolaids to Xanax. The universe of dropped names is huge: Everything from Barbie dolls to Glock pistols, Trojan condoms to A1 steak sauce.

Most references come from hip-hop tracks or a rapper who sings a few verses in a pop song. But not all: Taylor Swift, for instance, has brand mentions in her hits, such as Band-Aid bandages in “Bad Blood” and Polaroid cameras in “Out of the Woods.” Katy Perry includes Dom Perignon in “Birthday.” Meghan Trainor even managed to squeeze a reference to software—in this case, Adobe Photoshop—into her chart topper “All About That Bass.”

The obvious question when musicians mention obscure brands is, are they getting paid? Sometimes they do. As with television shows and feature films, brands like to insert themselves into pop culture, and music is no different. Dozens of music videos show off stuff from Beats, the Jimmy Iovine/Dr. Dre headphones brand owned by Apple Inc. The item appears in several of Lady Gaga’s music videos, from her breakout hit “Just Dance” to “Poker Face” and “Telephone.” Beats Pill speakers, meanwhile, are clearly visible in videos from Britney Spears, Miley Cyrus, and Nicki Minaj.

It’s often unclear what’s a paid placement and what’s not, however, since artists generally don’t disclose the deals. No, Drake wasn’t paid by Rolls-Royce to include the Wraith in “Portland,” or its bigger and pricier cousin, the Phantom, in “Jumpman,” according to the manufacturer. But Chris Brown’s 2008 hit “Forever,” which featured the line “double your pleasure,” turned out to be an extended version of a chewing gum jingle for Wrigley’s Doublemint. “Sometimes they do it because they hope to get the company interested in them”

There’s a middle ground, however. Rolls-Royce, for example, will sometimes provide cars to be featured in music videos, said company spokesman Gerry Spahn. When someone uses the car as a shorthand for luxury, it helps the brand, he said. And besides, celebrities and musicians make up about 20 percent of the automaker’s customers, so it has the potential to be a sales strategy, too.

The $400,000 Phantom is Rolls-Royce’s signature vehicle, but the company has attracted much hype for three other models it’s released since 2009: the Ghost, Wraith, and Dawn. All have garnered song mentions, with the Wraith topping the tally with four.

While parent company BMW AG keeps close tabs on the Rolls-Royce brand, Spahn said they’re more than happy for the exposure. Last year, Rolls-Royce had its second-highest sales numbers ever, delivering more than 4,000 cars to wealthy customers around the world. Even if the car’s desirability increased, production constraints limit the company to a maximum of 6,000 cars a year, said a person with knowledge of its operations.

More demand for limited supply, of course, makes the car even more exclusive. So for a company like Rolls-Royce, what’s the actual financial value of all those brand mentions?

“Assigning a value to a product placement in a music video, or TV show or video games, is completely different from the way traditional commercials work—which values how many people watched it,” said Cristel Russell, an associate professor of marketing at American University. “So you wouldn’t want to use the same type of metrics and value measure for something that advertises on a subtle basis.”

“We make no judgments. We want to be connected to success”

Russell, who studies product placement, said even if a company doesn’t pay for placement, the mention might still come with an indirect financial return for the artist. “Sometimes they do it because they hope to get the company interested in them and eventually get some type of promotional gig,” she said. “It’s their way of saying, ‘Hey, I like your car.’ Not an immediate financial return for them, but it’s an eventual exchange of services.”

Others consider that kind of exposure negative. Take the famed spat between rapper Jay-Z and Champagne brand Cristal. It began more than a decade ago, when Cristal executive Frédéric Rouzaud decried rappers’ penchant for bragging about their bottles of the pricey bubbly. “What can we do?” he lamented in a 2006 interview with the Economist. “We can’t forbid people from buying it.”

Jay-Z took offense, called for a boycott, and stopped rapping about it. About a year later, he started touting Armand de Brignac, another fancy Champagne that earned the nickname “Ace of Spades” for its flashy logo. Jay-Z coincidentally has a financial interest in that label. Years later, Cristal was still throwing jabs at the rapper who shunned it.

Rolls-Royce, meanwhile, is one of those brands that believe that, if not all, most publicity is good publicity. “We make no judgments,” said Spahn. “We want to be connected to success.”